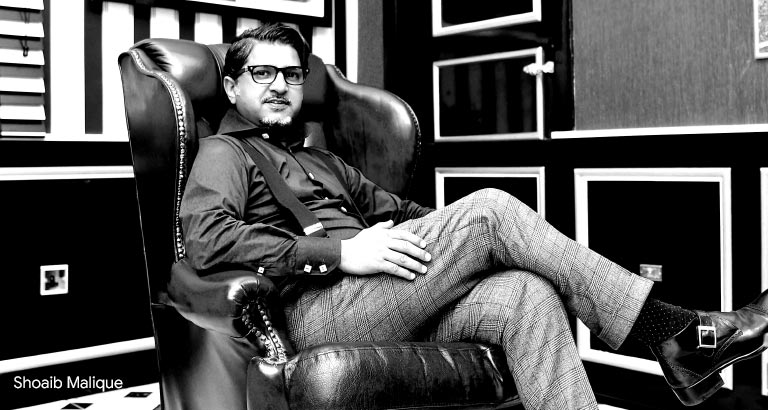 Shoaib Malique tells Behnaz Sanjana his story of going from a young intern at a perfumery to presenting bespoke perfumes from his very own brand to royalty and famous personalities.

The scents of oud, amber, musk, rose, vetiver and the like, which are intrinsic to Middle Eastern heritage, have been familiar to Shoaib’s keen olfactory senses since a young age. Amongst the well-known perfumers of Bahrain, his Dar Al Teeb – House of Fragrance – is one of the top contenders. “I started the company from scratch in 1999, when I had nothing,” he says. “I am a self-made man.”

Shoaib remembers working at Ashraf’s in the souq of old Manama, first in his summer holidays and then alongside his studies, eventually falling in love with the idea of perfumes. He went on to work with a well-known perfumery, where he rose to the designation of general manager. But that wasn’t enough for the ambitious young man, who knew he had the acumen and instinct to make his own name in the business. “More than achieving a goal, it was passion for perfume that led me to it,” he says.

Shoaib jokes that his keen sense of smell is a boon and a bane. “I’ve got a very sharp nose and can tell what ‘s cooking in the kitchen when I enter the house. I can also smell people; I’m like a German Shepherd.”

He is involved in Dar Al Teeb’s every exotic scent, from conception to packaging. He says: “To be successful, you have to be an innovator, not an imitator. A fragrance is very personal. It speaks about your character, your personality. It should make heads turn, become your identity, evoke memories.”

The beginning of 40 years as a perfumer were difficult. “In this business, it’s the survival of the fittest. Taking a slice of the market share was a tough game, especially when you don’t have any financial backing. But I believed in myself, being a kamikaze guy, diving head on into a do-or-die situation,” says the man who studied in Arabic school and polished his English language skills reading the newspaper.

With the challenges came huge accomplishments, like his signature line, Wahaj, which, after 20 years is still sought after “by royal families, ministers, and even 16-year-olds,” he says. “But the biggest of my big achievements was to be commissioned to make the bespoke fragrance for the top royal wedding in Bahrain.”

Shoaib has also created a designer scent for none other than football legends Pelé and Maradona. “At an airport lounge, I managed to request Pelé to allow me to gift him a one-of-a-kind piece. Two days later, I presented it to him in Bahrain. Getting appreciation and a grateful hug from him was unforgettable.”

He attributes his milestones to honest work, passion, guts, and creativity. “I have always gone against the tide. When I set up my first shop in Gufool, I was laughed at, for wanting to compete with the big names. But for over a decade, we have been among the top brands in Bahrain. I have made my mark, by the grace of God and my parents’ blessings. One day, Dar Al Teeb will be a charitable entity, giving back to the community.”

When not in his lab, mixing exotic oils and essences, the self-confessed shopaholic sings at his studio, and has also dabbled in photography, for which he has won awards, including at the United Nations.