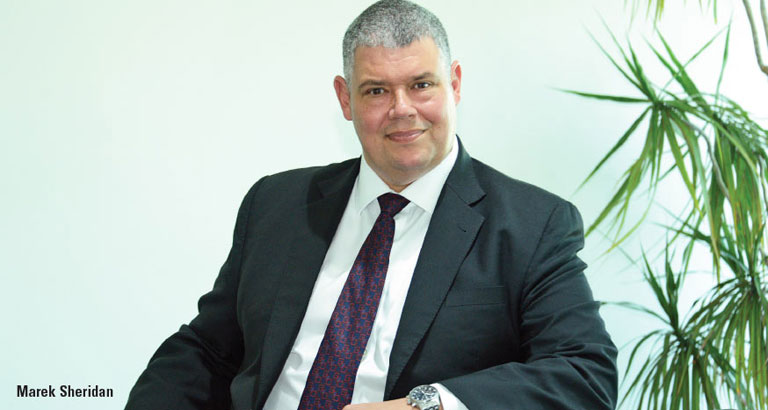 Marek Sheridan, new CEO at BMMI, tells Liz O’Reilly about his journey and what’s in store for the future.

Having been in the Gulf since 1992, Marek Joined BMMI in April last year taking over from long-term boss Gordon Boyle in a well-thought-out succession plan.

A native of London, he came to Jeddah at the age of 24 to work in marketing. While there, he met his wife Donna and set up an advertising agency before joining Coca Cola and moving to Riyadh and then Abu Dhabi.

In 2002 he went, as head of marketing, to MMI in Dubai, a brand which has historical links with BMMI. Over a 14 year career there he was appointed CEO of the group’s Oman operations, oversaw various acquisitions and functions within the broader MMI/ELR Group and ended up as Chief Operating Officer with responsibility for areas such as retail, marketing, HR and legal.

Of coming to BMMI and Bahrain, he says: “It was a big decision to make the change. I loved the job and I was in a good position, but the opportunity to take the top position for such a reputed organisation as BMMI was just too good to ignore.

“I’ve known Gordon [Boyle] for some time because there are a number of areas of overlap between the businesses. It was his intention, and that of the Board, to make sure there was smooth transition and therefore for the first 8 months I shadowed Gordon until January this year when I took over as CEO.”

He adds that taking on the lead role means not getting bogged down in minutiae, saying: “You have to balance your time between giving your support to management to help them through the current challenges with preparing the team and the organisation to capture the opportunities of tomorrow -keeping an eye on that balance is really important.

Strong communication is essential, being clear about objectives and making sure all stakeholders are aligned is a critical part of the leadership role – then ensuring that the team have the capabilities and competencies and support where necessary to achieve those objectives is all part of the mix.”

Perhaps the company’s most visible brand in Bahrain is the Alosra supermarket chain, which has seven branches on the island and has just opened a second store in Saudi Arabia. Marek says: We’re looking to identify further growth opportunities and we’ll also be coming up with an evolution for the Alosra brand which will be revealed in the near future – we will continue to focus on what Alosra does well, bringing customers things they want, creating great experiences, with our team going that extra mile, bringing in specialist bakers, butchers, farmers etc to ensure that our customers can enjoy products made, grown or farmed with the same passion for excellence that we all like to enjoy. We also have a great “think local” initiative – where we actively support Bahrainis both within our Group but also across our supply chain. “We are not just about stacking groceries on shelves………we constantly look at areas where we can deliver delight and value to your customers whether it be organic nut butters made instore, fresh pressed vegetable and juice drinks made to order or artisan breads made to our own recipes and freshly baked everyday –

The company also has cafés and restaurant: Delilah’s, Café Amsterdam, La Vinoteca Barcelona and the recently opened Alto at Downtown Rotana – a property which BMMI is a significant shareholder in. With a rich history in logistics and supply chain management, as well as representing global brands such as Mars, Colgate, RedBull and many more BMMI also has substantial overseas operations in parts of Africa and the Middle East.

Of the future, Marek concludes: “We have to bring sustainable, profitable growth to our shareholders and we will do this by trying to win the hearts and minds of our customers by driving excellence in whatever we do, wherever we do it.”