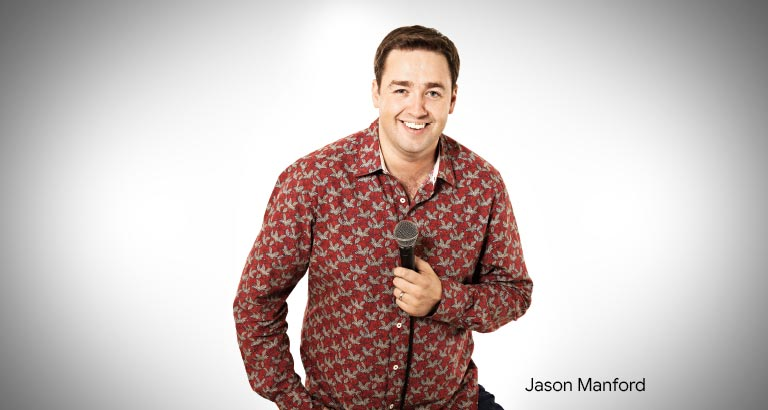 "Stand up is my ‘main’ job but I love singing and acting and I know that’s something I’d like to keep doing for a long time too.”

Hotshot UK comedian Jason Manford forsakes his usual arena shows for an intimate gig at the British Club this month. BTM shot the funny man some questions ahead of his appearance.

How did you first get interested in comedy?
I remember having lots of comedy in the house either on telly or the radio. My dad is a real comedy fan and would watch Dave Allen and Les Dawson and Tommy Cooper. Then when it was Comic Relief night and I remember being about 10 or 11 and being allowed to stay up late and watch all this adult comedy. I just loved it. It was so naughty!

You had some big-name early influences, including Peter Kay, Eddie Izzard, Johnny Vegas. Who, these days, do you like to watch?
I like most of the people everybody likes, Kevin Bridges, Sarah Millican, Sara Pascoe, James Acaster, John Bishop, David O’Doherty. But I also love discovering new and funny people. On the Muddle Class tour, I’ve had so many brilliant comics come and support me, like Dane Baptiste, Tez Ilyas and Laura Lexx, there’s just too many to mention!

Who would be your comedy hero and why?
I think Peter Kay is still my comedy hero. He’s a good friend of mine now but getting to know him has only made my admiration for what he does rise. He’s simply a genius and probably the last person the UK produced with genuine funny bones.

Your career has been very varied, ranging from stand-up to TV and stage acting. What are you most proud of?
I’m proud of all of it! Stand up is my ‘main’ job but I love singing and acting and I know that’s something I’d like to keep doing for a long time too. I feel very lucky to be able to try lots of different things that I’m good at. So far, it’s going well.

What made you decide to go back on the road with the Muddle Class tour?
I like to tour fairly often, but I’d had this really strong idea for a tour show. I had already written some funny stuff and thought, ‘why not take it out on the road?’ It’s probably been my best tour to date so that’s exciting that after 20 years, I’m still writing stuff that makes people laugh!

And what’s it all about?
It’s about loads of things. About the gap between the person we are and the person we want to be. It’s about how our brain makes us feel like we’re struggling alone sometimes; but actually, the very fact so many other people in the audience are laughing at the same things, shows you that you’re not alone and it’s okay not to be okay.

Have you played the Middle East before, prior to this tour, and will you be adapting any of your material?
I’ve played The Laughter Factory, many, many times over 20 years in show business and it’s always great fun. I don’t adapt anything in a negative way, playing different places with differing people simply gives you more things to talk about and laugh at.

Will you get a chance to stick around and see anything of the region/Bahrain?
I do hope so. The last time I played Bahrain was over 18 years ago, I actually missed my university graduation for the gig, so it’ll be fun to return after all this time.

What’s next for you? You’re interested in musical theatre, could we be getting a glimpse of Musical Manford either on this trip or in the near future?
Ha, you never know! Let’s get this comedy gig out the way first though shall we?