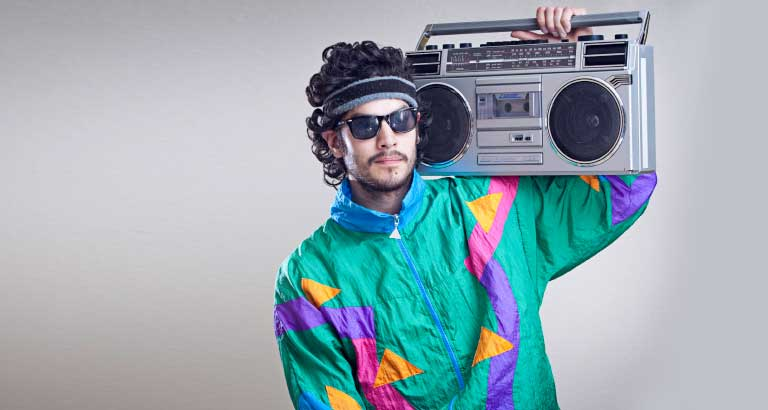 Regular readers will notice that our music page looks a little different this month! We’re taking a short break from bringing you the latest and greatest albums to take you all the way back to 1997 and the era of thick gold jewellery, white denim, Union Jack sunglasses and flared jeans. That’s right, since Bahrain This Month is celebrating its 25th anniversary, why not look back to see what was popular in the charts when our first issue rolled hot off the press?

When we get older and celebrate milestone birthdays, one of the most common questions is: “What was #1 in the charts when you were born?”
For Bahrain This Month, the answer is equal parts momentous and tragic. On August 31, 1997, Princess Diana passed away in a car accident in Paris causing an immense outpouring of grief and affection worldwide. In tribute, Elton John released what would quickly become the UK’s best-selling single of all time – the double A-side of ‘Something About the Way You Look Tonight/Candle in the Wind 97.’

‘Candle in the Wind’ was originally written and released by Elton as a tribute to Marilyn Monroe in 1974, and the star – with his longtime lyricist Bernie Taupin – recorded an updated version to be played at Diana’s funeral, which was released as a single the following week.

Demand for the track was higher than could possibly have been anticipated. As well as the UK chart, it topped the Billboard Hot 100 for 14 weeks and is the second biggest-selling single in history worldwide, with a grand total of 33 million copies sold. According to Guinness World Records, only Bing Crosby’s ‘White Christmas’ from 1942 has sold more.

On the polar opposite end of the pop spectrum, the second best-seller of 1997 went to ‘Barbie Girl’. The ridiculously catchy song by Danish-Norwegian dance-pop group Aqua quickly became a global phenomenon and remains a disco classic and has more than one billion hits on YouTube.

In third is ‘I’ll Be Missing You’ by US rapper Puff Daddy and singer Faith Evans. Released in memory of rapper Notorious B.I.G, who had been murdered four months prior, the track, which sampled The Police’s 1983 single ‘Every Breath You Take’, logged a total of six weeks at the summit, making it the UK’s best-selling song of summer 1997.

Continuing the eclectic run of huge hits in 1997, placing fourth is a cover of Loud Reed’s ‘Perfect Day’, recorded by a world-class lineup of performers including David Bowie, Gabrielle, Tom Jones and Elton John for an advert promoting the BBC’s diverse music coverage.

Curiously, rounding off the top five was children’s TV favourites Teletubbies with their chart-topping debut ‘Teletubbies Say Eh-Oh!’, while further down, Will Smith’s theme to the hit film Men in Black, ‘Don’t Speak’ by ska-pop band No Doubt, and ‘Torn’ by Australian star Natalie Imbruglia all rank within the Top 10. 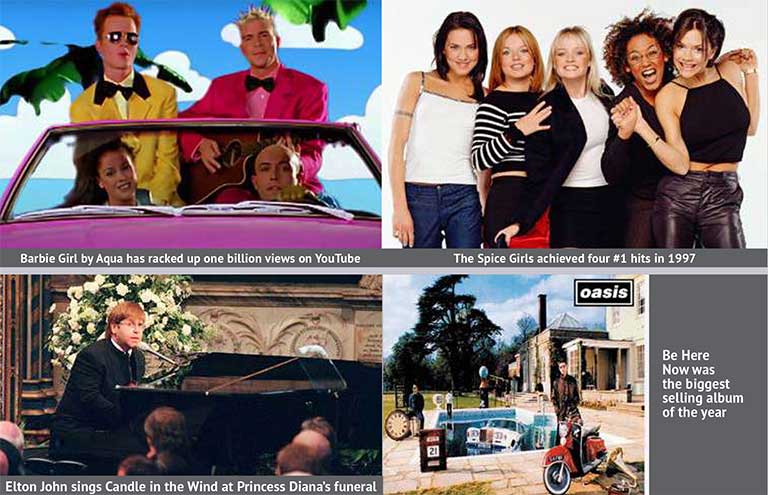 You can’t mention the Nineties without speaking about certain icons, and 1997 was another huge year for Spice Girls, landing no less than four Number One hits: ‘Spice Up Your Life’, ‘Mama/Who Do You Think You Are’, ‘2 Become 1’ and Christmas chart-topper ‘Too Much’.

Britpop legends Blur and Oasis also went head-to-head yet again as both had huge releases with the former releasing their self-titled album containing classics such as Song 2 and Beetlebum, while Oasis’ Be Here Now became the fastest-selling and biggest UK album of the year.

1997 was a momentous year for albums too. Foo Fighters catapulted into the mainstream with The Colour and the Shape, still a pillar of guitar-led rock, The Notorious B.I.G.’s Life After Death ruled the hip-hop world even though the album was released posthumously, and Radiohead released what many critics to be the best album of 1997, if not the Nineties as a whole, with OK Computer.