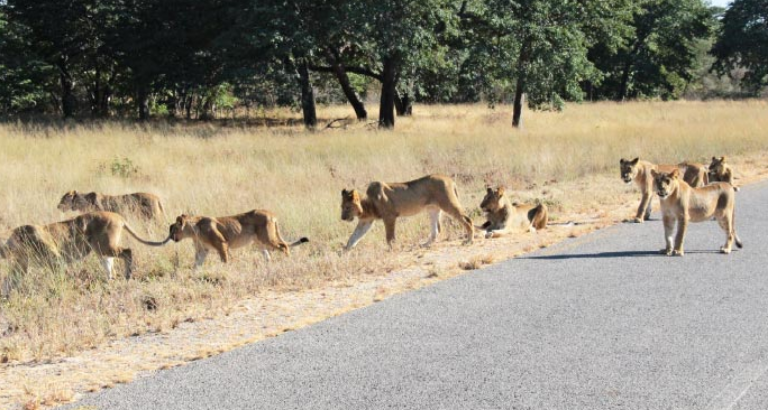 Shoba Subrahmanyam shares her experience of accompanying a party of 17 personalities, from Canada, India, the UK, Australia and Dubai, on a memorable trip to Zimbabwe, Botswana and Zambia.

The welcome at the airport at Victoria Falls, Zimbabwe, was perfect – greeted by the unique singing timbre and dancing of the local musicians. The Kingdom Hotel, with its artful African architecture, would be our base camp for the next 12 days.

We started with a meet and greet dinner that evening, where some familiar faces from earlier trips met the new. As the evening progressed, with a couple of milestone birthdays celebrated, there was a sense of eager anticipation to spot the ‘big five’, enjoy the culture and make memories that ignited the spirit of camaraderie and family. Each was given a T-shirt with ZimBotZam [her name for the tour] highlighted on its front. The dinner was awesome, the service and friendly atmosphere near contagious.

The next morning, after being surprised by some alligators and wild boar just outside our window, we took our first bus ride, to Hwange Safari lodge, with its own huge waterhole that attracted many species of wildlife. That evening we took the first of the many game drives, where we got to sight several animals, but the highlight was the large herd of elephants that came to drink from the waterhole. As we stood and took in this sight, another herd approached from the opposite side. Caught in between, we stood still, wary of their temperament, till they passed us and reached the waterhole. A very tense yet exhilarating moment to be remembered.

The next morning another safari in the biting cold also turned out to be a wow moment. We saw a pride of 16 lions crossing our road, flanked by two majestic males. It seemed surreal as sighting even one is a rarity.

Cameras clicked while videos rolled and the kings of the forest moved on into the bush, the big male guarding the rear regarding us with majestic disdain! Our lunch tasted better after such an appetising encounter. We had another evening safari to see more of the deer, impalas, kudus, giraffes and mainly to catch a glimpse of the more nocturnal residents.

The following day on the way back to Vic Falls we stopped at a ‘painted dog’ conservatory to see this rare breed of wild dogs that possess unique hunting and feeding skills that help them survive and coexist, even among the stronger, wilder animals.

We then went on to take an exclusive cruise on the Zambezi River, catching sight of hippos and other wildlife on its banks. The sunset was amazing, spilling its orange hues onto the water, with the darkening stillness and silence of dusk adding to the mystery of the exotic moment. We sat around a long table, and were treated to a delightful three-course dinner served with five-star fanfare! We even got to celebrate a couple’s 50th wedding anniversary, an emotional finale to another perfect day.

The next day was our ‘wonder day’ as we were guided through the lush rain forest of the Victoria Falls, one of the seven natural wonders of the world. It was a long trek with tracks leading to different falls, each splendid and majestic on its own yet all part of that one big “smoke that thunders”. We were soaked from the constant spray in spite of the raincoats, which added more to the colour than protection. We followed this with a helicopter ride to get an aerial perspective of the falls, which was breathtaking. And ended the day with ‘high tea’ at the famed Victoria Falls Hotel, built by the British on the edge of the falls.

The next day, we were special invitees to the wedding of Isabella, our local tour operator, who had programmed our trip around her wedding day. We got to experience a unique Zimbabwean wedding, a day filled with the solemnity of the ceremony, the introduction to authentic local cuisine and jaw dropping entertainment, all wrapped in true Zimbabwean hospitality.

After resting from all the excitement, we crossed over to the Chobe Marina Lodge in Botswana, where every cottage combined the rustic rugged décor with state-of-the-art amenities, and also offered a view of the Chobe River with occasional wild boar grazing on the lawn. Later that evening, we set out for a ‘sundowner cruise’ down the river and spotted a variety of bird species, elephants swimming across while buffalo and hippos lined the water’s edge. The barbecue that night was awesome spiced with variety and tradition!

The next day we had two game drives through the Chobe National Park and got an up close and personal sight of more elephants, giraffes and a large congress of baboons. We even got to see the jackals, foxes and wildebeest. The highlight was watching two stately lions moving in on a lioness that both were trying to woo!
If that wasn’t enough, we saw the elusive, shy leopard on a tree with its unfortunate prey. The exciting day ended with lots of laughter and a sing-song around a piano where spirits soared and inhibitions dropped.
The next day we drove back to Vic Falls to take in another exotic dinner with a cultural dance show.

Then to Zambia for our last leg of ZimBotZam! We visited a local village to understand their culture, and came away inspired by their cleanliness, system and values. We spent the afternoon at the David Livingstone Museum, drawn into an earlier period of time where the dedication and vision of one person impacted an entire country.

We drove back to Zimbabwe for the final unforgettable night at the Boma dinner and drum extravaganza, that offered a fusion of mouthwatering local cuisine, spirited dance performances and interactive drumming. We all got to play along on our own drums called Djembe or Ngoma! The atmosphere was truly all Africa, a perfect way to say goodbye, “Ligale Khule”.

We left with memories of the wild, the experience of a wedding, the magnificence of the falls and the distinctive roll of the drums – everyone leaving, their hearts beating to the rhythm of Africa.