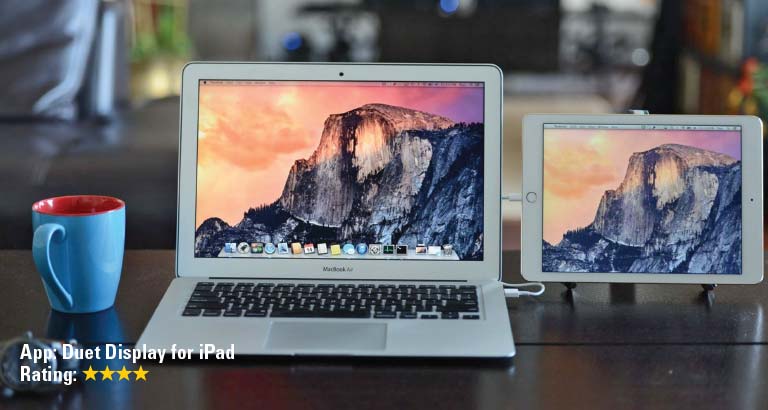 App: Duet Display for iPad
Verdict: A simple way to add a second screen to your laptop.​​​​​​​

What is it?
Duet Display uses the Apple iPad or iPhone you’re already carrying as an additional screen for your laptop on the road. Desk dwellers know the joys of using dual displays, especially while monitoring social media feeds, stock tickers, or any sort of status indicators. This iPad app works well in a pinch, or even full time if your laptop is beefy enough.

The Good
It automatically adds touch functionality to the second screen, something which is unavailable on a normal laptop screen. It is also compatible with both Windows and Mac laptops, while the second screen processes and loads almost instantly with no lag.

The Bad
The screen resolution is too low on an iPhone. It’s usable, but it’s distracting enough to be off-putting. Duet Display also doesn’t work with the original iPad model, which is annoying for those still using them.

The Pear Personal Coach app is among the best fitness apps you’ll find for Android and iOS. The app has a wealth of workout routines: everything from outdoor runs to at-home resistance training, and each has an audio track of a real coach who talks you through the motions. You can pipe in your own music, too, which dials down automatically whenever the coach is speaking. The app works best when you wear a heart rate monitor, though it’s not required. There’s even a calibration workout, a run that finds your lactic threshold and customises your heart rate training in all the workouts based on your personalised number.

Todoist is both a mobile app and a web app with a browser plug-in that allows you to keep your to-dos in sync across multiple devices. It has a clean and simple interface that is easy to grasp and organise accordingly. There is an array of task-management features that means you should never miss an appointment. It also works offline based on your most recent schedule.