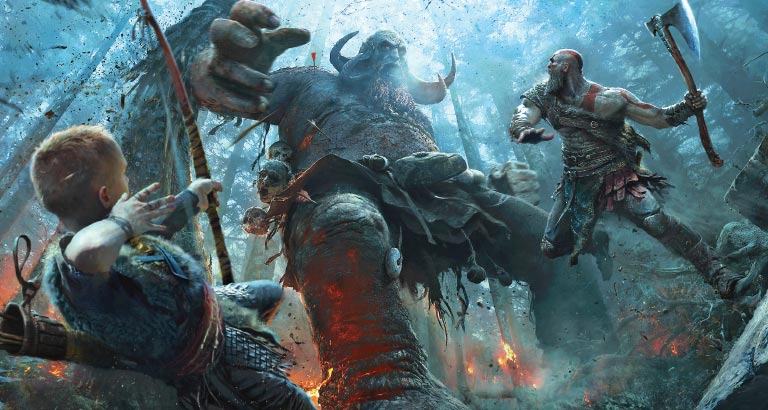 Verdict: One of the best games ever.
Rating: 5/5 Stars

God of War is a sequel and reimagining of the iconic PlayStation franchise. His vengeance against the Gods of Olympus years behind him, Kratos now lives as a man in the realm of Norse Gods and monsters. Together with his son Atreus, the pair will venture into the brutal Norse wilds and fight to fulfil a deeply personal quest.

This startling reimagining of God of War deconstructs the core elements that defined the series – satisfying combat, breathtaking scale and a powerful narrative – and fuses them anew. With an over-the-shoulder free camera that brings the player closer to the action than ever before, battles are more thrilling than ever. The new Leviathan Axe is one of the video game’s greatest weapons, allowing for a variety of attacks, while new abilities retain the defining spirit of the franchise while presenting a vision of violent conflict that forges new ground in the genre.

God of War’s single-camera shot style – that, unless you die, never cuts once from title screen to ending credits – is a subtle effect that doesn’t strike at first. But when you explore and fight your way through the story, it serves to highlight the power of some of the larger-scale monsters. It’s easy to sigh at the beauty of the game; the texture of grassy hills in the distance feels real, the sky is photo-realistic, light dances dazzlingly off shinier surfaces, and every gnarled monster conveys a sense of decay.

Sea of Thieves
The freedom of the pirate life awaits in Sea of Thieves, a shared-world adventure game filled with unknown dangers and loot for the taking. Be the pirates you want to be and share adventures with friends in a world where every sail on the horizon is another crew of players with unknown intent.

Based on the iconic film franchise, Jurassic World Evolution expands on the official mythology and puts players in charge of cinema’s greatest tourist destination. Create and manage your own Jurassic World, as the game places you in control of operations on the legendary island of Isla Nublar and the surrounding islands of the Muertes Archipelago. Every choice leads to a different path and spectacular challenges arise when “life, uh, finds a way”.

As a trainee of the elite Horzine Security Forces, you’ve been implanted into a neuro-active simulation where you fight hordes of sci-fi monsters with bullets and blades. Killing Floor: Incursion offers intense and unmatched cooperative VR shooter combat in a compelling universe.