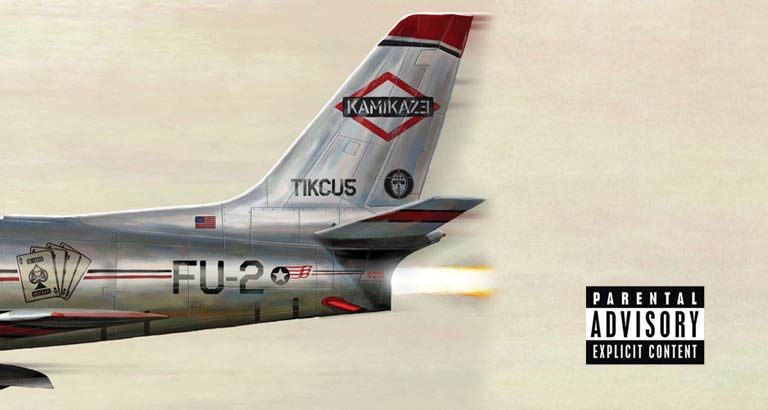 What’s the story?
Kamikaze is the 10th studio album by American rapper Eminem. Previously unannounced, the album was released overnight and features guest appearances from Joyner Lucas, Royce da 5’9”, Jessie Reyez, and uncredited vocals by Justin Vernon. Eminem, credited as Slim Shady, and Dr Dre served as executive producers, while production for individual tracks comes from a variety of musicians. The album has generated some controversy for use of homophobic slurs and diss tracks; but, despite this, Eminem has become the artist with the most chart-topping albums in the United Kingdom.

Worth a listen?
Eminem finds comfort in the past, relying on familiar themes while he celebrates the days that are gone. Coming after Revival, the 2017 album where he grappled with questions of mortality along with the moral rot of the Trump era, the retreat to spitting insults and reflexive anger is a bit of a disappointment, particularly because Kamikaze isn’t quite the jolt it was intended to be. Kamikaze often feels like an extended exercise in Eminem hitting his marks. As sheer performance, Eminem’s vocals remain a thing of wonder, which is why it’s so dispiriting to hear him circling the drain, relying on old tricks instead of expanding his worldview. He has the musical skills to mature; he’s just refusing to let himself act his age.

Paul Simon – In the Blue Light

Working with a diverse set of collaborators, including Bill Frisell, Wynton Marsalis and Bryce Dessner of the National, Simon winds up with an elastic, elegant album that plays with jazz and chamber music as much as it does folk and worldbeat. Everything on In the Blue Light is deliberate, gentle and subtle, placing as much emphasis on the words and melody as the instrumentation.

Spiritualised – And Nothing Hurt

The album is instantly recognisable for its trademark Spiritualised meld of garage rock, pillowy psychedelia, gospel, R&B, and blues via guitars, strings, horns, keyboards, and a stellar backing chorus in intimate, vulnerable, confessional songs. In full, And Nothing Hurt stands alongside the very best outings on the Spiritualised shelf. Its finest moments are consequently its most tender, revealing how much the band’s writing has progressed.

At once stark and suffocating, the album boasts some of the most unhinged sounds and textures the band have ever produced, whether it’s the klaxon-like tones or writhing arpeggios and whip-cracking beats. This Behavior’s themes are just as archetypal as its music, capturing the disconnection, disorientation, and alienation that define the duo’s work so well that it’s almost comforting instead of unsettling. The album’s moods and sounds flow so seamlessly that it feels like it could be a mix or a DJ set, even when the bottom falls out and provides a glimpse into the void on the finale.