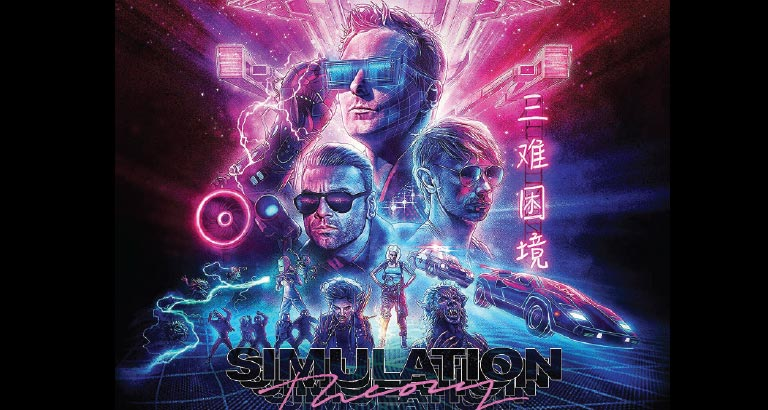 What’s the story?
Simulation Theory is the eighth studio album by English rock band Muse. Following the darker themes of Muse’s prior albums, Simulation Theory incorporates lighter influences from science fiction and 1980s’ pop culture, with extensive use of synthesisers. The contemporary political climate of the United States informed the lyrics. Rather than working on the album as a whole, Muse focused on recording a single track at a time. The album cover, designed by Stranger Things artist Kyle Lambert, and its music videos homage 1980s’ pop culture entertainment such as Back to the Future, Michael Jackson’s Thriller and Teen Wolf.

Worth a listen?
The least complicated or overly conceptual offering (for Muse) in over a decade, the 11-song set is focused and cohesive, blaring down a neon-washed highway of pulsing synths and driving beats, while swerving to avoid the orchestral and dubstep meandering of their preceding 2010’s output. Unlike these same predecessors, there’s also no filler or wasted time, making it the most compulsively listenable and immediate Muse album since 2006’s Black Holes & Revelations. Fully embracing their sci-fi tendencies, the trio dip into the nostalgic ‘80s, tapping the aesthetics of Tron, Blade Runner and composer John Carpenter. While Simulation Theory might appear to be overly polished mainstream trickery and sometimes makes you wish they’d just return to their roots as a heavy guitar band, it’s purely Muse at heart, successfully merging electronic-pop song craft with their typically urgent, stadium rock foundation.

Verdict: A decent effort from the rock titans who still stray from their roots.

Disturbed – Evolution
Coming off of the enormous success of their brooding cover of Simon & Garfunkel’s Sound of Silence, Chicago nu-metal veterans Disturbed deliver another slab of commercial grade active rock and montage-ready power balladry on their seventh studio effort, Evolution. Billed as a tribute to deceased contemporaries Chester Bennington of Linkin Park and Vinnie Paul of Pantera, the 10-track set strikes an even balance between meat-and-potatoes stadium shakers (Are You Ready, No More) and butane-draining acoustic numbers (Hold On to Your Memories, Already Gone). The band’s penchant for pairing uncompromising sonic heft with mile-high hooks remains its greatest asset, with frontman Dave Draiman’s powerhouse voice shouldering that weight with Herculean stamina.

Imagine Dragons – Origins
Nominally a rock band, Imagine Dragons are deliberately amorphous, a blob rolling along sucking up anything in its path. Often, they’re content patrolling their own backyard, relying on an EDM-inflected arena rock that consciously recalls Coldplay at both their sweetest and most urgent. The difference with Origins is, this blob sucks up a bunch of different sounds. Only shimmers with retro-synths that stir up the ghosts of new wave, West Coast stomps like early Mumford & Sons, Machine bounces to a malicious industrial throb, and Cool Out glides along to a neon-lit groove. Every one of these slight variations in sound does fit within the wheelhouse of Imagine Dragons, but that’s only because the group takes pains to be able to fit  every kind of playlist imaginable: rock, pop, electronic, soul.

Hanson – String Theory
String Theory is a clever name for an ambitious project by Hanson. Reaching their quarter-century anniversary, the trio decided to revisit highlights from their previous albums with the assistance of symphonic arranger David Campbell. Campbell assists Hanson in freshening up their catalogue, managing to give their early bubblegum hits a dose of maturity without turning them stuffy. These handsome new versions of Where’s the Love and MmmBop will be the gateway to the rest of String Theory, which serves as ample proof that Hanson built a rich catalogue of savvy, melodic pop tunes over the course of their first 25 years. Sure, the original records might be a little snappier, but hearing these 23 songs as a distinct piece of work, it becomes clear that they’ve written an enduring songbook that is open to reinterpretations.