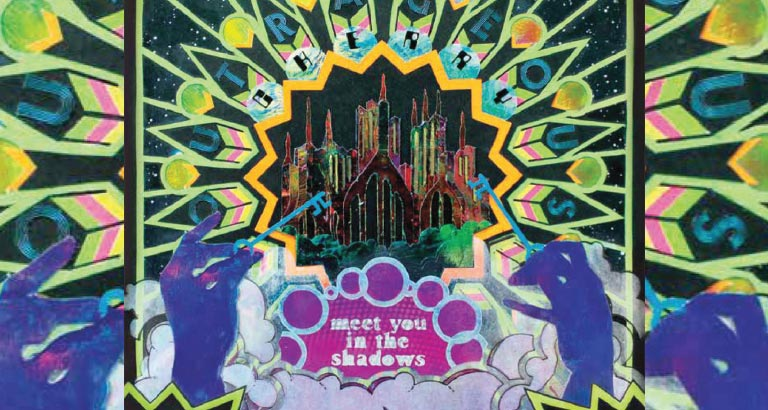 Outrageous Cherry – Meet You in the Shadows
Verdict: A tremendous album born from tragedy.

What’s the story?
Arriving just over a year after lead guitarist Larry Ray’s death from lung cancer in 2017, Meet You in the Shadows harks back to Outrageous Cherry’s early days and reflects where they are more than 20 years later.

Worth a listen?
The stripped-down production lends a ghostly feel to the album’s expertly crafted fuzz-pop, even though the stomping floor tom and snare beat that drives Meet You in the Shadows feels just as insistent as it did when it propelled the band’s debut single, Pale Frail Lovely One, a quarter-century earlier. This is a concise, consistent set of songs united around a loose theme. In Outrageous Cherry’s world, the shadows are a place to hide, but they’re also a place to connect. The album provides plenty of other reminders that Ray’s leads were just as eloquent as Matthew Smith’s voice and words, whether it’s his wild flights of fancy on Lies Feel Good or the way he closes the album by sending it into the stratosphere on Gotta Get Back Inside Your Mind. From start to finish, the album radiates the joy and warmth that always defined Outrageous Cherry’s music.

Cold War Kids – This Will All Blow Over in Time
As it gathers highlights from the five albums, This Will All Blow Over in Time traces the band’s evolution. In retrospect, it’s easy to hear how Cold War Kids channelled the passion of their beginnings into stadium-ready rock. Even their earliest songs, such as the three tracks from their 2006 debut album Robbers & Cowards that appear here (Hang Me Up to Dry, Hospital Beds and We Used to Vacation), boast the striding melodies and easy confidence that they blew up to epic proportions on Miracle Mile a few albums later. The collection gives equal time to gritty tracks, slinky grooves and soulful pop.

Gudrun Gut – Moment
On her third solo album, Gudrun Gut explores darker, more direct territory. Moment’s stark atmospheres and penetrating synths evoke the coldwave and early industrial music of the ‘80s as well as trends in late-2010s electronic music. Moment reflects Gut’s artful restraint even at its most propulsive, and the minimalist approach puts the focus on Gut’s vocals, which are more compelling than ever. Moment becomes more experimental as it unfolds, some tracks are as abstract as anything on Gut’s previous albums.

Carolyn Sampson - Abbandonata: Handel Italian Cantatas
British soprano Carolyn Sampson has long been known as a fine Handel specialist, and anticipation has awaited her recordings of the composer’s early Italian cantatas, written in Rome at the end of the 1700s. It’s everything that could be desired, and then some. The cantatas had some connection with a short-lived ban on opera in the Papal States, and plenty of muscular singers, female and male, have recorded them as little operatic scenes. Yet that is not quite what they are: they were written for aristocratic homes, not opera houses, and they were chamber music, not opera. Sampson captures this vibe perfectly.