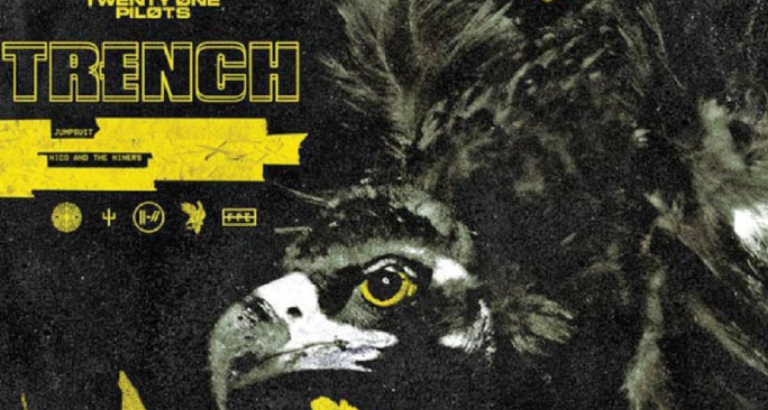 What’s the story?
Trench is the fifth studio album by American musical duo Twenty One Pilots (TOP). A concept album set in the fictional city of Dema and the surrounding valley known as ‘Trench’, it is the band’s first studio album in three years and serves as a follow-up to their fourth studio album, Blurryface (2015). Trench continues the band’s exploration of themes surrounding insecurity, faith and mental illness by framing them within the conceptual world of Trench.

Worth a listen?
Advancing the narrative started on Blurryface, the Ohio duo continue the struggle with personal demons, diving deep into the darkness of the Trench and battling fresh enemies wrought from their newfound fame and fortune. The results are less carefree or pop-friendly, and instead comprise an engrossing conceptual journey that demands full attention, especially considering the album’s underlying mythology. Dark and intense, it’s a gift to dedicated fans, a theory-packed, multi-media puzzle for those interested in delving into a rich story occupied by symbolic entities like Dema, the journal-writing Clancy, the mysterious Nico, and the nine bishops from the Blurryface days. Sonically – while their trademark cross-genre, dub-influenced sounds remain – TOP expand their reach with some fresh tricks, sprinkling surprises such as Tyler Joseph’s falsetto into the R&B-washed Morph and the funky My Blood; a horn section on Legend; and bright digital synths to second-half highlights The Hype, Cut My Lip, and Bandito.

KT Tunstall – WAX
WAX harks back to KT Tunstall’s first three albums with their catchy hooks and raw, emotional punch. Cleansing single The River sparkles with life, an empowering rallying cry, while the confessional Dark Side of Me and the smoky rocker The Healer recall her most electrifying moments. WAX is full of vigour, pulsing with a visceral charge on the strutting Little Red Thread and the infectious singalong In This Body. These effects add brightness and texture to her typically impeccable songcraft, resulting in a reinvigorated triumph for an artist who considered leaving music behind just years prior to WAX’s release.

Coheed and Cambria -  The Unheavenly Creatures
After the sinister piano and spoken word Prologue, the band’s prog side comes straight to the fore on The Dark Sentencer, complete with twin-guitar leads, an angular riff, and proto-military chanting, that moves straight into its knotty melody with eternally youthful voice soaring over the top of the band’s raging attack. Throughout The Unheavenly Creatures, Coheed and Cambria incorporate structures, approaches, riffs, hooks and progressions from their two-decade lifespan. Even the few seemingly out of place moments are deliberate diversions to reward longtime fans.

Marie Davidson – Working Class Woman
Marie Davidson’s latest album is far more outgoing than her previous releases, in addition to being more introspective. Her observations are sharper and funnier than before, and the album’s sound design is much more daring and articulate. On opening piece Your Biggest Fan, she pokes fun at herself, as well as the state of life as a performing artist. The more ethereal Day Dreaming is a much starker reflection of the loneliness of touring life. Work It is a cheeky ode to the pursuit of success, with Davidson acting as a motivational coach over a stripped-down, driving beat.