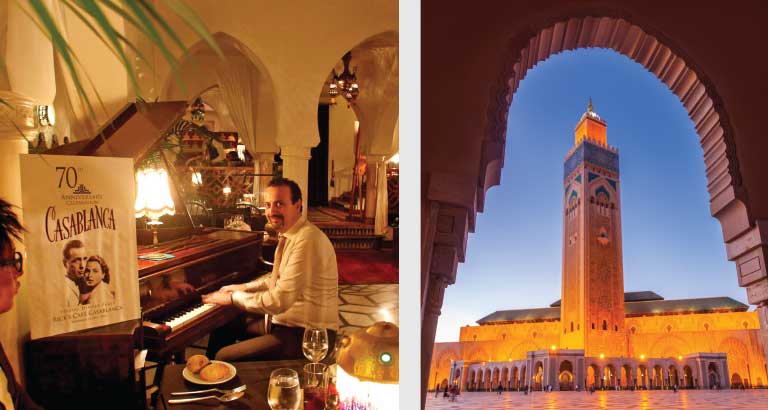 Casablanca, the very name conjures up images of Bogart and Bergman and their doomed, WWII-era love affair in the film of the same name. And with direct flights from Bahrain, you can soak up a taste of that romance for yourself.

Morocco’s largest city is often ignored in favour of the equally nostalgic Marrakech, but if you’re looking for a break that offers everything from surfing beaches to architecture and art to great food, Casablanca is the place to be.

Located in the central-western area of the country and bordering the Atlantic Ocean, Casablanca, and, in fact, all along the neighbouring coast, is well known for its surfing. Each September board riders from all over the world descend on the city for the Quicksilver Pro competition. But, if you think that might be a little energetic, don’t worry – there are plenty of beachside hotels where you can chuck a towel on a sunbed and settle in for some serious rest and relaxation in a somewhat more temperate climate than our own, surrounded by stunning architecture from Art Deco to determinedly modern.

Obviously, it would be a sin to visit Casablanca without paying your respects at Rick’s. Immortalised in the aforementioned film, Casablanca, the restaurant/piano bar opened in 2004 and was designed to recreate the bar in the movie classic. Set in an old courtyard-style mansion built against the walls of the Old Medina, it’s filled with architectural and decorative details that will have film buffs swooning. There is an authentic 1930s’ Pleyel piano and As Time Goes By is a common request to the in-house pianist. 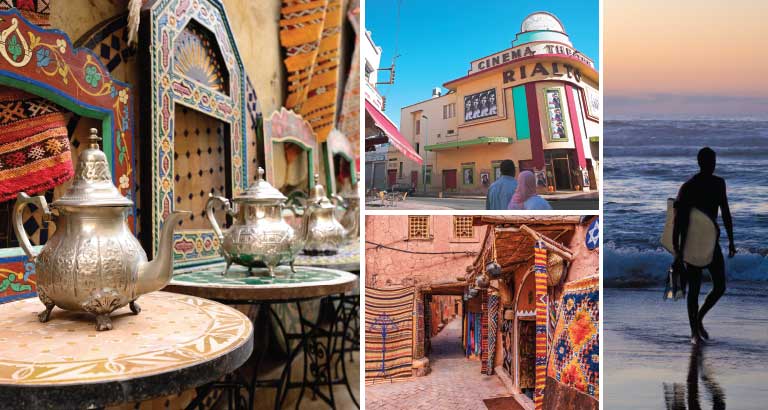 And, once you’ve had your fill of nostalgia, the city boasts some serious foodie credentials at restaurants such as Le Cabestan, which has a 90-plus-year history, Le Petite Roche, sitting on a promontory by El Hank lighthouse, and Le Rouget de l’Isle, which has just 12 tables and takes no reservations.

Pop next door from Rick’s into the Old Medina for souq-style shopping and look out for carpets and lamps, particularly. Or head to Qartier Habous, in the New Medina, for leather bags embellished with Moroccan coins and intricately designed clothes and shoes. As with any souq, be prepared to bargain! For a more upmarket experience, visit La Galerie de l’Aimance, on Boulevard Felix Houphouet Boigny, where you’ll find gorgeous pieces from local and international artists as well as jewellery, clothing and furniture.