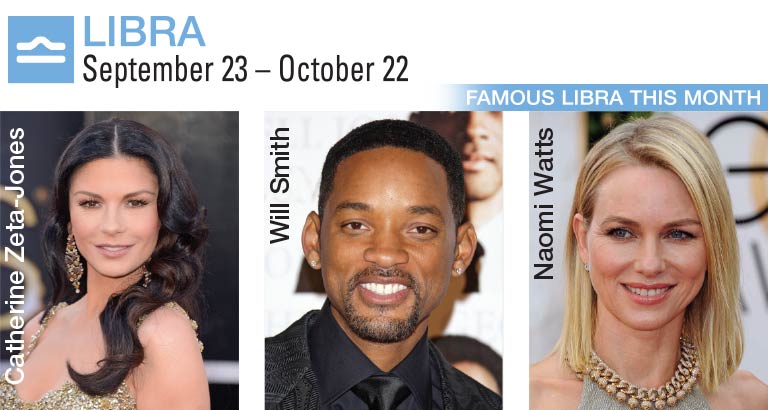 If a child has been acting differently then a moment aside is advisable since you may well discover a worrying fact that leaves you shaken. You could already have your suspicions but, without confronting the matter head-on, you’re never going to know for sure. Be patient and don’t pass judgement until you are in full possession of the facts. On the work front, a planned business venture could finally kick off thanks to the encouragement of an enthusiastic friend, but make sure the path you take is one you genuinely want.
Card of the Month —The Devil

Something has changed about your attitude to life recently and, for those closest to you, it has become a blatant and obvious transformation, whilst remaining one you refuse to accept. Regrettably, some of you have started to pursue something altogether more material – money. A gradual detachment from your emotional side has seen you invest a great deal more energy into endeavours less spiritual and some of you will suffer if you do not attempt to reinstate better values.
Card of the Month — Knight of Swords

Turbulent times lie ahead in the workplace for those of you born under this star sign, as your ambitious side comes to the fore and you attempt to battle with an opponent in a promotion war that looks set to dominate most of October. Put your best foot forward, keep a clear and objective head and all the advantages will fall in your favour. Just ensure that you are prepared for a rough ride, as your main rival for the vacant post is not the kind of character to give up easily.
Card of the Month — King of Swords

October will see all your effort, hard work and financial outlays finally come together as a long-term project is completed to your satisfaction. Capricorns are a difficult bunch to please so you should try to enjoy the fruits of your labour without looking for a flip side. If something bad is going to happen, then worrying about it will only make matters worse. A better appreciation of what’s good in your life will allow you to deal more effectively with the negative times.
Card of the Month — Nine of Swords

It’s your money. You earn it so you can do what you want with it. If only certain members of your family could get their heads around that concept. October may see you having to defend your actions in areas of finance for no real reason whatsoever. Be quick to realise that where your money is concerned, you have the final say – so get others to grasp that point! If there is trouble at home with a partner and their less than flattering remarks, then confront them rather than allow the matter to brew.
Card of the Month — Three of Wands

Romance is in the air this month as the flutter of Cupid’s wings looks set to ripple the waters and reward those of you searching for love with the opportunity to embark upon a fresh, exciting relationship. If you are in a relationship there’s no need to feel left out! The signs also bode well as you develop stronger bonds within a current partner. The only note of caution goes out to the less scrupulous among you, as you might be tempted to stray without commitment.
Card of the Month — Nine of Cups

Your sign knows the qualities required around leadership and decision-making and you will be asked to employ both of these skills in October as others turn to you for advice and direction. Whilst you may not feel completely qualified to carry out the tasks at hand, don’t doubt yourself. You are better equipped than you realise and more respected than you appreciate, so play to your strengths and you will succeed in exactly the way those around you expect you to do.
Card of the Month — Strength

Money is the main concern for you this month but it will be more a case of managing the excess rather than the opposite – a problem many people would like to have. Recognition of your talents at work will lead to an increased pay rise or bonus and this will set your finances up well for the coming months. October may well see you organising improvements within the home and a trip abroad could also be on the cards. In matters of health, you may begin to feel your old self after a possible low point last month.
Card of the Month — The Moon

This month is going to see many of you get in touch with your spiritual side and this will in turn spill into other areas of your life to generally very good effect. Sometimes clarity and introspection are the best ways to achieve the results you are after. If you have been fighting concerns at work with difficult colleagues, you will gain the advantage by careful reflection. Don’t rush into matters unprepared. Allow your opponents to show their hand first and only make your move once you have all the information at your disposal.
Card of the Month — Three of Cups

If you have been feeling that the world is against you, then this month it could all come to a head; and though others may have suggested you were being overdramatic, it may come to light that your beliefs were justified. September could be the month when a change – whatever its nature – impacts upon your life for some time to come and sets you on a completely new road. If you don’t gamble on your instincts, then you might just regret it. If you do nothing, then you can’t expect anything to change.
Card of the Month — Eight of Wands

The long-term future of a relationship hangs in the balance as loyalties are spilt within your family. The chances are that finding an answer to your dilemma will take a lot of hard work and there is little point in pursuing a solution unless you are committed to the endeavour from the offset. A loved one could surprise you on the 10th so, to avoid disappointment, don’t make any plans. It might be a welcome relief to an otherwise stressful October.
Card of the Month — King of Cups

The battle is on as you seek to stamp your authority on a project against some very stiff and competitive opposition. If doubts arise, stand strong because the opportunity for you to impress will lead to better things and even a possible promotion. If your endeavours are of a more creative nature, then there may be a chance to showcase your latest work with rewarding consequences. All of this leads to financial gains, and whilst money doesn’t buy you happiness, it certainly gives you the chance to do what you want.
Card of the Month —Page of Pentacles