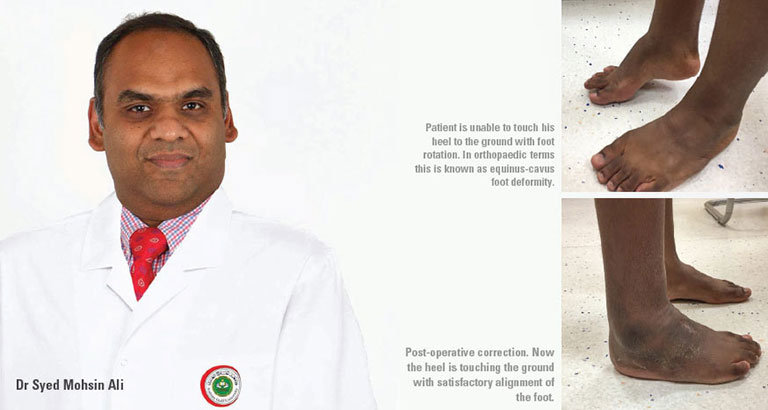 The 15-year-old boy from Sudan was born with a club foot on his right leg. The condition, known as congenital talipes equinovarus (CTEV), is a deformity involving one or both feet in which the affected foot appears to have been rotated internally at the ankle. Without treatment, people with club feet often appear to walk on their ankles or on the sides of their feet.

During his early life, the youngster underwent multiple castings and surgeries in an attempt to correct the problem. Unfortunately the treatments were not completely fruitful and gradually, as he grew, the deformity became worse and in the last few years he was experiencing difficulty in walking and taking part in sporting activities. Finding suitable footwear was also an issue.

Eventually he visited King Abdullah Medical City University Medical Centre and, after a detailed assessment and investigations, was recommended to undergo surgical correction.

Surgery was carried out and the patient went home the next day with a cast. Two weeks later, his stitches were removed and he was advised to start walking in the cast.

After four weeks he was able to walk without the cast using only a plastic splint for a further two weeks and now he can walk with a much improved gait. He can play any sport he wants and finds it easy to buy footwear.

I am very thankful to the parents and patient that they showed full confidence in our centre and, Alhamdulillah, both family and patient are very pleased with the outcome.