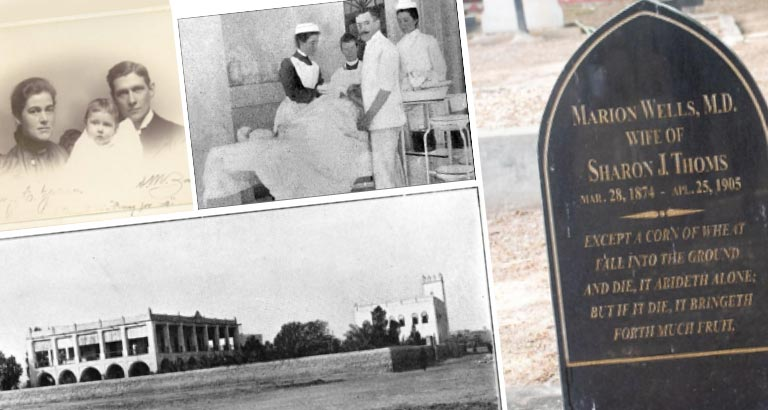 The American Mission Hospital (AMH) is known for being a stalwart in the healthcare sector in the Kingdom of Bahrain. In this picture series, we explore the initial 40 years of the hospital’s illustrious 120-year history.

When a young American, Samuel Zwemer, stepped onto the shores of Bahrain on December 7, 1892, he knew he wanted to serve the needy and to preach the gospel. However, he did not realise that the hospital he founded, and helped build, would continue to care for the community for nearly 120 years.

In the first 40 years, he inspired many doctors including Dr. Sharon J Thoms, Dr. Stanley Mylrea, Dr. Paul W Harrison, Dr. Louis P Dame and Dr. Harold Storm to leave the comforts of the USA to come and set up hospitals in Bahrain, Kuwait, and Muscat. Mr. Zwemer, along with James Cantine, the co-founder of the Arabian Mission, inspired many nurses, teachers and paramedics also to join them.

Long medical trips were made by mission workers to Saudi Arabia, Qatar, and the coasts of the trucial states - which later became the UAE - in their mission to bring healthcare to all. Government health centres and hospitals opened in the region. But, until the oil boom in the Arabian Gulf region, which arrived in the late 30s and early 40s, the local governments had largely depended on the mission hospitals for healthcare, for their people.

The American Mission Hospital in Bahrain, with major changes in strategic management and with cutting edge medical technology, continues to care for the community. The ethos that the pioneers had, of course, remains unchanged. 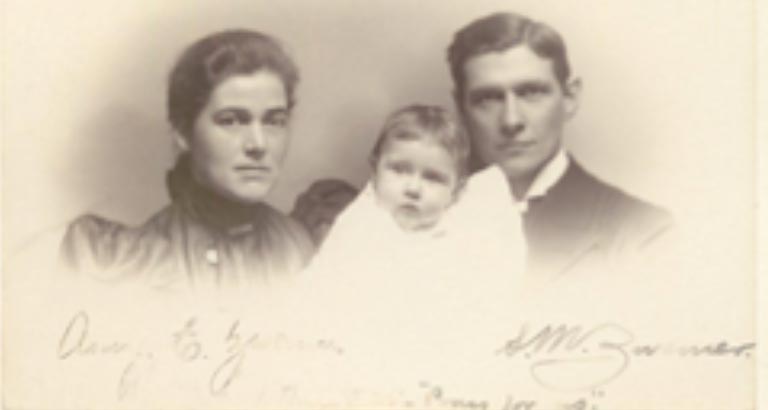 Dr. Samuel Zwemer, the founder of the hospital, with his wife Nurse Amy Wilkes, and daughter Katherina, who was born in 1897 as seen in their first family portrait. Sadly, Katherina died when was barely seven years old, during a Cholera epidemic in Bahrain in 1904. She now lies buried in the Christian cemetery on Zubara Avenue, in Gudaibiya-Hoora region, with her younger sister Ruth, who had also succumbed to the same disease. Their deaths were just a week apart.

Opened in the year 1903, Mason Memorial Hospital was built under the leadership of Bahrain’s first modern physician-couple, Dr. Sharon J Thoms and Dr. Marion Wells Thoms, medical graduates of the Michigan State University, who arrived in Bahrain in 1900. Here is a picture of the hospital and the church is from the 1920s.

Mason Memorial Hospital later became known as the American Mission Hospital, and the Church of Christ as the National Evangelical Church. The open space in front of the long wall is now the Muslim Cemetery. 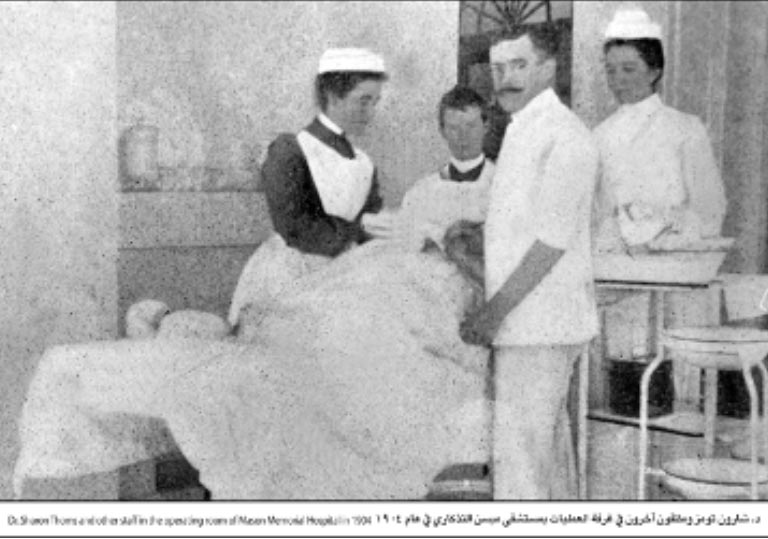 Dr. Sharon J Thoms, the first CMO, with staff in the Operating Room of the then newly-opened Mason Memorial Hospital (1904). 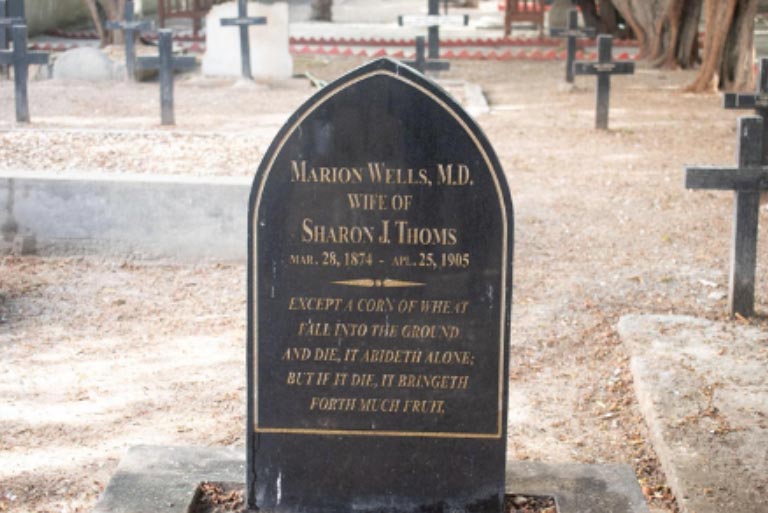 Dr. Marion Wells Thoms, wife of Dr. Sharon J Thoms, died of typhoid in 1905. She was buried at the Christian Cemetery on Zubara Avenue, in Gudaibiya 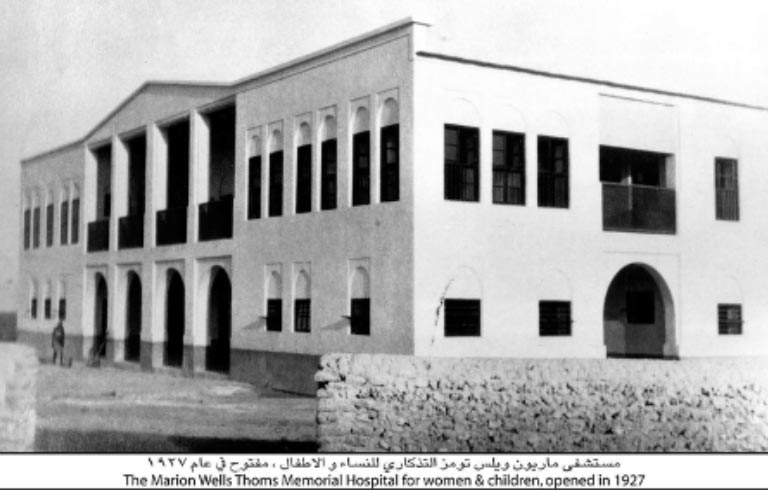 When a new hospital for women and children was opened in 1927, it was named after the first modern female physician of Bahrain, Dr. Marion Wells Thoms. 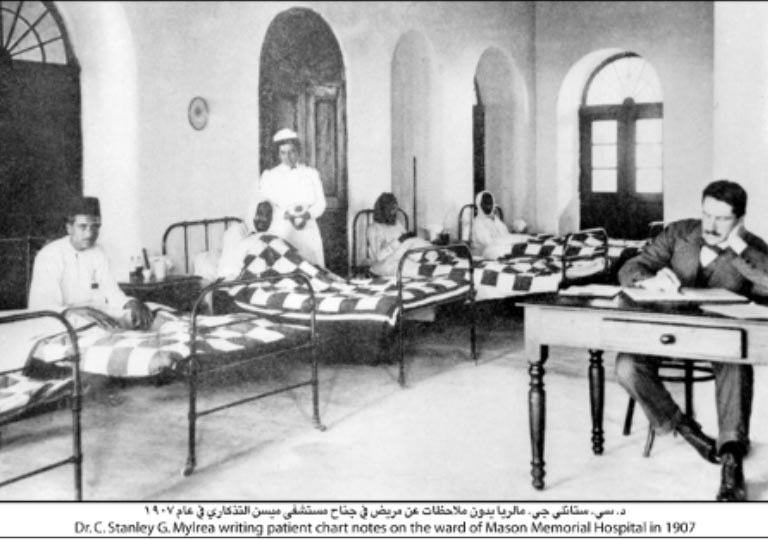 Dr. Stanley G. Mylrea, the second CMO of the hospital, in a ward of the Mason Memorial Hospital in 1907. 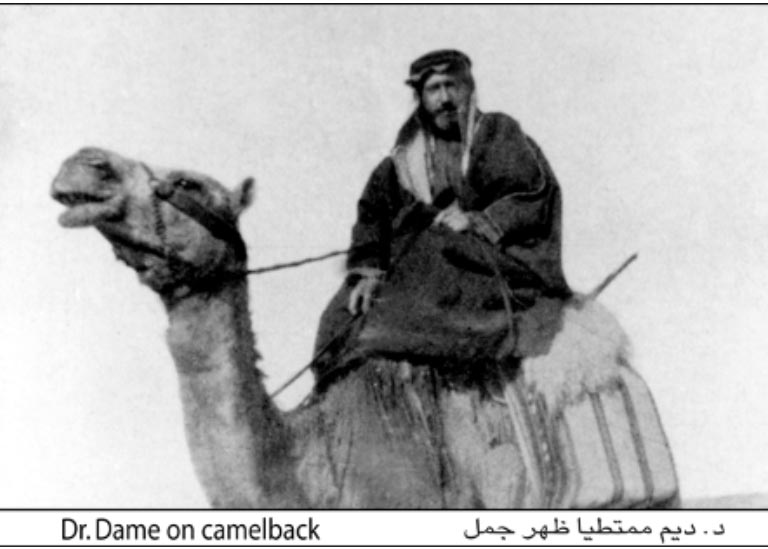 From Bahrain to Saudi Arabia. Dr. Louis P Dame, the fourth CMO of the hospital, with his medical staff, made several medical tours to Saudi Arabia on the ruler’s invitation. In 1930s and 1940s, he toured and treated people in places including Riyadh, Buraydah, Unnayza, Taif and Jeddah. 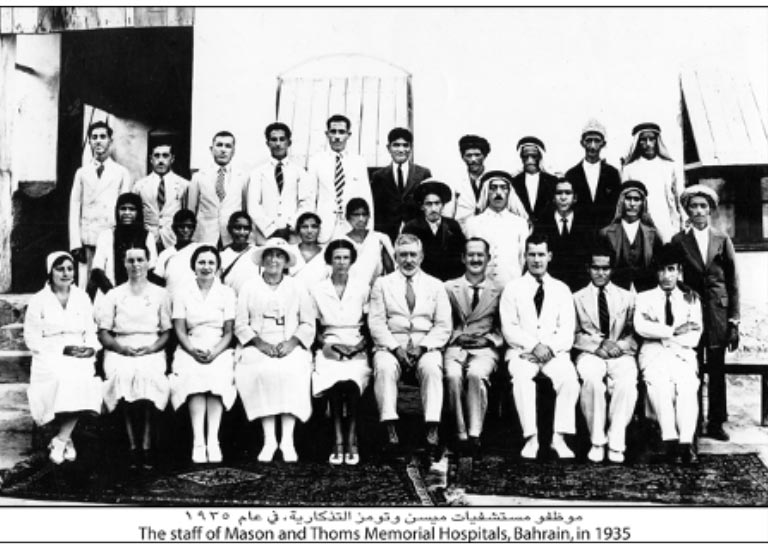 The Mason Memorial and the Marion Wells Thoms Memorial hospitals became known to the locals as the American Mission Hospital. Here is the staff of both hospitals, in 1935, with Dr. Dame. 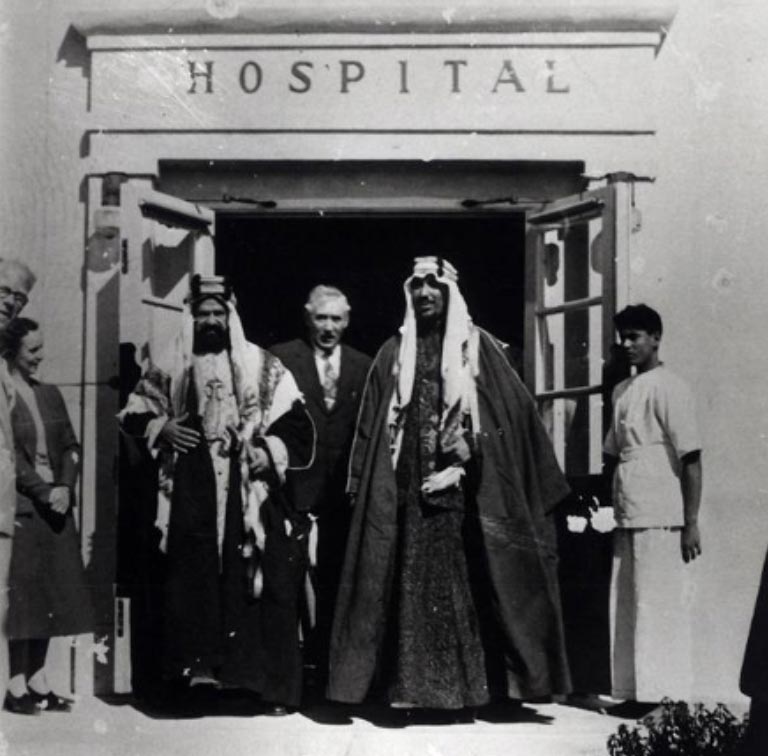