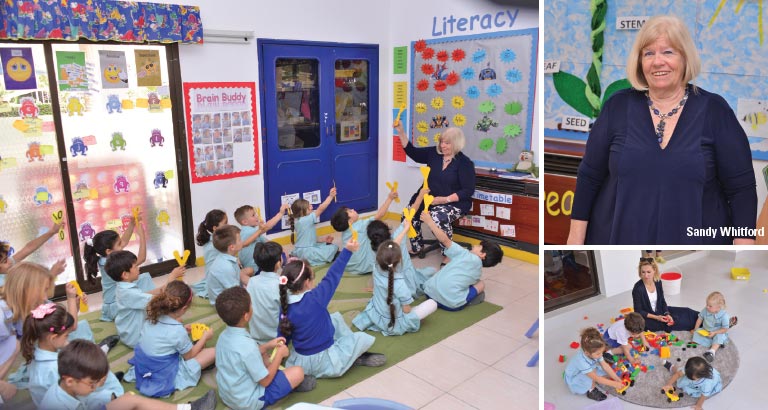 Providing a caring and stimulating atmosphere for young students for a decade, the British Preparatory School is celebrating its 10th anniversary.

With an aim to help every child reach his or her full potential, the British Preparatory School (BPS) opened in 2008, with Sandy Whitford, MBE, at its helm. What started off as a small operation in one villa with 15 children has come a long way since then, now extending to three villas, two large portacabins and 180 children. The school, which caters for children between 18 months and six years of age, is marking its 10th anniversary this year, thanks to Sandy and her dedicated team, who create an encouraging atmosphere to develop self-confidence and a love of learning.

Sandy was born and grew up in England, but due to her father’s military background, travelled around the world from a very early age. She was born to teach and reminisces about her childhood days, saying: “I used to play schools as a child and, of course, I was always the teacher. I taught my younger sister – not always to her amusement – as she said I was bossy! When at school in the UK, I taught at Sunday School. And when I travelled on the ship for three weeks to Singapore at 15, as it was during term time, I taught a class of young children.”

With years of experience teaching in Oman and Abu Dhabi, she moved to Bahrain in 1980 with her late husband, who was a pilot for Gulf Air. She joined St Christopher’s School and was head teacher there for many years, overseeing landmark developments such as taking over the Awali School from Bapco and organising visits of UK royals to the school. After the sad demise of her husband in 2003 and her retirement in 2004, Sandy took to travelling again, but the island life drew her back to the Kingdom. With the encouragement of a friend (who also became a business partner) and years of teaching experience under her belt, she opened the British Preparatory School, and the rest is history.

The school, as the name suggests, prepares children for future learning by building firm foundations, confidence and self-esteem, as well as grooming them for entry into the larger British curriculum schools. It enjoys good results with regards to ESL (English as a Second Language) programmes (for non-native speakers) and has a high percentage of students being accepted by the British School of Bahrain and St Christopher’s School, which also recommend BPS when they themselves do not have spaces available for students.

Over the years, Sandy has undertaken charitable work through the Royal Society of St George, where she raised money for local causes. She also ran teaching courses through the Ministry of Education for Bahraini teachers and, in 2014, was made a Member of the Order of the British Empire (MBE) for services to education and the British community in Bahrain.

She says much of her life has been guided by a sense of duty and encouraging British values, which have powered BPS to grow from strength to strength.