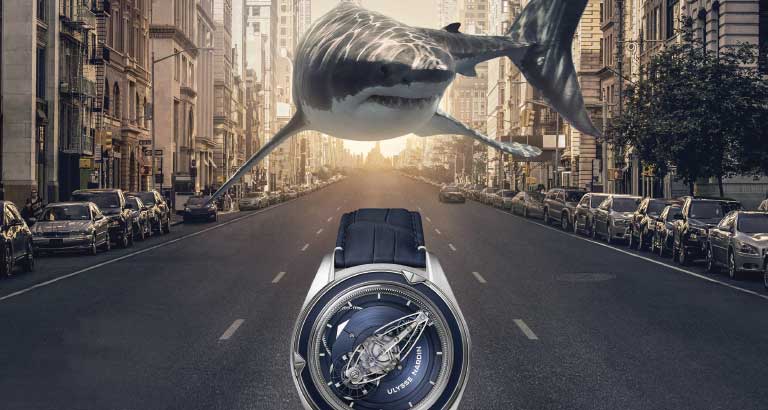 Ulysse Nardin will ‘freak you out’ with its new advertising campaign #FREAKMEOUT.

Ulysse Nardin presented its new online and off-line advertising campaign, appearing worldwide last month. With several different visuals and a film, Ulysse Nardin continues to swim against the tide as it pays homage to more than 170 years of marine heritage.

Swimming Against the Tide

Ulysse Nardin’s new publicity campaign tells the story of one shark’s odyssey through metropolitan New York and Shanghai. This shark represents an off-kilter take on the marine theme, an essential element of the brand ever since its creation in 1846.

The campaign, created by the Parisian agency Extreme, sets the ‘king of the ocean’ out of context from the world of water and into an urban universe. We see him here in the streets of New York and Shanghai, far from the deep waters and reefs that are his natural habitat. Mysterious, instinctive, dynamic and self-assured, this predator is the incarnation of action because if he stops moving, he will perish. Always in movement, he doesn’t wait for things to change; he provokes change. Powerful, distinguished and efficient, he is associated with success in the world of business and finance.

This new visual identity accompanies a global strategy in which the world of the ocean remains at the forefront of the brand’s expression. This message comes with a new twist, paying homage to the principles of freedom and innovation that have always guided the brand’s creative dynamic. Ulysse Nardin is speaking to modern explorers, to today’s Ulysses, to those who make their own rules, weigh the anchor and swim against the tide.

Freaks are those exceptional, extraordinary, fantastic, nonconformist, and occasionally paranormal free spirits. #FREAKMEOUT, or “surprise me” is the rallying cry of this campaign, last used at the 2018 SIHH (Salon International de la Haute Horlogerie). #FREAKMEOUT is a multifaceted slogan for the timepieces of today.

Ulysse Nardin is deeply invested in preserving the world’s oceans and intends to use this campaign to speak to those who are serious about sustainable development. Sharks are a vital element of the ecosystem and, as such, are crucial to the health of the planet and to our own survival. The disappearance of a species such as the shark would doubtless lead the way to the disappearance of thousands of others.

“This ‘shark in the city’ speaks directly to our aspirations with a fresh and audacious perspective. Anchored in the action, it creates an element of surprise,” says Patrick Pruniaux, CEO of Ulysse Nardin since autumn 2017.
#FREAKMEOUT clearly uses this audacity and surprise to serve the ambitions of its new captain.

Ulysse Nardin timepieces are available in Bahrain at Asia Jewellers.