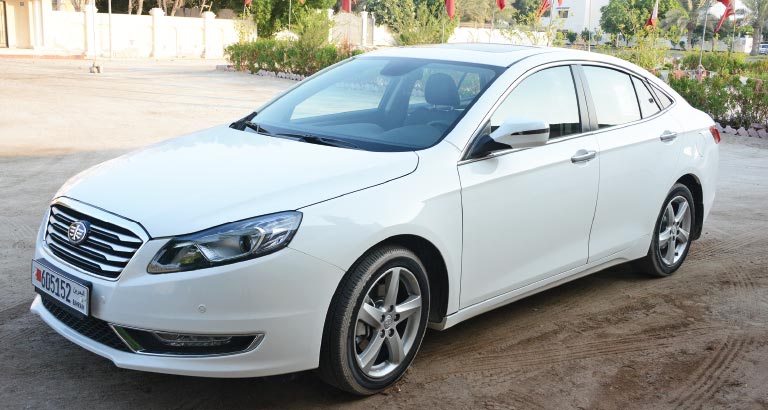 Y’know that old joke that goes, “What’s a Grecian urn? Not much.” (Geddit?!) I confess that it was with expectations of ‘not much’ in mind that I approached my introduction to the newest Chinese urn, or rather, the Besturn B70, FAW’s latest offering. To the uninitiated, FAW Group Corporation is a Chinese, state-owned manufacturing company. It is, quite impressively, one of the ‘Big Four’ Chinese automakers with cars, buses, trucks and auto parts being the main products it manufactures. It’s not a new corporation either. Its first passenger car was unveiled in China in 1958. It appears, then, that FAW have taken somewhat longer to unveil a motor here in Bahrain; the brand only arrived on the island last month. The first generation B70 was made in 2006 within a joint venture between FAW and Mazda and was based on the Mazda 6 platform. The latest 2017 design is what I was tasked to test.

Apart from supplying the Chinese local market, FAW also exports to Eastern Europe, the United States and Myanmar. Now, I recently returned from a trip to Myanmar and in that lovely country was repeatedly subject to both the visual and acoustic horrors of the ‘Chinese Buffalo’, which is the moniker the locals have bestowed upon a ubiquitous Chinese tractor which is slowly and rather unfortunately replacing the actual water buffalo there.

Expecting a similar level of engineering, or lack thereof, I arrived at Mohammed Jalal’s showroom somewhat tentatively. Was I pleasantly surprised at my first impression? Indeed I was. A sleek, white sedan was presented to me. Sliding into the driving seat brought more pleasant surprises. Overall, the ergonomic design lends an air of comfort to the Besturn B70. The car has a roomy interior, clear, well-appointed dash instrumentation layout, classy double red stitching trim on the black, leatherette seats and a smooth purr on starting the engine.

A drive to Hamala was the chosen destination; thus providing a good stretch of highway to put the Besturn B70 through its paces. Many more unexpected features were discovered on the drive. The Besturn B70 boasts cruise control, headlight-angle adjustment, dashboard instrument brightness control and electrically retracting wing mirrors. It was quite by accident that I discovered the heated seats. Pushed that button inadvertently and it proved very responsive – if perhaps a tad unnecessary at lunchtime, even in November! However, the air-conditioning proved equally responsive at rapidly cooling my heated nether regions.

The Besturn B70 has light, responsive steering and is reassuring on the brakes. It was great nipping in and out of traffic and with a six-speed auto gear box it is capable of a top speed of 196km/h.

I would also like to have had a Bluetooth connection in the entertainment system.

That said, I consider it a great alternative to similar cars in its price and size range. At BD6,220, the Besturn B70 can certainly give rivals a run for their money. It’s a quality product with good performance and a pleasing appearance in the looks department. Definitely thumbs up from me.