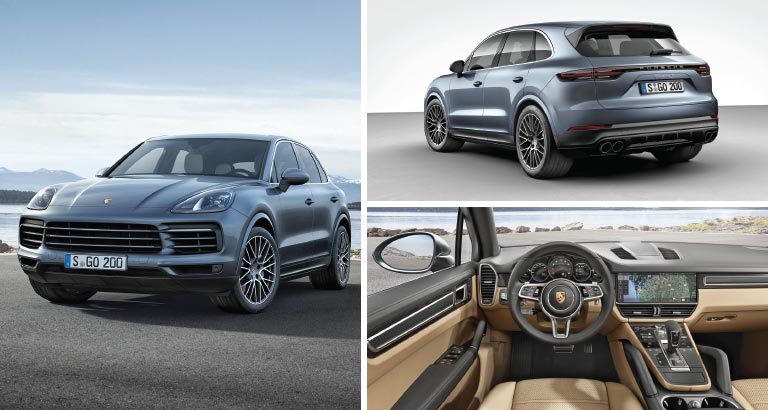 Porsche’s new Cayenne S is faster and lighter than its predecessors, as Dick Potter found out when he put the car through its paces.

Today, no one bats an eyelid when the sports car makers like Maserati or Jaguar churn out an SUV. That wasn’t quite the case 15 years ago. When Porsche first launched its SUV, Porsche aficionados were almost apoplectic at the idea. Fast forward from 2002 and they’re probably chagrined at the fuss they made, given the absolute success of the Cayenne model. To give you an idea of that success, the first two generations of the Cayenne amassed sales of 770,000. Not bad, eh?

Finally having the pleasure of getting my hands on the Cayenne third generation S, what did I decide to do for the day? Play golf, that’s what. I can explain. Driving this black beauty from the Porsche Centre Bahrain on my ‘Achilles’ heel’, the Sitra causeway, was never going to give me a feel for what this car could do. A run to Riffa Golf Club, however, would do just that.

The Cayenne S – there is also a base and turbo model – is the fastest and lightest of the generations. Quite a bit of overtime amassed by the engineering teams then, one suspects. It is longer, lower and broader than its predecessors. Other subtle, but notable changes, include wider tyres at rear than at the front and a full-width LED light bar between the rear lights. Under the bonnet, engines are down on size but up on power. Whilst I confess to holding V8s near and dear to my heart, I certainly wasn’t disappointed with the performance of the Cayenne S’s 2.9-litre 440hp twin-turbo V6 offering. Whether you choose the V6 or V8 engine, it will be paired with an eight-speed automatic transmission, which routes power through its active all-wheel drive system. Also debuting into the Cayenne are performance options such as rear-axle steering and Porsche surface coated brakes, a set of discs covered in tungsten-carbide. This not only improves break responsiveness but increases the service life of the brakes by 30 per cent. As you might expect, however, these options will hike up the costs somewhat.

Clambering inside, the cream leather-moulded seats are very similar to those in a 911 and they drop low. This helps you pretend you’re driving a racy sports car and not a large SUV, even if it is a Porsche. Rear seat passengers have plenty of room, even the tallest of them – my missus is five foot nine inches and she can attest to that. There’s an extra 100 litres of boot space versus the outgoing model. Whilst my golf clubs did fit comfortably – another reason I decided to play golf, you understand – the luggage compartment isn’t as cavernous as you might expect.

The centre dashboard is dominated by the 12.3-inch Porsche Control Management (PCM). This is the nucleus for all the car’s functions from entertainment to the innumerable configuration settings. It works in tandem with two digital displays that sit on either side of the gauge cluster so the driver can have information displayed in front. Unlike some of the optional extras, this feature is part and parcel of all three versions.

Driving the Cayenne S? It takes off with that satisfying Porsche growl, handles superbly and hits 100km in five seconds. Par for the Porsche course, the materials, quality and attention to detail of this lovely creation are almost beyond criticism. It’s not just superior to drive for an SUV. It’s superior to drive, full stop.
Visit Porsche Centre Bahrain in Sitra for a test drive.