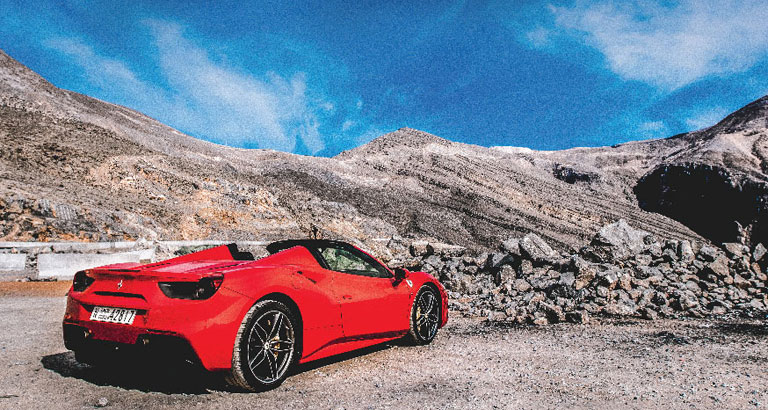 Let us suppose for a moment that, quite like the tooth fairy, there existed a Ferrari fairy, or in the Arabian Gulf, a genie even. If this mythical being grants you three wishes you could do no better than ask to test drive the Ferraris, 488 GTB, 488 Spider and GTC4 Lusso!

Hey presto! Transported to Dubai to receive my granted wishes, the 488 GTB was the first of the trio to be duly presented by my magnanimous genie. Its stunning monochrome exterior was only matched by the beautiful and luxurious interior; buttery soft, tan coloured leather seats with orange double stitch trim provided me an exquisite and surprisingly spacious cockpit for the day.

The 488 GTB’s name marks a return to the classic Ferrari model designation. The 488 ensues from its 488cc per cylinder, whilst GTB stands for Gran Turismo Berlinetta. Powered by a 3.9-litre twin turbocharged engine, it is smaller in displacement and higher in output than its predecessor’s (the 458) naturally aspirated engine.

Taking this beauty to Abu Dhabi provided me the perfect route to put it through its paces. The new
3902cc V8 turbo with 661bhp makes it the new benchmark for this kind of architecture. Ferrari’s engineers took ample time perfecting the car’s sound too, creating a new soundtrack that is as distinctive as expected from any Prancing Horse engine. It not only delivers unparalleled performance, it also makes that extreme power exploitable and controllable to an unprecedented level, even by less expert drivers such as myself. It seems the 488 GTB wasn’t named ‘Supercar of the Year’ in 2015, by Top Gear magazine for nothing! 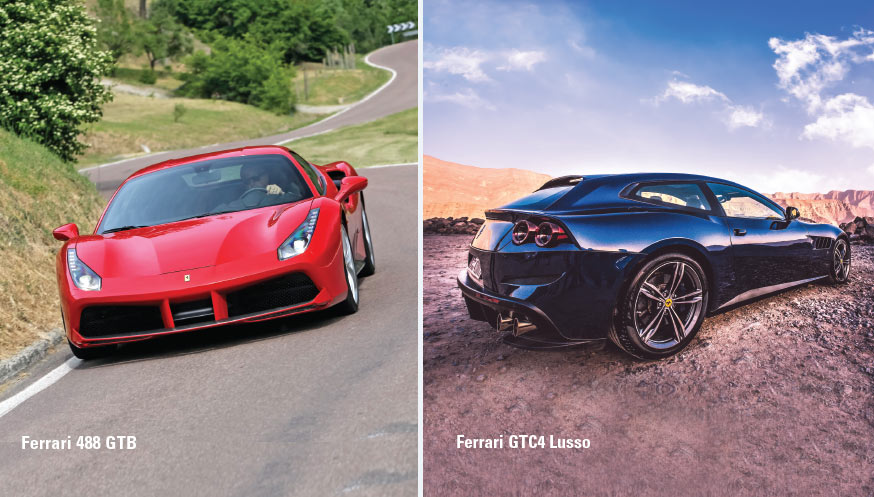 I awoke to the arrival of the 488 Spider on day two of my wish list. The impressive gunmetal grey exterior was only surpassed by an interior designed to underscore Ferrari’s Formula 1-inspired philosophy of creating a seamless relationship between driver and car. Exquisitely finished in supple, burgundy leather, this Spider is only 50kg heavier than its GTB sibling. The Spider is the latest chapter in Maranello’s ongoing history of open-top V8 sports cars and results in what the talented folk at Maranello consider to be their most powerful and innovative Spider ever. Since I really wanted to hear that V8 sing, a trip to Fujairah was deemed a fitting journey to test in full the RHT (Retractable Hard Top), around which this entire car was developed.

At the very heart of this beautiful car is, of course, the twin turbocharged V8 engine. Thanks to a maximum power output of 670cv and the smooth, progressive torque delivery in higher gears provided by the Variable Torque Management system, my Spider sprinted from 0-100kmph in three seconds flat. It goes without saying that this ‘sprinting’ is best tested far from the prying eyes of cameras of any kind! Surrounded by nature’s spectacular sand dunes with their undulating shapes and colours whilst accompanied by the inimitable Ferrari engine throaty roar, the Spider proved an exhilarating — if somewhat UAE hot-ride.

Alas, the final day of my three wishes arrived. The prospect of driving the GTC4 Lusso proved a fitting antidote to my disappointment at this extraordinary trip coming to an end. The car’s exterior came in a dark blue three-layer finish, whilst its interior was equally special, picking up the theme with its main white leather seating offset by blue leather detailing.

The new Ferrari GTC4 Lusso is Maranello’s latest interpretation of the all-wheel drive, four-seater concept, combining extraordinary performance with luxurious comfort. Its performance figures are those of a true thoroughbred sports car, with a 680bhp V12 engine giving a maximum speed of 335kmph and acceleration from 0-100kmph in just 3.4 seconds flat, the car proved incredibly versatile to drive: it was equally at home in sports car mode as it was in more GT-type contexts, such as Dubai’s city centre or on the longer journey to Umm al Quwain. Furthermore, driving on the highway allowed for the ubiquitous Ferrari lion-like roar during acceleration. This receded to a subtle yet potent cat-like purr whilst motoring through the city centre.

It was impossible to ignore the crowd-stopping allure all three cars possessed and there was no greater arena for this than Dubai’s Sheikh Zayed Highway. I was aware of the envious glances each one of my exquisite fleet garnered every day as I journeyed to and from my hotel. I must confess that this road was just a tad out of my way – but hey, you’re driving a Ferrari, why wouldn’t you opt for the long route home?

Whilst Enzo Ferrari allegedly claimed that “most things can be said in a few lines”, I would beg to differ as the sheer, heady and euphoric experience of driving these beautiful cars cannot be narrated in a few lines.

If you need further information on any of them – or if that elusive Ferrari genie fails to materialise – Euro Motors, Bahrain’s distributor for Ferrari, will be more than happy to fill you in.