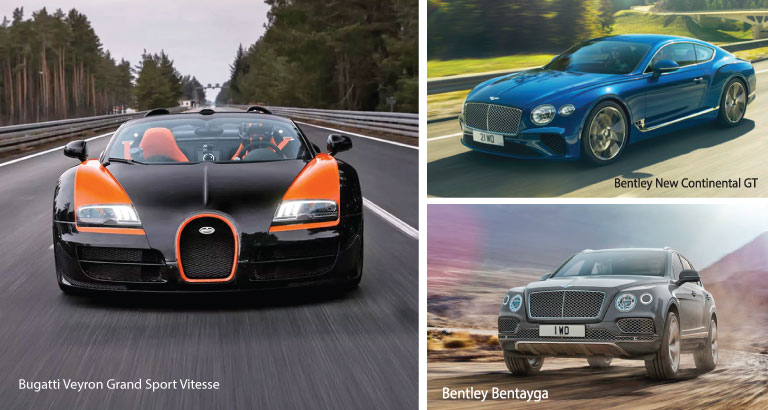 Thursday evening, June 14, may have been somewhat divisive in many households in Bahrain. Households with those intent on watching the onset of the World Cup, versus those who’d rather stick pins in their eyes.

More of a rugby fan myself, I do concede that any time Blighty is on the pitch, I shall however be glued to the box, so to speak. Now, before I get shown a red card by the Ed, this being a car article, NOT a football one, best I hastily explain myself. Given their lucrative wages, the big-league players at this year’s World Cup can afford some impressive wheels to transport them around. Three of the best players, Messi, Ronaldo and Neymar earn mega-bucks. No surprise then that Ronaldo has one of the most expensive cars in the world, with his Bugatti Veyron Grand Sport Vitesse costing in the region of USD2.4 million.

It’s fairly safe to assume there’s plenty of motoring ‘bling’ – Ferraris, Lamborghinis, Aston Martins, Porsches and the likes littering the driveways and lurking in the garages of all our World Cup heroes.  Similarly, safe to assume they might also enjoy being seen out and about in the aforementioned bling. Why not whiz down to the shops in your chrome-plated Mercedes-Benz SLR or your matte grey Ferrari F12? Why not, indeed? Well, perhaps surprisingly, it seems not all of the football heavyweights want to be gawped at by their adoring fans as they go about their chores. Instead, they want to whiz down to the shops, transport their kids, partners and maybe even the dog around with somewhat less bling on display.

Many of them, it turns out, are actually SUV fans. Indeed, I am reliably informed El-Hadji Diouf drives a Cadillac Escalade. Range Rover has, for a long time, had the top end of the SUV footballer market pretty much stitched up. Rumour has it that many of the English premier league players such as Carragher, Dafoe and Lampard have all owned one. These days, however, there’s an ever-expanding list of rivals.  Bentley is at, or not very far from, the top of that list. Whilst Bentley’s Continental GT – Wayne Rooney drives one – remains a big hit with the booted gods, it is Bentley’s Bentayga, which is their biggest scorer off the pitch.

A classily imperious-looking SUV indeed – I’d like one myself, actually, if only for the Breitling clock installed on the dashboard – the Bentayga starts at a trifling USD214,000. Well, what else are these guys going to spend their outrageous pay packets on? Fair enough, a few of them do have private jets; the alternative way to fritter your pay packet!

Wages for the modern-day footballer have never been so high. Little wonder, then, the car manufacturers are bending-like-Beckham to help take some of that cash off their hands. Bentley and Rolls Royce have admirably revamped their iconic models of yesteryear – which our talented superstars would possibly not have previously been interested in – to ensure they don’t miss out on the spending action. Surely a win-win for all? Whatever team you’re rooting for in this year’s World Cup, safe motoring.