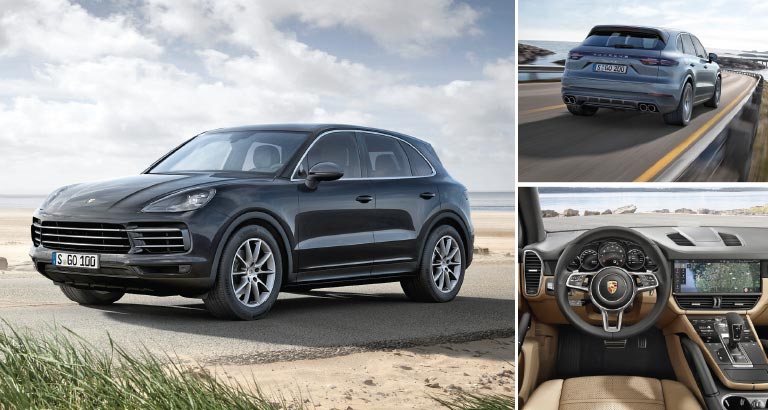 Porsche is introducing the third generation of the brand’s successful SUV. A completely new development from the Stuttgart-based sports car manufacturer, the Cayenne combines typical Porsche performance with excellent everyday practicality. Powerful turbo engines, a new eight-speed Tiptronic S gearbox and new chassis systems, alongside an innovative display and control concept with increased connectivity take both sportiness and comfort to the next level.

There are two newly developed six-cylinder engines to choose from. The Cayenne’s 340hp (250kW), three-litre turbo engine delivers 40hp (29kW) more than the previous model. The 2.9- litre V6 biturbo engine in the Cayenne S, which reaches speeds of up to 265km/h, brings it up to 440hp (324kW) – an increase of 20hp (15kW). Equipped with the optional Sport Chrono Package, the new Cayenne S accelerates from zero to 100km/h in less than five seconds.

Based on the iconic 911 sports car, the brand’s SUV has been enhanced visually and features mixed tyres as well as rear-axle steering for the first time. On-road capabilities of the model are also further improved thanks to active all-wheel drive as standard, Porsche 4D Chassis Control, three-chamber air suspension and the Porsche Dynamic Chassis Control (PDCC) electronic roll stabilisation system. Despite its significantly extended range of standard equipment, the Cayenne S weighs up to 65kg less than its predecessor and remains perfectly suited to off-road use.

The appearance of the Cayenne has been further enhanced in line with the Porsche Design DNA. The enlarged air intakes at the front are clear indicators of the increased performance. Meanwhile, the new horizontal light edges result in the SUV appearing wider and more athletic, even when stationary. The luggage compartment volume has been increased by 100 litres and now offers 770-litre capacity. The wheels are one inch larger in diameter, with wider tyres on the rear axle for the first time, emphasising the improved driving dynamics. The iconic Porsche lettering spans across the redesigned rear lights, which feature a three-dimensional design and end-to-end narrow strip of LEDs.

The SUV’s default setting is the Onroad programme; however, four other modes activate the conditioning for mild off-road terrain: Mud, Gravel, Sand or Rocks. The drive, chassis and differential locks can be selected to adapt to the relevant scenario.

The new Cayenne combines three chassis concepts in one new design: sports car, offroader and touring car. Mixed tyres which are now on wheels of at least 19 inches are a characteristic sports car feature applied to the new models – improving stability and driving dynamics on bends.

For the first time, the Cayenne is available with electric rear-axle steering – a system tried and tested both in the 911 and the Panamera – improving agility on bends and stability when changing lanes at high speeds. The reduced turning circle also makes everyday handling of the SUV easier.

With its innovative Porsche Surface Coated Brake (PSCB), the manufacturer is once again assuming a pioneering role in the development of high-performance brakes. This world first is available as an option for all Cayenne models and consists of a cast-iron disc with a tungstencarbide coating. Exclusive to Porsche, the brakes are also visually impressive, with callipers painted in white, while the surface of the discs develops a unique gloss level after bedding-in.

Similarly to the 911 and the Panamera, the new body of the Cayenne also uses an intelligent combination of alloy and steel. One particular technical highlight is the innovative lithium-ion polymer starter battery, which alone accounts for a weight saving of 10kg over the predecessor model.

The third generation of Porsche’s SUV models are available to order now, with first deliveries arriving in January 2018. Call Porsche Centre Bahrain on 17 459-911.