From Predator to Prey 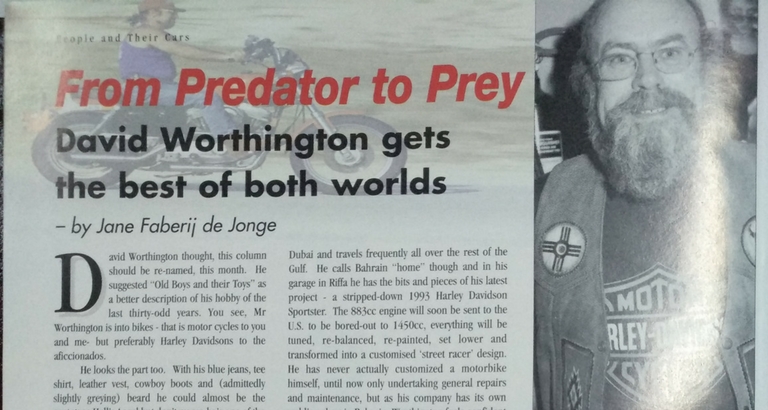 David Worthington thought, this column should be re-named, this month. He suggested “Old Boys and their Toys” as a better description of his hobby of the last thirty-odd years. You see, Mr Worthington is into bikes -that is motorcycles to you and me- but preferably Harley Davidsons to the aficionados.

He looks the part too. With his blue jeans, tee shirt, leather vest, cowboy boots and (admittedly slightly greying) beard he could almost be the prototype Hell’s Angel but don’t worry, he’s one of the good guys. Nevertheless, riding around town astride his Harley he cuts quit a dashing figure - you don’t, after all, see that many bikers in Bahrain.

David Worthington started riding motorcycles at the age of 16 in his native Lancashire. He first bought a 250cc B.S.A. and since then has owned more than 20 different British and Japanese bikes until, in 1993, he bought on the spur of the moment his first Harley Davidson. He is now a devoted fan of the immortal American ‘mean machine’. Although they may not be the fastest or most efficient bikes, he loves their traditional design and style. “They are built to last, you never see old Harleys on the scrap heap like you see Japanese models. Lots of people ride 20- or 30-year old Harley Davidsons as their normal every-day means of transport. And the basic shape of them has barely changed over the years either.”

As managing director of Gulf General Lift Services, David divides his time between Bahrain and Dubai and travels frequently all over the rest of the Gulf. He calls Bahrain “home” though and in his garage in Riffa he has the bits and pieces of his latest project – a stripped-down 1993 Harley Davidson Sportster. The 883cc engine will soon be sent to the U.S. to be bored-out to 1450cc, everything will be tuned, re-balanced, re-painted, set lower and transformed into a customized ‘street racer’ design. He has never actually customized a motorbike himself, until now only undertaking general repairs and maintenance but as his company has its own welding shop in Bahrain, Worthington feels confident he’ll be able to do a lot of the work himself, and it’s a project he can’t wait to get going with.

He also has a residence in Dubai and there his pride and joy is a shiny, black ‘96 H.D. Low Rider, a 1340cc standard model with a few extras and some judicious tuning. There he can be found most Wednesdays joining the very-active local Hogs (Harley Owner’s Group) on their weekly ride-out, when between 10 and 50 bikes join up for a cruise up-town and around. Apparently, the Hogs are also much in demand when new restaurants and clubs open - it’s good for business to have a few of these menacing monsters pulled-up outside. Also in Dubai, he drives a 5.2-liter Dodge Ram Pick-up truck, painted ‘traditional’ black with lots of chrome to match his Harley. He says he has never really been very interested in cars, Ferraris don’t particularly impress him, but this pick-up has totally captured his imagination. He says it’s arm-chair driving but macho too, just right for his image!

He now feels torn between which to take out for the night, the Dodge or the Harley, but depending on which he chooses he becomes either the predator or the prey.

This implies that one feels rather vulnerable riding a bike, especially in town. In fact, David thinks the traffic in the Gulf isn’t too bad for bike riders and, unlike Europe, not too fast either. To date he has not had an accident here (though there were a few near misses) but he did once drop his bike, at around 300 kilograms they are pretty heavy to pick-up again.

Last August he joined the Sturgis Rally in America, when bikes and their riders converged on a small town in Dakota and spend a week exchanging notes, riding out, competing and eating. This year he hired a bike in Los Angeles and covered 6,500 kilometers in three weeks - without getting a sore ‘derriere’! In future he says he’ll take one of his own bikes, bit the feeling was magic. American roads are just made for cruising on bikes, long, straight, open stretched with good road-side facilities and a great feeling of camaraderie. “It’s a special feeling, you ride away from all your troubles and worries, it’s like cleaning your mind.” In the 70s there was a cult book called “Zen and the Art of Motorcycle Maintenance.” It compared life to the art of riding and maintaining a bike in America. Everybody who mattered read the book, it was heavy stuff. Yet, even I, who had never even sat on a motorcycle could see the glamour and meaning of it all.

When David Worthington, a guy who seems very laid back and in control tells you that “….nothing can compare with the freedom of riding a bike. You have speed and agility, and with the sun or rain on your face, the wind in your hair (“doesn’t he wear a helmet?” I wonder) and a long highway ahead, you forget everything”…. Believe me, I’m with him. I want a Harley.