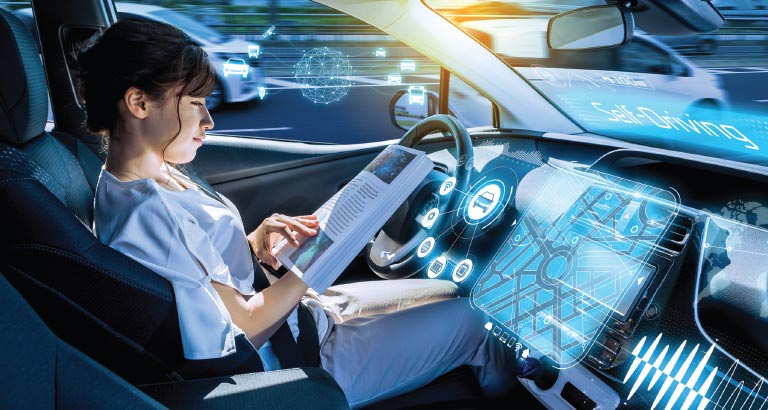 So, voila, the first of many articles hopefully. Two of the most debated and indeed perplexing automobile topics out there at the moment, for many diverse reasons, are self-driving and fully electric powered vehicles. In the months to come I’m sure they will repeatedly raise their enigmatic and fascinating heads on these pages. In this article, I will touch on self-driving, highlighting some of the wider issues and psychological hurdles it raises. Of course there are many considerations: responsibility for crashes, injuries, death. Will that lie with the manufacturer, the guidance control providers or indeed the sensor manufacturers? What about the courtesy and ethics of motoring, allowing someone to cross in front of you? Will our driving enjoyment be affected? Are we taking into account that big brother, aka, Mr Google will know where you go? Every. Time. He’ll be compiling that data into his data banks and using that information to feed you suggestive and unrequested advertising. Discussing this with a colleague recently, we concluded that self-driving cars only need to be better and safer than humans in order for them to be viable. However, without a shadow of doubt, the most important consideration must be safety. Obviously, this is paramount. Would you, could you relax in a vehicle not under your concentrated control?

One could argue that self-driving cars shouldn’t be available until they are absolutely perfect in every aspect so as to guarantee the safety of all occupants and other parties, but why? Human drivers certainly aren’t perfect. Recent statistics highlight that almost 90 per cent of total vehicle accidents are caused by human error. In 2013, the UK had 1,700 deaths, the USA 33,000 and China a whopping 260,000 – that’s a shockingly high body count, isn’t it? Indeed, I still shudder that a newly licensed driver in the UK can, on that same day, get to enter the frenetic madness of a motorway.

Of course, we would expect self-driving cars to be better than humans driving – they lack emotions to cloud judgement for example – but not perfect. Not at present anyway. In May 2017 a driver was killed in what is recorded as being the first fatal crash involving a self-driving vehicle. Tesla also had a recent fatality. But why wait to achieve self-driving perfection? Logically, if we have driverless cars which are better, and therefore safer, than humans, then it should certainly reduce that body count.

So we must allow the manufacturers such as Tesla, Mercedes Benz, BMW, Google and Audi, with systems ready to deploy, to introduce them to customers soon. The sooner they’re on the roads, the sooner learning curves commence. As with any technology, it is only through use and refinement that improvements can be made. From reducing the number of accidents to improving emissions and easing traffic congestion, refining the driverless revolution can begin. Ongoing trials lasting up to 36 months are already happening in many countries. These trials will also explore ramifications such as legal and insurance. However, the longer we delay the longer our streets, roads and highways remain needlessly dangerous. Let’s not demand impossible standards for these cars; start rolling them out now I say.

You will see my email address at the bottom of this and every subsequent article. If you want topics researched or have comments, suggestions or requests, drop me a line. I will do my best to address them in following issues. Happy driving – or, hopefully soon, happy journeys – as you’ll be in that driverless car, won’t you?