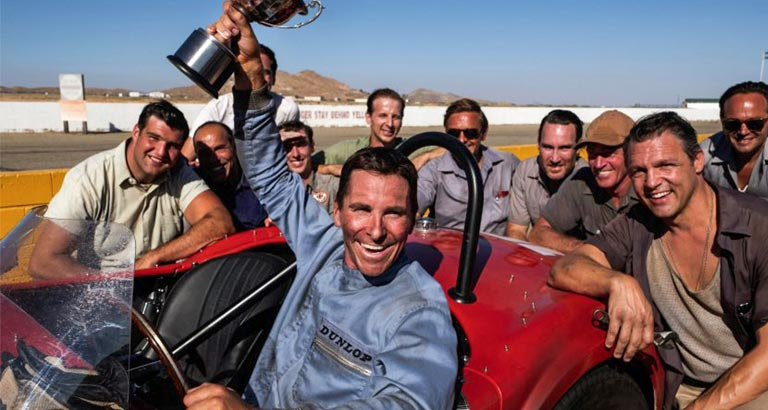 Dick Potter shares some fascinating history along with his thoughts on petrolhead movie Ford v Ferrari.

It seems that recently if I’m not in a car, I’m on a plane, (not that I’m complaining, you understand – either is fun!). On a recent flight, whilst flicking through the inflight offerings I came across the title Ford v Ferrari which gave me a pretty clear idea of the story parameters. Now, movies about car racing aren’t exactly ground-breaking, notable mentions on my list of aspirants include Le Mans, Senna, Grand Prix and Rush. Days of Thunder wasn’t too bad either. So, I decided to give it a go.

In the mid-1960s, Henry Ford II sought to buy Enzo Ferrari’s company as a short-cut to the sort of pan-global status that his trusty Blue Oval lacked. To kick-start the process, he tried to buy Ferrari, only to be rebuffed and insulted by the great Enzo Ferrari himself. Enzo was none too impressed that Ford wanted to hang onto budgetary control of the racing division Scuderia Ferrari, it seemed.

Miffed at the Ferrari rebuttal, the grandson of America’s greatest automobile maker hired former racer/engineer Carroll Shelby, played by Matt Damon, to do whatever was necessary to unseat the hugely dominant Ferrari racing team at the 1966 24 Hours of Le Mans.

Shelby brought in Ken Miles, played by Christian Bale, the best driver he knew, to help develop a car and race it. Starting with the Lola, which already had a V8 engine, the result was the GT40, one the loveliest Fords ever, in my opinion. The GT40 unseated Ferrari to take the three podium finishes at Le Mans in 1966 and Ford went on to win again from 1967 until 1969.

For me, little beats Steve McQueen’s 1971 Le Mans in nailing the noise and madness of endurance racing. However, even if you wouldn’t know a Ford GT40 from a Ford Fiesta, this offering goes a way to convey the insanity of 1960s’ racing. Remember, this was racing in an era when cars easily topped 200mph but were equipped with none of the safety protection of today’s race vehicles.

The turns, speed and sound pack in plenty of vroom and roar and in one hair-raising sequence, Miles struggled with a faulty door during the first lap. They fixed it by hitting the door with a mallet – not quite the solution I’d go for I confess, but then, I’m not a mechanic.

The 24-hour Le Mans race was conducted over 24 hours – you did gather that’s why it’s thus named, right? This was racing for each driver of four hours at a time, around an, at times, unlit, wet and rainy track whilst often cold, tired and hungry. To me the guys who did it were genuinely heroic men, if indeed somewhat certifiable.

Miles is something of a footnote in the glorious history of the beautiful Ford GT40, and I am pleased he was posthumously inducted into the Motorsports Hall of Fame in America in 2001. It was apparently said of this film that it wouldn’t reach out beyond the petrolhead fanbase, well I’d argue that the endless cutaways to feet dancing on pedals, racing-gloved gearshifts and rev counter close-ups are thrilling to anyone who can drive a car!