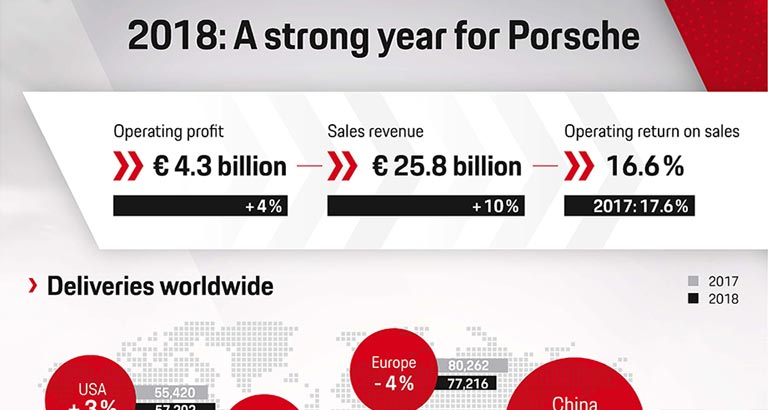 “In the 2018 financial year, our attractive product range enabled us to once again significantly increase deliveries. Porsche is synonymous with emotional petrol engines and high-performance plug-in hybrids; in the future it will be just as well-known for pure electric drive systems,” says Oliver Blume, chairman of the executive board of Porsche AG. Porsche will be investing around €15 billion in new products in the period up to 2023.

The sports car manufacturer is systematically expanding its offering in the field of electromobility: The Taycan, the first purely electrically driven sports car from Porsche, will debut in September, with its first derivative, the Cross Turismo, following at the start of the next decade, while the new generation of the Macan compact SUV will also feature an electric drive, making it the second purely battery-powered model series from Porsche. In this area, the company’s efforts are based on the projection that by 2025, half of all sales from the Porsche product range will be of electrically driven models, or partially electrically driven, plug-in hybrid models.
“Our workforce has more than doubled in just seven years,” Blume points out. “And electromobility is another driver of jobs; we’re creating 1,500 new roles to produce the Taycan alone. Our first purely electric sports car heralds the start of a new era – and we’re very optimistic that the Taycan will be a success. Given that we already have more than 20,000 people seriously interested in buying one, we will be adjusting our production capacities upward.”

Double-digit Growth Rates
“We achieved new records for sales revenue and operating profit in 2018. The increase in profit resulted in particular from a growth in volume, improved product mix, and positive development in our other business fields and divisions,” says Lutz Meschke, deputy chairman and executive board member for finance and IT at Porsche AG.

With a 38 per cent increase, the Panamera achieved the strongest growth in terms of deliveries, reaching 38,443 vehicles. But even the 911 recorded double-digit growth, despite the change in model generation: the number of sports cars delivered increased by 10 per cent to 35,573 vehicles. Deliveries of the Cayenne grew by 12 per cent, to 71,458 cars. The Macan continued to be the most successful model in terms of volume, at 86,031 vehicles. The Chinese market also retained its position as top performer in 2018, with growth of 12 per cent there, amounting to 80,108 units. With an increase of three per cent, to 57,202 vehicles, the US again took the second spot.

“The transformation of the automotive industry is in full swing. We are very much engaging with digitalisation, connectivity, and new mobility concepts,” comments Blume. In order to further reduce carbon emissions, Porsche is also focusing its attention on synthetic “power-to-liquid” fuels that are produced using renewable energy. “We see significant potential in the area of synthetic fuels as a way of making the operation of vehicles with combustion engines even more environmentally friendly – particularly in the existing vehicles,” says Blume. 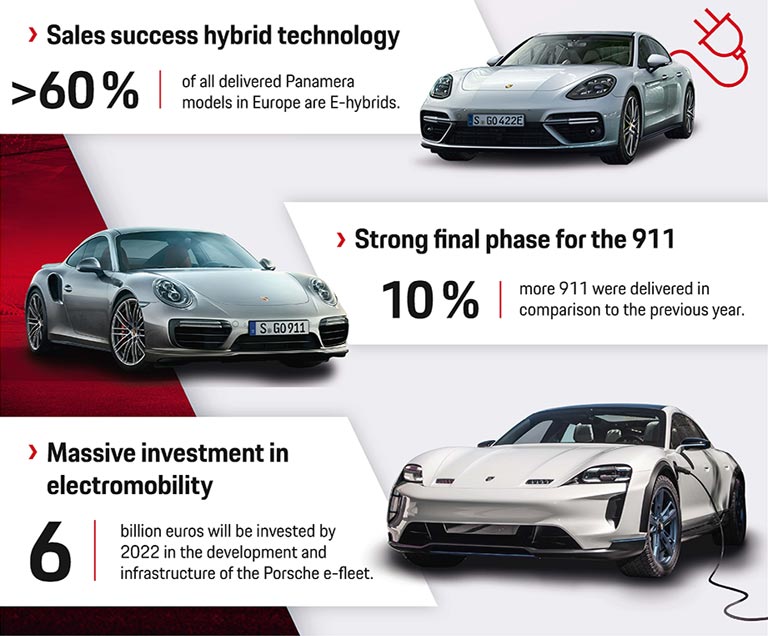 Further Growth Expected
“The switch to the new WLTP test cycle and gasoline particulate filters, combined with our elimination of new diesel-driven models, mean that the months ahead will also be challenging,” comments CFO Meschke. Despite this, Porsche expects increased deliveries in 2019, as well as a slight rise in sales revenue. “Our products create the foundation for a successful financial year. In particular in 2019, we will have the new generation of the 911 being launched in all markets worldwide; further model derivatives of the 718 and Cayenne; and the launch of the Taycan,” Meschke adds. He goes on to say that, despite very high levels of investment in electrification, the digital transformation and the expansion and renewal of certain sites, the company wants to ensure that it continues to meet its ambitious earnings target. “Through the use of efficiency enhancement measures and the opening up of new profitable areas of business, we want to continue achieving our strategic objective of an operating return on sales of 15 per cent,” he emphasises.