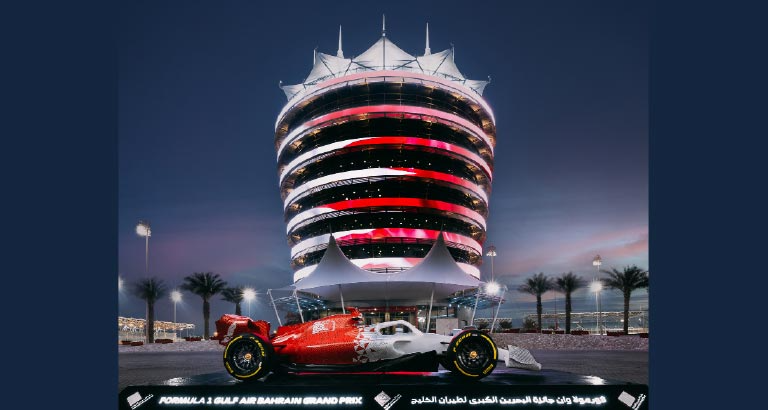 It seems like it was just yesterday that the smell of burning rubber and the roar of turbocharged engines last charmed our senses as the 2021 Formula One season came to a thrilling – and hugely controversial – conclusion in Abu Dhabi.

Whilst the talk over the winter break has focused on structural changes and new protocols at the governing body, the FIA’s, highest level amidst the fallout from Max Verstappen’s last-lap championship win, it’s time to get back on track (literally!) as the pinnacle of motorsport begins its annual whistle-stop tour of the globe this month.
Where better to begin than our beloved Kingdom, as the 18th Bahrain Grand Prix inaugurates the season under the lights in Sakhir. Fresh from signing a contract to continue racing here until 2036, another thrilling spectacle is bound to unfold before our eyes this month.

The 2022 season brings with it the biggest changes to the formula in 40 years. The new technical regulations redefine how the cars work in an attempt to solve the problems faced by drivers in recent years when it came to overtaking.

An F1 car›s speed is largely defined by aerodynamics. In the past, turbulent air behind cars disrupted the car behind and led to it losing close to half of its total downforce when following closely.

The technical boffins at the FIA suggest that with the new rules this year, a car following directly behind another will retain 85 per cent of its total downforce when one metre behind, rather than 57 percent in previous years. In theory, this should make overtaking much easier and stop faster cars being ‘held up’ behind another, especially on tight, twisty tracks.

Furthermore, a budget cap means the cars should be closer together in terms of performance, with less opportunity for the ‘big teams’ (the Mercedes, Red Bulls and Ferraris of this world) to find big advantages over the privateer manufacturers by virtue of their conglomerate backing.

Whether this actually comes to fruition remains to be seen. F1 has been here before where radical rule or design changes has simply maintained the status quo or actively harmed the spectacle (Pirelli tyres, anyone?). Yet have faith we must that we’ll finally achieve the dream of having five, six or maybe even all 10 teams competing for victories on any given day.

With all that in mind, here are some bold predictions for the season ahead. Note that this article was written before either of the pre-season tests in Barcelona or Bahrain, so by the time the season itself starts on March 18-20 I could already look silly!

Firstly, despite the aforementioned changes, I still expect the season to come down to two men, the standout talents of their generation. Lewis Hamilton, still vying for his record-breaking eighth world title, and Max Verstappen, fresh off his first but perhaps looking to prove a point that he deserves it after the farce in Abu Dhabi.

I’m going to go for Hamilton – and Mercedes – to win both titles with fire in their belly and a burning desire to restore justice after the drivers’ title was snatched from them on the final lap last year. Last time there was such a major shakeup of the formula in 2013, Mercedes established themselves as a dominant force with eight constructor’s titles in a row. Who’s to say they can’t repeat the trick?

Wait, that wasn’t very bold at all was it? Here’s one – the prancing horse is my dark horse. After a few years in the barren wilderness by their standards, I expect Ferrari back at the front fighting for wins on a regular basis. Their interpretation of the new rules has led to their car being the most strikingly different in design, catching the attention of many in the paddock. Whilst this could mean they got it all wrong (it wouldn’t be the first time!), the whispers are that they’ve had a stroke of genius. Here’s hoping, as Charles Leclerc and Carlos Sainz are two of the most talented youngsters on the grid.

This might be the final hurrah for Fernando Alonso, and after his Alpine outfit basically wrote off last year to focus their energy and budget on this year onwards, I think he may just pick up a win or two at the age of 40 in a hugely improved car.

Sadly for another former world champion, it’ll be a final disappointment for Sebastian Vettel whose career has had a downward trajectory since his halcyon days at Red Bull. Despite billionaire backing, I’ve plumped for the Aston Martin to be the let-down of the year and after another season of being towards the back, I think Vettel will walk away.

Out of the spotlight, I think the backmarkers will be closer and even fighting for points at some races, but I can’t see how the likes of Williams and Haas can consistently compete on a shoestring budget compared to other teams. It will be nice for youngsters like Mick Schumacher and Alex Albon to hone their racecraft and show what they can do rather than watching everyone else sail by.

As for the boldest prediction of them all … I think the new rules will have the desired effect and we’ll get another slate of thrilling races, daring overtakes and fiery confrontation. Start your engines!