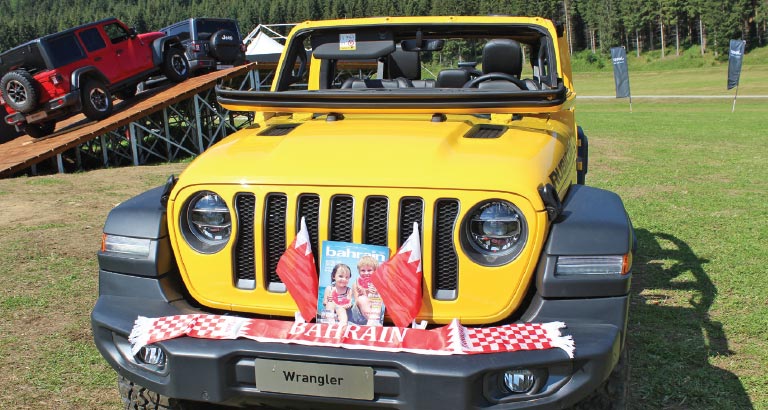 Jeep Wrangler invited BTM to Camp Jeep 2018 in Austria and Bill Grieve jumped at the chance to check out some iconic vehicles.

“Darwin’s Theory of Evolution By Natural Selection, simply put, holds that more individuals are produced each generation than can survive. Phenotypic variation exists among individuals and the variation is heritable. Those individuals with heritable traits better suited to the environment will survive.”

When Charles Darwin introduced the Theory of Evolution by Natural Selection in 1859, he had no idea just how close he would come to describing the evolutionary progress of the Jeep. Somewhere between an advanced racing car and a modern tractor, between a cheetah, a buffalo and a mountain goat, on a timeline never created, you will find the Jeep rang —  waiting, willing, wanting and purpose-ready to perform. 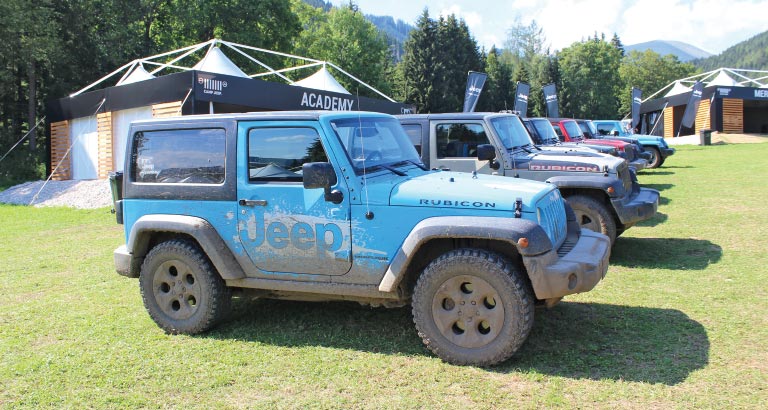 The Jeeps that have evolved are like civilization itself, far more advanced now than at any other time in history, and constantly evolving and improving to meet the challenges of clients that want only the best and consider position to be nothing and performance to be everything.

The annual Camp Jeep 2018 took place in Styria, Spielberg, Austria, attracting more than 1,000 Jeep enthusiasts and featuring 600-plus vehicles. The event is the largest on the Jeep Owners Group (JOG) calendar.

The stunning venue was also host to the international media launch of the all-new Jeep Wrangler. The most award-winning SUV range of all time took centre stage and there were several on- and off-road trails with different levels of difficulty to test the Jeep 4x4’s legendary capability and drivers’ own all-terrain skills with expert Jeep Academy drivers in the technical area.

The Museum Area told the story of the brand, the iconic Wrangler and how Jeep continues to evolve and perfect the technical qualities of its SUV range while remaining faithful to its tradition and uniqueness.
The story of the Wrangler commemorates the anniversary of the signing, in 1941, of the agreement to supply the US Army with the unstoppable Willys-Overland MA/MB – the Wrangler’s pioneering and illustrious forebear.

Visitors could trace the history through the three previous Wrangler generations from the first 1941 Willys to the present day. The Willys was a small four-wheel drive truck engineered for use on challenging terrains, to serve as a troop carrier and reconnaissance vehicle. The vehicle, built until 1945, was designated ‘General Purpose’, the acronym of which, GP, is pronounced ‘Jeep’.

At the end of the Second World War in 1945, the four-wheel drive military truck was used as the basis for the CJ-2A Civilian Jeep, the automotive industry’s first modern, off-road vehicle. Ever since then, Jeep has always stood for freedom as a state of mind and the determination to follow the instincts, with its ability to face any challenge thanks to its world-leading all-terrain capabilities.

These capabilities are hardwired into the DNA of all Willys and Wrangler models, including those on display in the museum area: a Willys MB dated 1944, a CJ-2A from 1945, a YJ from 1991 (the first Wrangler generation), a TJ 4.0 Sahara dated 1998 (second Wrangler generation) and the Rubicon 3.6-litre Recon, the special series based on the third generation of the Jeep icon.

Camp Jeep 2018 was open to the public on select days and served up a thrilling brand experience in authentic Jeep style. Official Jeep merchandising and Mopar accessories were featured in special areas, as well as shows, barbecues, children’s activities and live concerts to keep the crowds entertained and the unique atmosphere going throughout the weekend.

The Jeep Wrangler was the star of the event with many of the attractions designed to showcase the all-round ability and appeal of the latest generation of the brand’s most iconic model. Boasting the legendary off-road capability for which the Wrangler is famed, the new model is equally at home on and off the road, featuring a suite of advanced technology and specialist equipment, including two advanced four-wheel drive, active, on-demand full-time systems – Command-Trac and Rock Trac – plus Tru-Lock electric front- and rear-axle lockers, Trac-Lok limited slip differential and electronic front sway-bar disconnect.

In addition to testing the unstoppable Wrangler, enthusiasts who signed up for the fifth edition of Camp Jeep experienced a packed programme, which included the opportunity to test the extraordinary performance of the new Grand Cherokee Trackhawk, the most powerful and fastest Jeep vehicle ever – fitted with a supercharged 6.2-litre V-8 engine delivering 700hp – as well as exciting test drives in the entire Jeep SUV line-up.

The new 2019 Jeep Renegade was among the models available for testing, with its innovative range of turbo petrol engines developed to deliver greater fuel efficiency and outstanding performance both on- and off-road.
Visitors were also able to take a close look at the new Jeep Cherokee, the latest version of the brand’s capable mid-size SUV. With all of the off-road ability expected from a Jeep model, the new Cherokee offers a fresh take on the brand’s classic style elements and is packed with user-friendly technology for superior comfort, connectivity and occupant protection.

Another dedicated area hosted some of the most significant custom-built concept cars displayed over the last four years at the annual Easter Jeep Safari – the event for off-road enthusiasts that takes place in Moab the week before Easter. Three of them – the Jeep Safari, the Jeep Trailcat and the Jeep Wrangler Africa – are unique, extreme customisations of the Wrangler and pay homage to the icon of the Jeep brand, while the B-Ute and Wagoneer Roadtrip are based respectively on the Renegade and Wagoneer.

Anyone wanting to take a souvenir home as a reminder of this great event had a selection of official Jeep products in the merchandising area, while the Mopar area offered a vast array of original accessories and parts for customising Jeep SUVs.

This area also displayed two different customisations of the Jeep Wrangler Sahara for visitors to admire: one capable of showing off the legendary off-road capabilities of the iconic Jeep, and the other put together for those who wanted to stand out with their unique style in the city, too. The first – the ‘Off-road’ one – featured a 2’ lift kit, 17’ off-road gear wheels and tyres, 1941 hood graphic and Moab body graphic, moulded splash guards, mesh bikini, snorkel and specific windscreen off-road lights. The second – the ‘Urban’ one – exhibited silver valve caps with Jeep logo, 1941 body graphic, 32’ tyre cover and several chrome details adorning the tube steps, door sills and fuel door.

Everything was ready for the new adventure in the best Jeep Jamboree style following the stars-and-stripes tradition of gatherings created to savour the excitement that everyone feels when joining the big Jeep family. About 30 of these events are held every year, from California and Maine to Arizona and Tennessee. Jeep Jamborees all propose the same winning formula as the first meeting held in 1953 on the legendary Rubicon Trail in the mountains between California and Nevada.