The First, Unique and Different 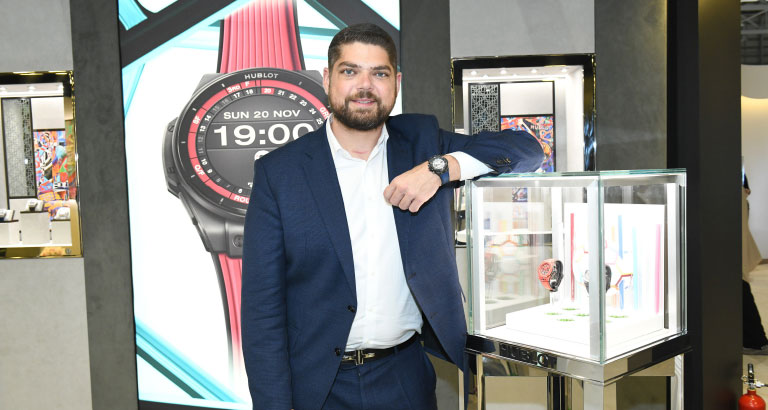 The Swiss watchmaking brand Hublot has been synonymous with innovation since the year 1980. During the dazzling Jewellery Arabia 2022 exhibition, Farah Baig sat down for a chat with Hublot’s Regional Director of Latin America and the Caribbean, Middle East and Africa, David Tedeschi. He shared his insights on why the brand’s collections are coveted around the world, its presence in the Middle East and the company’s brand ambassadors.

Hublot needs no introduction to discerning watch-wearers around the world. This has been the result of the brand’s ground-breaking craftmanship, attention to detail and its watches’ carefully-engineered movements. Hublot’s Regional Director of Latin America and the Caribbean, Middle East and Africa, David Tedeschi, has been involved with the brand for the last 15 years.

“As a child, I was actually quite passionate about watchmaking and then studied in Switzerland to become an engineer in the trade. I was always attracted by Hublot and interested in the brand, and then in 2008 I had the opportunity to be a part of the company while I was still studying and never left,” says Mr. Tedeschi.

This is Hublot
The watchmaker has been known to be ahead of its time and has consistently reinvented the industry. “At Hublot what we like to do is be first, unique and different in every way and I would say our philosophy is ‘the art of fusion’. Why ‘the art of fusion’? This is because we’re leaders in creating watches with new material,” he says, highlighting two watches that were on display.

“These two pieces can exactly represent what I just said. On the left, you have the first bright ceramic watch that was ever produced, while on the right it’s a mix of a ceramic case with the bezel crafted with a material called Magic Gold. Both these materials are patented and completely exclusive to Hublot,” he explains.

Magic Gold is the only 18K gold which can withstand scratches, even when the wearer has an extremely active lifestyle, making it a true revolution in the world of precious materials. “The material is something that we’re quite proud of as there have been no innovations as such with gold alloy since the time of Ancient Egypt,” he says.

One of the main factors that have made the brand stand out in the region and around the world is its exclusivity. “While all of Hublot’s watches may be exclusive, our limited-edition collections are even harder to get your hands on. One of our latest limited-edition collections was created in collaboration with Takashi Murakami – the world-famous Japanese contemporary artist. There were only 100 pieces in the world and people were willing to pay 10 or 15 times the price just to get it,” he says.

Takashi Murakami is known for his visually modern style which tends to merge Japanese tradition and pop culture. One of the most eye-catching watches created as part of the collection was the colourful Takashi Murakami Sapphire Rainbow. 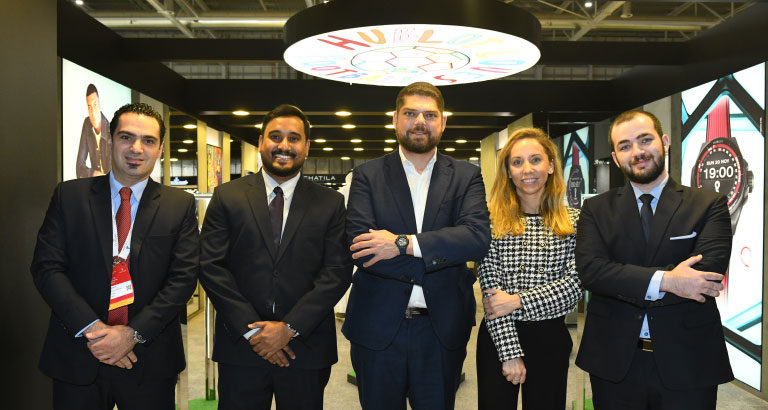 On the Middle East
“Hublot has had a very longstanding partnership with Bahrain Jewellery Centre. In fact, it is our oldest partnership in the region as they have believed in Hublot since 1980 and we have been with them here in Bahrain since,” says Mr. Tedeschi. “They are friends of the brand and I am positive this partnership will continue to grow and develop over the years.”
Of the brand’s collection, the Classic Fusion is the most popular in Bahrain. “On top of that, I would say that Bahrain is one of the GCC countries that sells the most to women which is really incredible to us. Every watch brand tries to attract the interest of women as watches tend to be a little bit of a man’s world,” he explains.

The region as a whole is one of Hublot’s biggest markets, and is also quite different from any region which the company has a presence in across the world. “This is due to the fact that the type of watches we sell in the Middle East are not exactly the same as what we sell in Europe, with quite a difference between collections,” he says.

“For instance, there is a preference here for more classic watches as opposed to sporty watches. Hence, we are leading in terms of sales with our Classic Fusion collection,” he adds.

The Feminine Appeal
The Middle East is also the biggest in terms of percentage of women buying Hublot watches, representing approximately 40 percent of sales in the region whilst around the world it represents just 25 percent. “It really means that women appreciate the brand a lot in the region which is a significant goal attained as women are more interested in jewellery,” he says.

Mr. Tedeschi believes that this interest may be due to the brand’s strategy in the region which includes dedicated campaigns for women on a local and international level. “We are signing on more friends of the brands and more female ambassadors while, of course, extending our product range in the women’s segment. More women are interested in the Classic collection, but also the Big Bang collection which is important to us because women also influence what men purchase,” he says.

Being the First
All eyes are on the pitch this season with football fever taking over the world. Hublot is a highly significant part of it, being the official timekeeper for the FIFA World Cup. “At the moment, it’s our biggest partnership and activation in football in general. Again, we always try to be first, unique and different in everything that we do. Back in 2006, we were not only the first watch brand, we were the first luxury brand to enter the world of football,” he states.

“At the time no one believed a luxury brand should sponsor football in a way because it’s a mass sport, but it’s also a sport that unites people and nations. Everyone watches football and it presents us with an opportunity to really develop our brand image and that’s what’s important for us,” he adds.

One of the brand’s most notable ambassadors is none other than the French professional footballer Kylian Mbappé. “It really is an amazing story when it comes to Kylian. When we choose an ambassador, they are usually already a Hublot client; we don’t partner with people just to create a buzz and benefit from their reach. When we choose an ambassador, we really have to be able to transmit our philosophy and our values into that person and he has to share our common values. Kylian Mbappe is the best example of this,” says Mr. Tedeschi.

“Most people assumed that we signed him because he won the World Cup in 2018, but we actually signed him at the start of the year and he was not a world champion at the time. Kylian is important to us not only as a footballer, but as a young man, a young businessman and athlete who talks to the younger generation,” he elaborates.

By reaching out to the younger generation, Mr. Tedeschi believes that they may then become more aware of Hublot and possibly even become clients. “Younger people, even those under 18 years old will become our client in five, 10 or 15 years; it’s the right time to connect with them about Hublot’s presence. So really, it’s about connecting with the younger generation – future Hublot wearers,” he concludes.