The McLaren Artura - A Revolutionary Supercar! 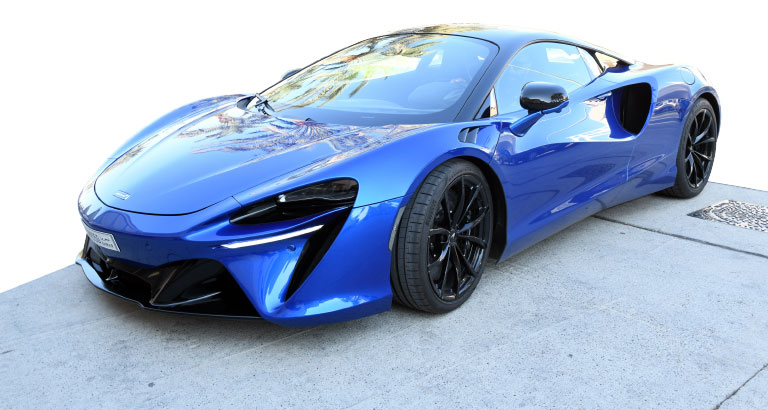 Motoring marques old and new are embracing a green future, with even the staunchest supercar makers swapping pure petrol-devouring beasts for electrical hybrids. Our motoring correspondent Kristian Harrison took the McLaren Artura, the company’s first production hybrid, out for a spin on Bahrain’s roads.

The life of a journalist is not always easy, but there are certain experiences that leave you with a deep sense of privilege. Being one of the first people in Bahrain to experience McLaren’s first high-performance hybrid supercar, the Artura, is one of those occasions.

The British brand, which is part-owned by Bahrain’s sovereign wealth fund Mumtalakat, has just announced the start of regional deliveries of this beautiful motor, which the company expects to account for 50 percent of regional sales in 2023.

This revolutionary supercar is a distillation of every attribute inherent in a McLaren, combined with faster throttle response, lower emissions and the ability to run in pure EV mode, thanks to its ground-breaking electrified powertrain.

I was invited to put the car through its paces, starting at the Bahrain International Circuit before a jaunt down the island’s west coast and brand new highway towards Jumeirah Gulf of Bahrain Resort and Spa.

Getting into the Artura, with its low roof and gullwing-opening doors, is a bit more difficult than I expected now I’m in my Thirties, but I felt like a kid again as soon as I used the plethora of switches, buttons and dials to get comfortable and fire the engine up.

Or so I thought… pushing the Engine Start button delivers the first mild surprise – the sound of silence. The first part of the journey was made in EV mode, which has a range of approximately 30km.

While EV mode is clearly designed for cities, not long stretches of road, and is limited to no more than 130kmph, it actually suits the car impressively well: the Artura’s new second-gen carbon architecture stays quiet and rattle-free even without the distraction of a combustion engine.

However, the fun really began when I moved up to Sport mode, which is likely to be the everyday default for anyone who buys a car like this (sorry, tree huggers!).

Hearing the 2,993cc twin-turbocharged V6 engine growl into life was heavenly, and paired to an eight-speed transmission it meant for instant gratification every time I hit the accelerator.

Seriously, if you’ve never been at a standstill in a sleek, curvy model like the Artura and feel the exhilaration of full acceleration, then you haven’t lived. I felt every single unit of horsepower from the 671bhp engine and while pulling 720Nm of torque, I managed to hit 0-100kmph in three seconds flat in what felt like half the time. The smoothness and speed of the upshifts was incomparable to other similar supercars I’d driven before.

My friendly co-pilot, Salman, was happy to let me explore the boundaries of the vehicle (within speed limits of course!) and really put it through its paces. In particular, I put the brakes to good use, which unlike brake-by-wire systems in similar models requires firm hydraulic pressure to slow the car down. It takes some getting used to, but on the track or in an emergency situation it’s a comforting feeling to be able to control your deceleration as accurately as possible.

The handling was razor-sharp, changing direction at the flick of the wheel, although stability and control was never under any threat from fishtailing or other potential demons.

My limited time with the Artura prevented me from exploring the infotainment features in great detail, but Apple CarPlay and Android Auto come as standard, along with the usual tools such as GPS navigation and Bluetooth.
For the princely sum of BD107,225, this is one of, if not arguably the best hybrid supercars on the market. Alas, I will have only the memories of my half hour with the car to cherish going forwards, but if you’re interested in finding out more, visit the Kanoo Motors McLaren showroom in Tubli or visit bahrain.mclaren.com/en.