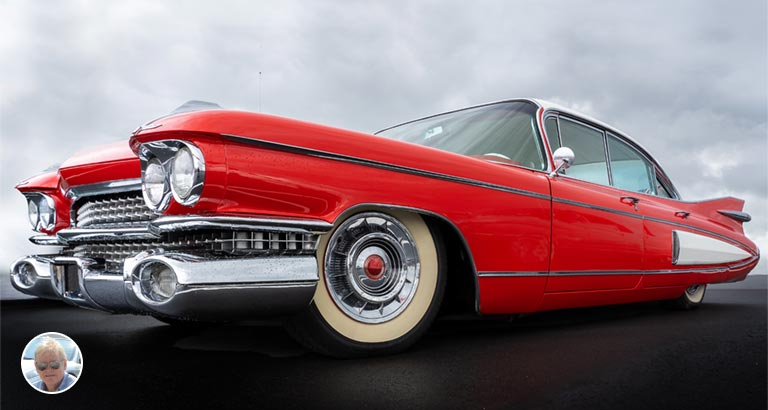 Dick Potter explores the contributions of the US to the motoring industry.

The American contribution to the motoring industry, we may all concede, cannot be said to be too shabby at all. After the Great Depression and World War II, almost three-quarters of all cars produced worldwide were made in the US. After this prolific start, America›s automotive industry grew rapidly and soon evolved into the largest in the world. The USA held that rank for decades- only being overtaken by Japan in the 1980s.

Henry Ford - a name synonymous with American cars - designed his first moving assembly line in 1913 and revolutionised the manufacturing process of his Ford Model T. His assembly line, at the first Ford plant in Michigan, became the benchmark for mass production methods around the world. Since 1976, the blue and silver Ford oval has been used as an identification badge on all Ford vehicles, providing an easily recognisable and consistent brand for all the company›s plants, facilities and products around the world. The chap who founded Wal-Mart, clearly not short of a fil or two - chose to drive a Ford from the time he bought it in 1979 until his death in 1992. We could of course assume he was a just a very frugal man, however, I’d prefer to consider it a testimony to Fords exemplary workmanship.  Not surprisingly then, Ford is one of the two most popular iconic cars in America today, namely the Ford Mustang model. The Chevrolet Corvette, unsurprisingly, is the second of the two most popular and iconic.

One cannot however think of American vehicles without the image of the ubiquitous pick-up popping up. I wasn’t aware that the Ford F-150 pick-up has been the best-selling truck (and vehicle) in the United States for more than 40 years. I was also unaware that the very first Chevrolet (Chevy) pickup truck from 1918 came without a bed, and buyers had to install their own. Thankfully, today›s Chevrolets don’t require such motoring mastery. The Ram name only showed up on a pickup truck in 1981- technically then, making the Ram 1500 a millennial. There are four states where the Ram series (1500/2500/3500) are the most popular pick-ups: Wyoming, Nevada, Arizona and Arkansas.

General Motors Cadillac Escalade is a very lovely SUV that I have had the pleasure of driving for quite some time in Bahrain.  Essentially, the Escalades aesthetics were similar to the GMC Yukon Denali and actually the Escalade›s underpinnings were borrowed from the Denali line, with the GMC logos on the centre caps replaced with Cadillac›s crest. I particularly liked that the only standard colours the Escalade were available in were, Silver Sand, Sable Black, Aspen White and Bordeaux Red Pearl-and what other colours would you need for an SUV anyway? To my mind, the Escalade is America’s version of the UK’s Range Rover- in terms of its use as a means of ferrying around Celebrities and a Bodyguard type of vehicle!

On the topic of ‘Celebrities’, many of us dream of just seeing some of the vehicles that Hollywood’s most successful stars drive on a daily basis. However, it may come as a surprise that the Tesla Model S remains the most popular among some of the world’s richest and most famous people.  Tesla continues to attest to the remarkable American contribution to the automobile industry and is an American car that I’m still waiting-with great anticipation-to drive if not own in the not-too-distant future.