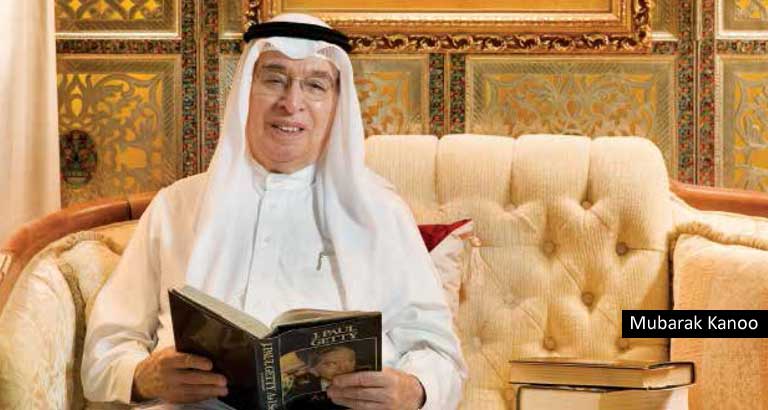 Mubarak Kanoo looks back at a life of achievement that started from humble beginnings and culminated in the establishment of a travel business empire spanning the region.

A pioneer in the travel and tourism business across the Gulf region, Mubarak Kanoo can be credited with introducing personalised services in the travel sector, marking a unique approach to customer service. The vice chairman of Kanoo Travel has never shied away from looking back at days when he personally drove around clients, or knocked on doors of expatriates, to sell air tickets.

“I could see the offices of B.O.A.C., Middle East Airlines and Iraq Airways and expatriates travelling to and fro, as I was growing up. I knew that travel would be a significant commercial enterprise in the years to come in Bahrain,” he says.

Starting from an office with three staff, a telephone and a station wagon, Kanoo Travel is now has over 200 offices with over 1,000 employees in the Middle East. Presently, the company has travel offices throughout Europe, France, the UK, Egypt and the Gulf Corporation Council States.

At 75, Mubarak chooses to reflect on a life less ordinary. “I hope the youngsters of today understand what we went through to build what we have today. If they have the talent for a business, they should start on their own instead of waiting for jobs from elsewhere,” he says.

Armed with an unwavering self-belief and boundless patience, he has fashioned the Kanoo Travel business as it stands now despite the occasional hiccup. Over the decades, his willingness to accept and develop a progressive management policy has helped the business expand. He has also firmly stood by his team of employees, many of whom have worked with him for over three decades.

Mubarak’s services to the business community in Bahrain were recognised in 2000, when HM King Hamad decorated him with the Sheikh Isa bin Salman Al Khalifa First Class Medal.

Just after the Second World War, young Mubarak set out to Nasik in India for his high schooling with the specific objective of studying English. He travelled by boat from Bahrain through Dubai, Muscat and Karachi reaching Mumbai 11 days later. Since he had no money to afford a traveller’s cabin, he slept on the deck, which was not too unpleasant considering that it was the monsoon season.

He later attended the American University of Beirut for three years. Back in Bahrain, after completing his education in 1951, Mubarak set up a small travel agency — a first in the region — with three Indian staff. The business achieved IATA (International Air Transport Association) status the same year.

Mubarak primarily dealt with expatriates going on leave and introduced the “meet and assist” concept in travel, which has become the hallmark of the group’s travel business.

Besides writing tickets, he ferried expatriates from the airport in Muharraq to the Bapco offices in Awali and back in his station wagon. He would personally drive the vehicle, making sure he reached the airport on time for the 3am B.O.A.C. flight before the drawbridge on the Muharraq Causeway closed at midnight.

In 1955 Mubarak along with his cousin Abdulla started a business in Saudi Arabia Eastern Province of Al Khobar and Dammam which has now expanded throughout the Kingdom of Saudi Arabia to include offices in Riyadh and Jeddah. He gradually began to assist expatriates with all their other travel arrangements, often knocking on doors to offer his services.

After spending five years shuttling between Saudi Arabia and Bahrain to establish his travel business, he decided to venture into the United Arab Emirates. By 1961, he had obtained a trading license in Dubai and another one for Abu Dhabi, followed by an office in Sharjah.

While he was working in Saudi Arabia, Mubarak remembers watching an Amercian Express counter at the Dhahran Airport wistfully and wishing that one day he could join hands with the travel behemoth.

The dream was realised in 2003 when Kanoo Travel entered into a business franchise relationship with American Express to develop the corporate and leisure market in the Middle East. The relationship now extends to Europe, with both jointly operating 18 travel locations in the UK, and Kanoo Travel acquiring 12 foreign exchange service offices in the UK and France.

Bahrain has immense potential to attract tourists as an international destination, but the Kingdom should first develop its beaches and hotels to attain that, Mubarak feels

Reminiscing about his trip to Mombasa in the 1980’s accompanying the late Amir, His Highness Shaikh Isa bin Salman Al Khalifa, Mubarak says that they were struck by the volume of tourist traffic at the island seaside resort they were staying in.

“Sheikh Isa asked the manager what was special about the hotel that attracted so many tourists. The manager told us that they had eight hotels built on the beach in collaboration with Aga Khan, whose companies in Europe brought in tourists to these resorts. For STG500 a week, tourists could have an accommodation inclusive of all meals. Clean rooms, clean beaches and decent food — that’s all a tourist wants,” he says.

Mubarak believes the tourism sector can generate almost as many jobs as the oil industry, provided it is handled well.

According to him, most Bahrain hotels are overpriced and the Kingdom needs more three-star hotels and not bigger properties, to attract tourists. He has always championed the cause of inbound tourism to the island.

“Not every tourist can stay in a BD70 a-night hotel. Wooing tourists is not a joke. We need more three-star hotels with tariffs that are more reasonable. We need to develop beaches on the south of the island and build around seven to eight hotels there in the three and four-star categories,” he says.

Having personally catered to expatriates in his early business days, Mubarak understands that tourism is more of an art. “We need to have the right people running the trade. Bahrain also needs a tourism authority to promote the Kingdom as an international destination,” he feels.

Mubarak had the good fortune to travel with Shaikh Isa on many trips, both personal and official. During Shaikh Isa’s official visit to the UK in 1984, Mubarak as one of a number of senior Bahrainis accompanying him, was conferred the Honorary Knight Commander of Civil Division of the Order of the British Empire by Queen Elizabeth II, in recognition of the role played in strengthening commercial links between Bahrain and Britain.

Mubarak also heads the Bahrain Japan Friendship Society, an organisation that he joined with the objective of wooing the Japanese to come to Bahrain.

“We’re inviting both trade and tourism ties with Japan. We’d like the Japanese to come and build factories and small industries here. Bahrain has unique and distinct advantages for them; the free trade agreement with the US which allows them custom duty exemptions, efficient logistical shipping and freight forwarding facilities as well as the large export market on the other side of the Saudi Causeway,” he notes.

Mubarak believes he is blessed with two attributes which have helped him tremendously in his life – lots of patience and his ability to keep his temper in check always. Indeed, Mubarak cannot remember the last time he lost his temper! He credits his grandmother for instilling patience in him as a child.

“I believe in being patient. I have never failed in negotiations with any company in my career and have always managed to convince people with my ideas. I’ve learnt that losing your temper gets you nowhere. It is patience that ultimately pays off,” he says.

At 75, Mubarak is sprightly, mentally alert and full of life. He is in the office everyday at 8am, sharp. “I listen to my staff and believe in treating them with courtesy and care. They know that they can always approach me as I believe that most problems can be solved,” he says.

Mubarak derives energy and inspiration from long evening walks, sound sleep and inspirational reading and writing. He is also busy grooming the next generation of Kanoos to eventually take up the reins.

A man of talent and experience, he was working in Dammam in the late 1960s when the chairman of Saudi Aramco suggested that a bright individual like him should attend Harvard Business School. Consequently, in 1970, he went to Harvard to pursue an MBA degree for working executives as well as business courses from the Universities of Stanford and Pittsburgh.

“It took me around a month to settle down and get used to the American system of education, but I learnt a lot in terms of industry know-how and handling and solving problems,” he says.

Forever an optimist, he believes in seeing the sunny side of everything and you can find some of his favourite quotations on the BTM website which clearly illustrate his philosophy to life.