An Expat's Guide To Bahrani Cuisine 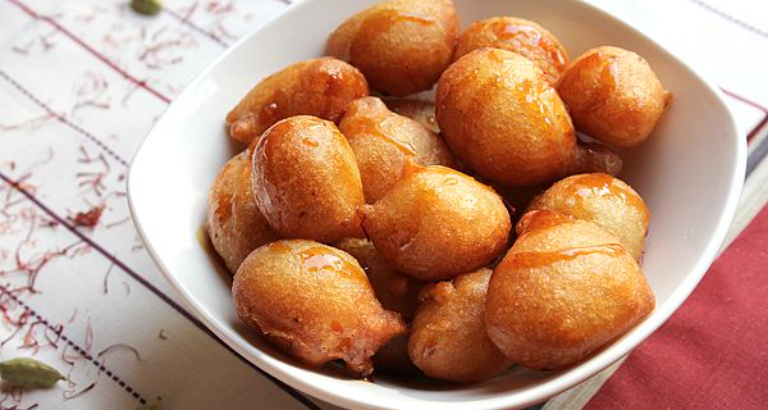 Get acquainted with the Bahrani foods you may encounter on a regular basis.

One of the most exciting things about visiting or moving to a new country is trying out all the food and Bahrain has no shortage of tasty, unique dishes.

Our small island state’s cuisine consists of dishes such as biryani, harees, khabeesa, machboos, mahyawa, maglooba, quzi and zalabia. Some of these can even be enjoyed with a cup of Arabic coffee.

If none of these dishes sound familiar to you, read on to get acquainted with the Bahrani foods you may encounter on a regular basis. 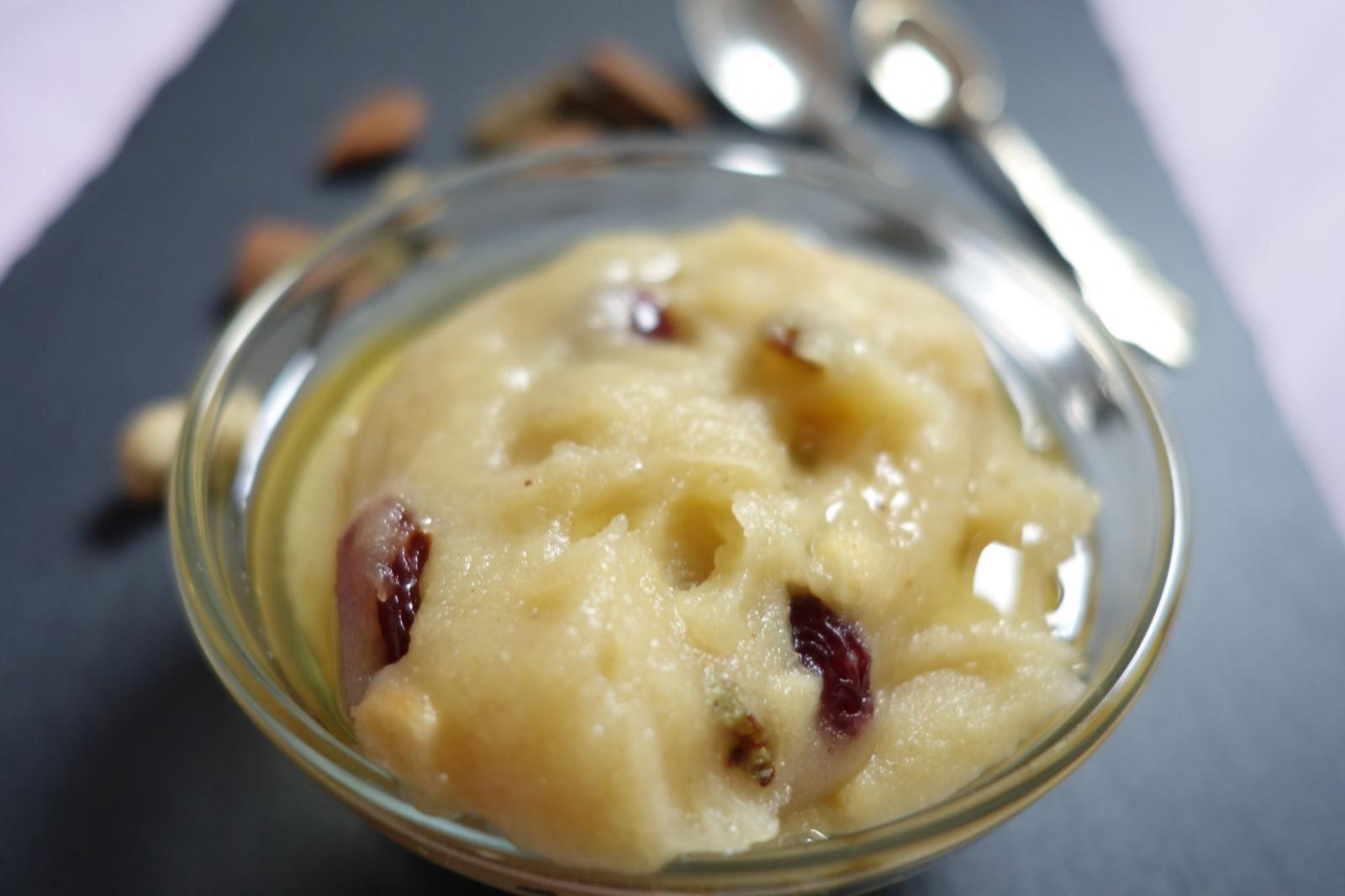 Halva (sometimes called halvah or halwa) is a type of confectionery originating from Persia and widely spread throughout the Middle East. The name is used for a broad variety of recipes that generally present as a thick paste made from flour, semolina, or finely ground seeds or nuts, and sweetened with sugar or honey.

Machboos, also known as Kabsa, is a popular rice dish from the Arabian Gulf made with either lamb or chicken. The term “machboos” or “kabsa” actually means “pressed” in Arabic. Much like the jollof rice dish from Northern Africa, how machboos is made varies slightly from region to region. 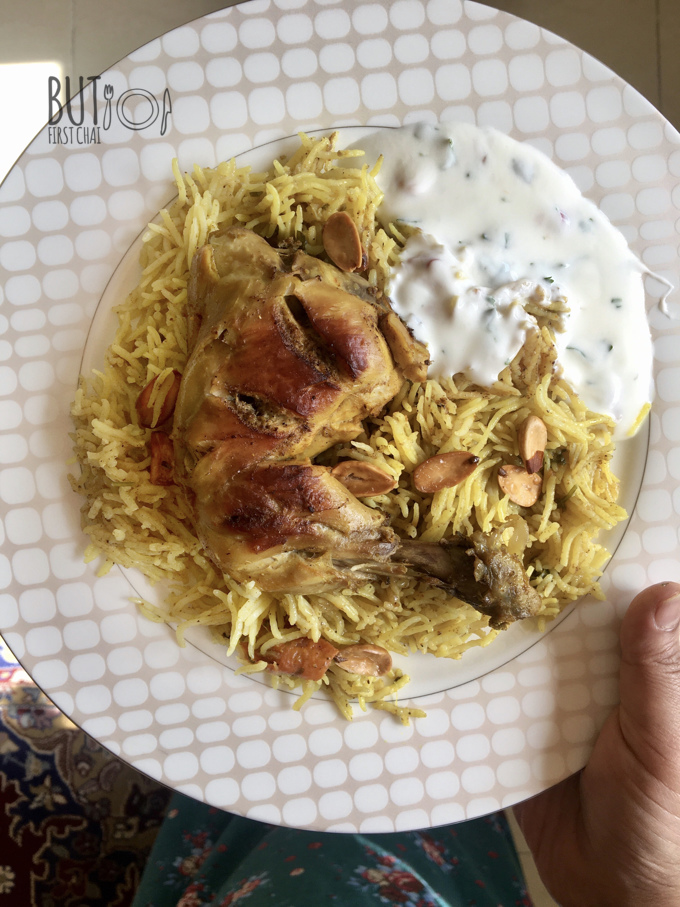 Umm Ali (also referred to as Om Ali, Omali or Oumm Ali) means "Mother of Ali" and it is a traditional Egyptian dessert. In fact, it is the national dessert of Egypt even though it is popular throughout the region and comes in numerous variations with different compositions.

Emmawash or Amwash is a famous traditional dish consisting of dried shrimp rice and green beans. It is usually consumed during Ramadan. 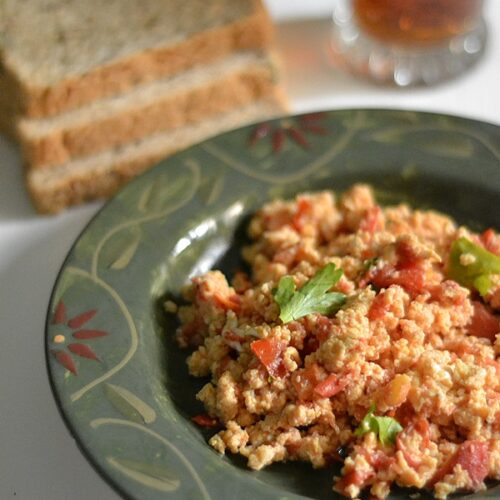 “Baid” means eggs in Arabic, and “tamat” or “tamatar” is tomatoes so this dish is basically “eggs with tomatoes.” 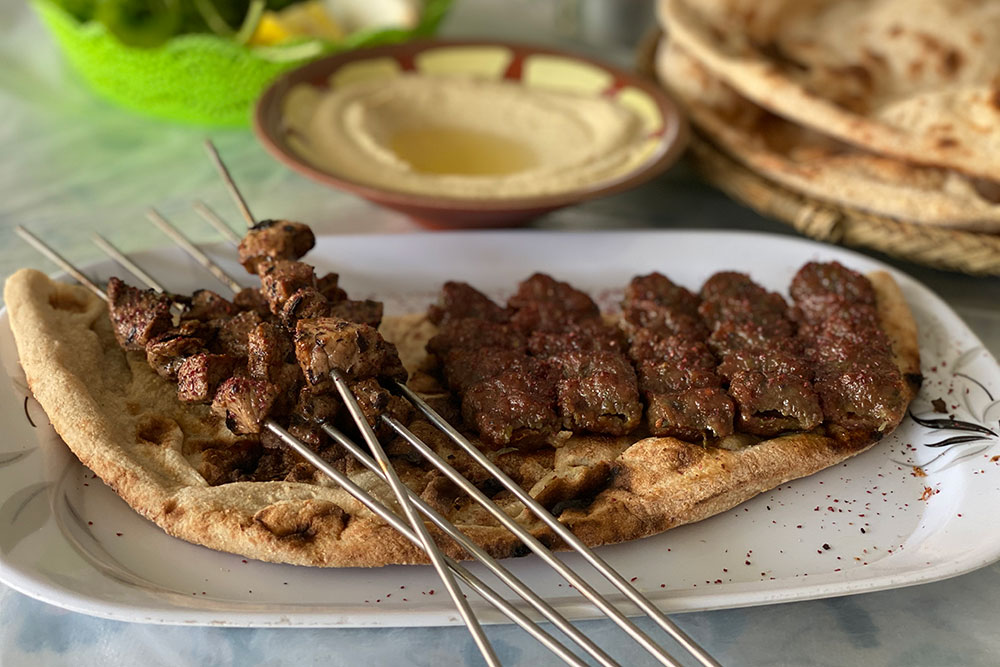 Bahraini kebab is very popular during Ramadan and is usually served during iftar. Described as “crisp on the outside with a soft interior, the Bahraini kebab makes a great little spicy vegetarian appetizer, delicious when served with a cool refreshing yoghurt and coriander dipping sauce” according to Slurrp. 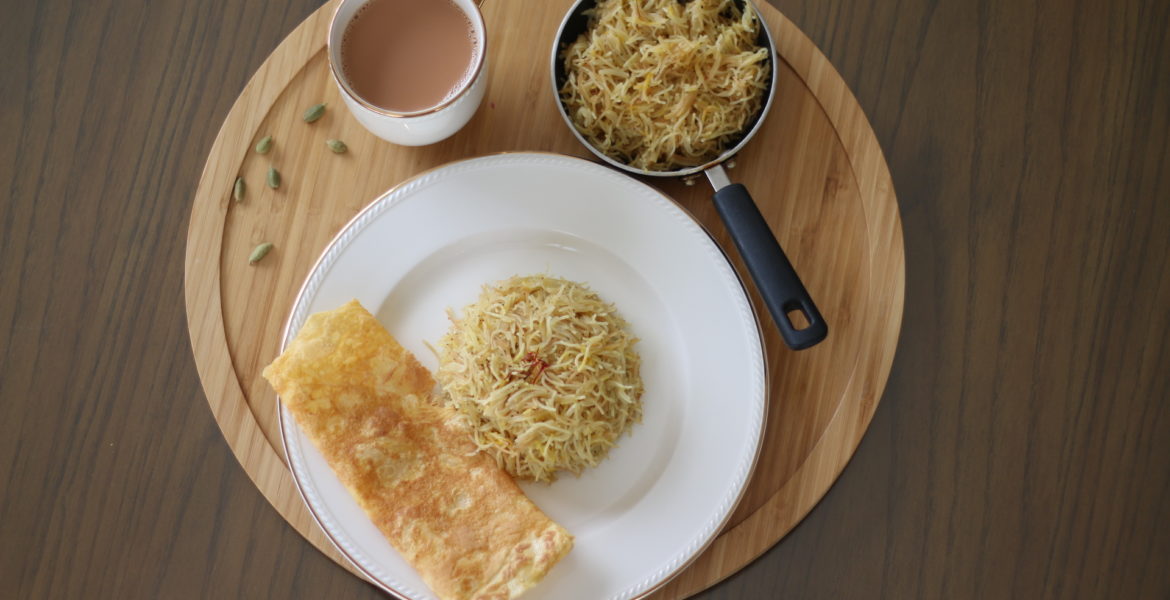 Balaleet is a traditional sweet and savoury dish popular in the Arab states of the Persian Gulf. A popular breakfast choice, it traditionally consists of vermicelli sweetened with sugar, cardamom, rose water and saffron, and served with an overlying egg omelette. It is sometimes served with sautéed onions or potatoes. 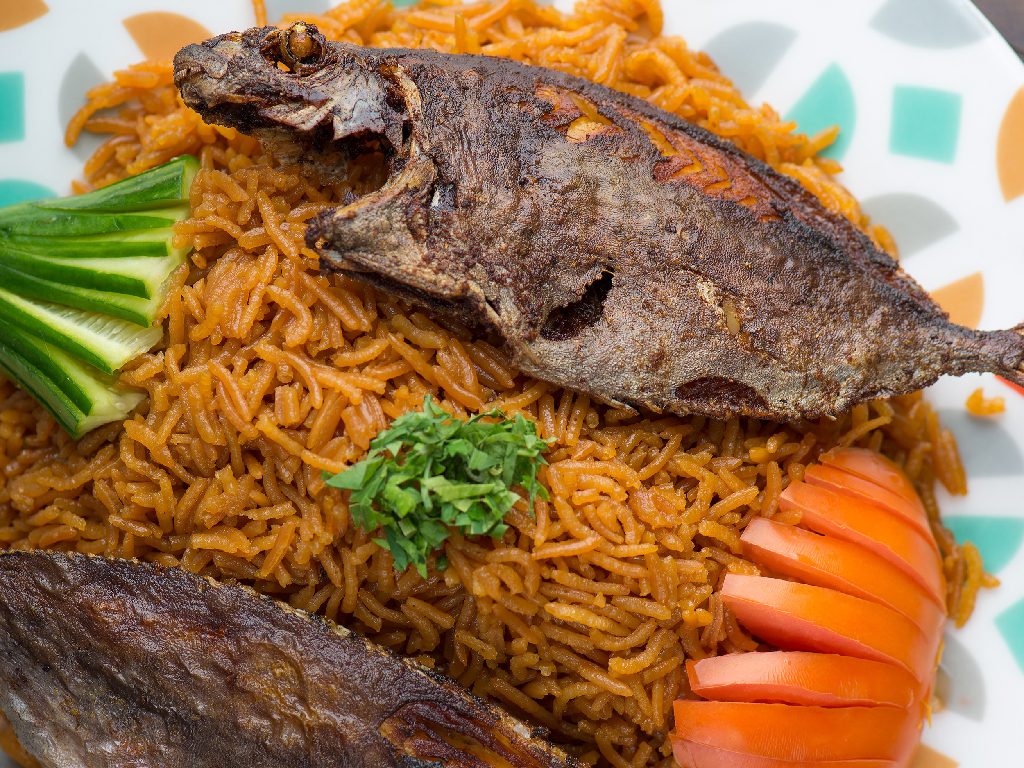 Safi and sweet rice are a must-have dish in Bahrain. Safi is also known as rabbitfish is a small grey-looking fish and it is said to be very tasty. It is usually cooked and served whole. 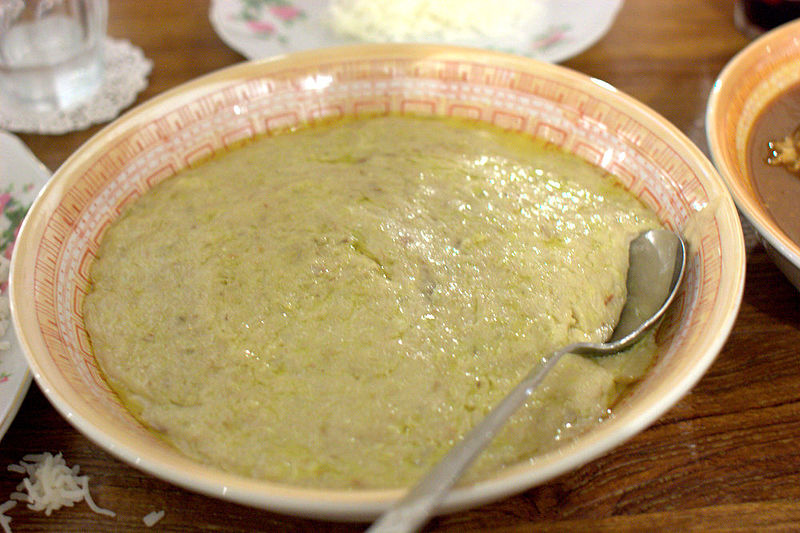 Harees, jareesh, boko boko, or harisa is a dish of boiled, cracked, or coarsely-ground wheat, mixed with meat and seasoned. Its consistency varies between a porridge and a gruel. 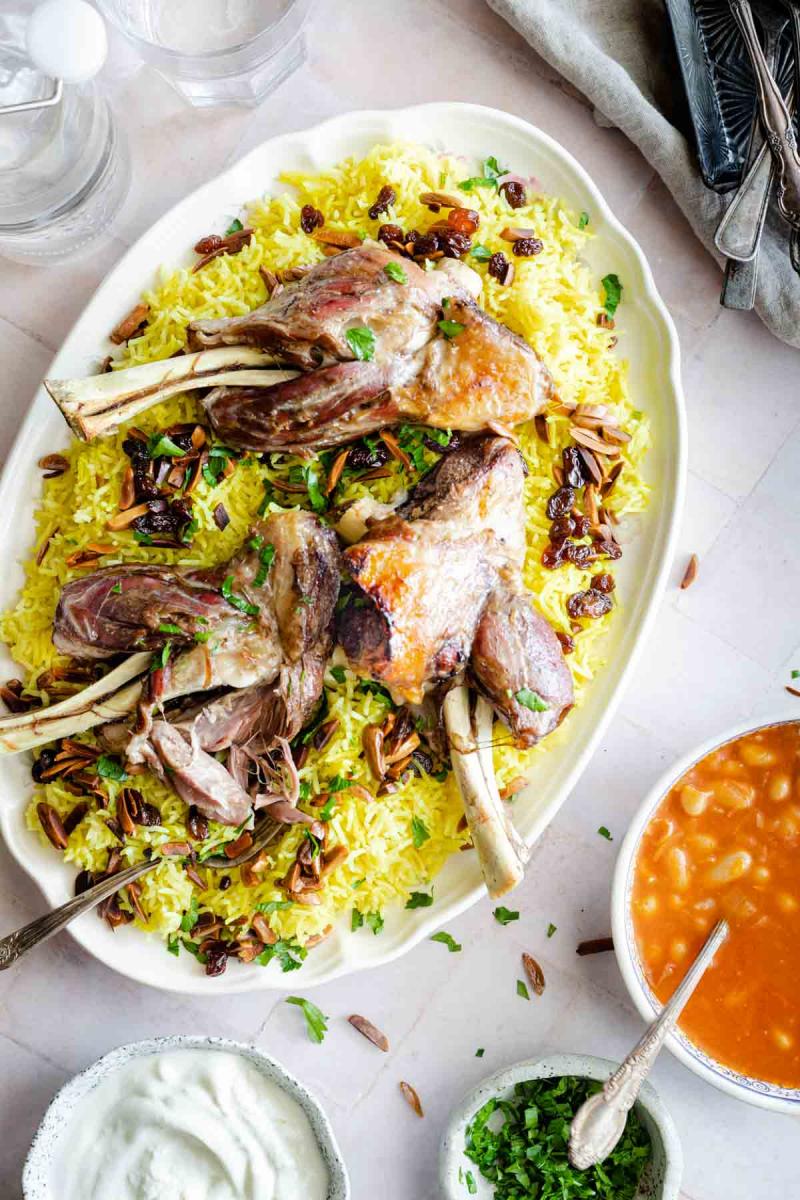 Quzi, also spelled as qoozi or ghoozi, is a rice-based dish popular and is considered as one of Iraq's national dishes. It is served with very slowly cooked lamb, roasted nuts, and raisins served over rice. The dish was introduced into Turkey by Syrian immigrants. 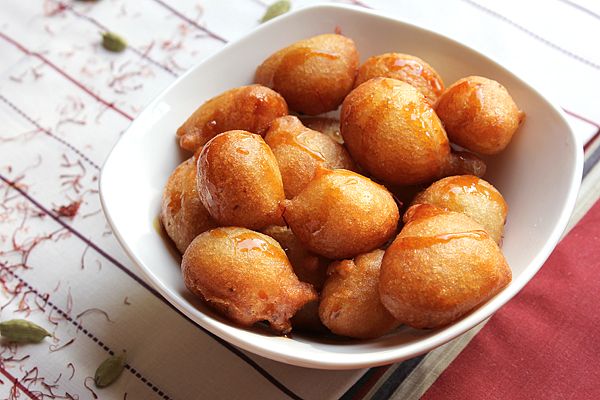 Luqaimat is a kind of Arabic sweet dumpling that could be described as doughnuts made with yeast and fried to a beautiful golden brown colour. This is similar to Nigeria’s “puff puff,” South Africa’s “vetkoek” and Zambia’s “fitumbuwa.” 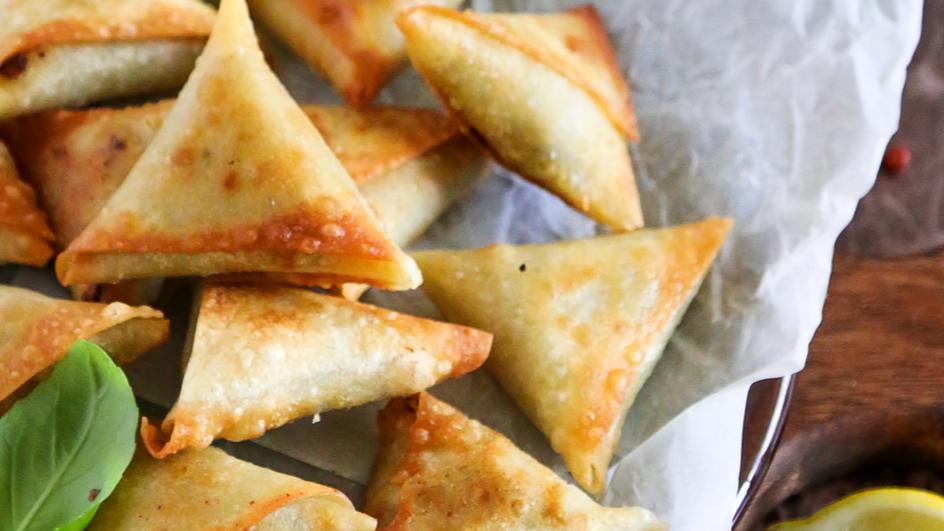 Popularly known as Samosa and Sambousek, Samboosa are fried or baked pastries with a savory filling. They are probably the most popular in the UAE and are believed to have been “imported” into the UAE from India. They can be filled with vegetable, chicken or meat mixtures. 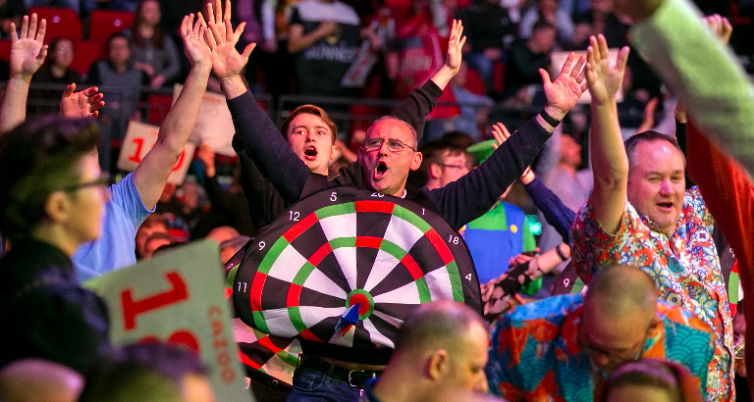 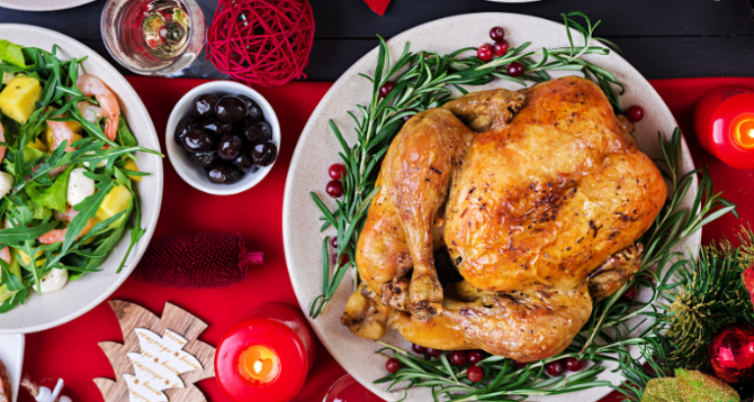 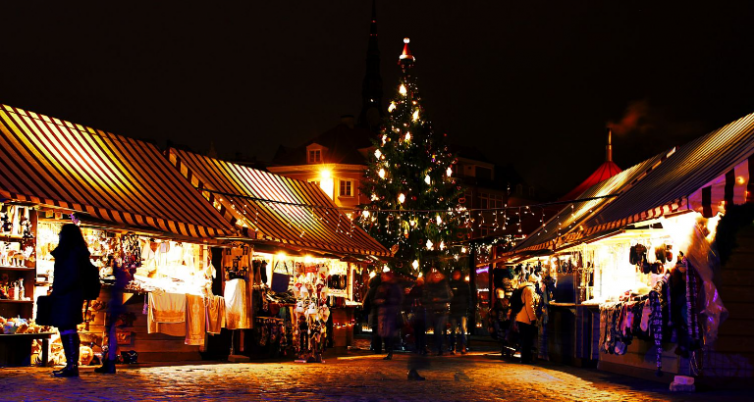