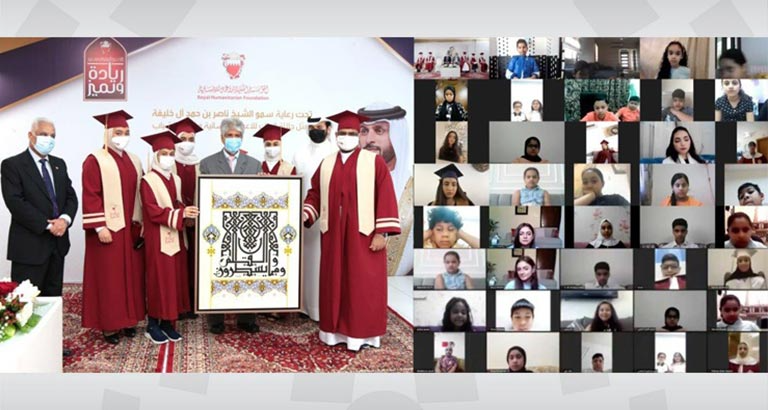 A total of 850 students were honoured during the online ceremony, including 21 top-achieving students, who were granted the Leadership and Distinction Award.

During his speech, Shaikh Nasser praised the great interest His Majesty King Hamad bin Isa Al Khalifa, the Royal Humanitarian Foundation (RHF)’s Honorary President, attaches to educating Bahrainis in order to enhance their academic level and provide all requirements for their progress and quality education.

HH Shaikh Nasser hailed HM the King’s keenness to ensure the distinction and success of Bahraini orphans, through providing them with distinguished educational care that enables them to pursue their educational careers successfully.

HH Shaikh Nasser extended heartfelt congratulations to HM the King on the outstanding success of the RHF-sponsored students as a result of HM’s constant fatherly care for all Bahraini orphans, and directives to provide them with all services, particularly their rights to education and decent life.

HH Shaikh Nasser lauded the unwavering support of the government, led by His Royal Highness Prince Salman bin Hamad Al Khalifa, the Crown Prince and Prime Minister, to the RHF, which has enabled it to undertake its humanitarian duties to the fullest. 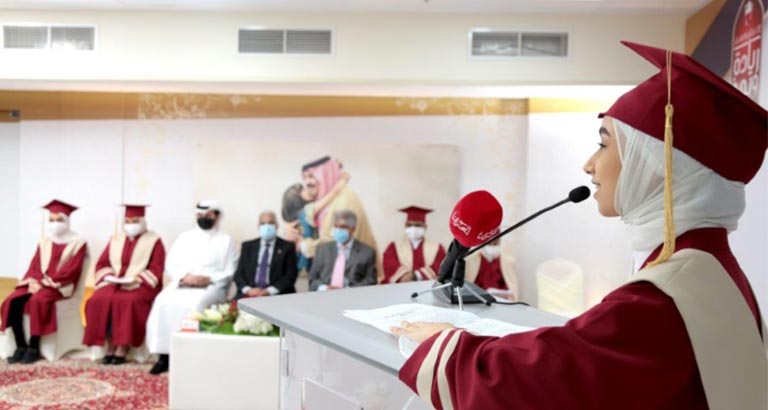 HH Shaikh Nasser congratulated the outstanding students and their parents on their distinction and success, despite the exceptional circumstance the entire world is going through due to the novel coronavirus, and which obliged them to study remotely.

In this regard, HH Shaikh Nasser lauded the cooperation of the Education Ministry, the University of Bahrain and all public and private educational institutions with the Royal Humanitarian Foundation to provide the necessary educational services for the RHF’s affiliate students, which contributes to achieving HM the King’s visions and aspirations to build a solidary society and promote humanitarian work in the kingdom.

During the ceremony, the National Anthem was played, some holy Quran verses were recited, and then a short film, telling stories of success and excellence despite the pandemic conditions, was shown.

After that, RHF Secretary-General, Dr. Mustafa Al-Sayed Al-Ameen, delivered a statement in which he extended deepest thanks and appreciation to HM the King for his fatherly care for the RHF’s affiliates, praising the support of the government, led by HRH Crown Prince and Prime Minister, for RHF.

He also paid tribute to HH Shaikh Nasser bin Hamad for his interest in the academic achievements of RHF-sponsored students, and keenness to ensure that they achieve success and distinction.

He also extended his heartfelt congratulations to the students’ parents, wishing everyone further success in properly raising their children in order to become good citizens who contribute effectively to serving and building their nation.

He also congratulated top-achievers who reaped the fruit of perseverance, noting that online learning had not prevented them from maintaining their high levels and achieving distinction.

Dr. Mustafa Al-Sayed honoured the recipients of the Leadership and Distinction Award.

Then, all outstanding students from all educational stages were honoured.