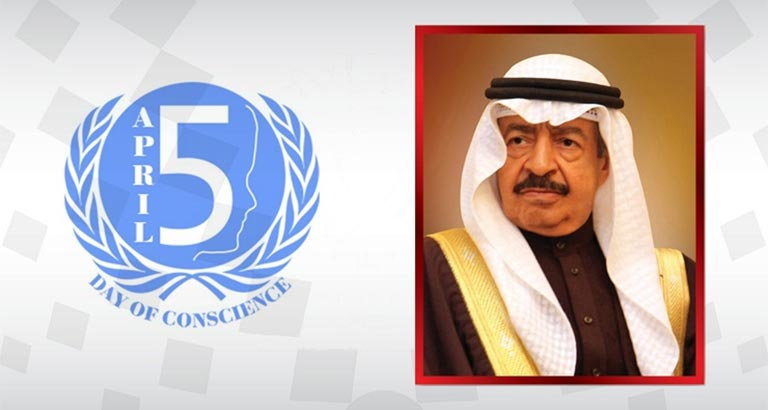 His Royal Highness Prime Minister Prince Khalifa bin Salman Al Khalifa, has stressed that in view of the present global challenges and exceptional circumstances, the world needs to enhance cooperation and human solidarity on the basis of a sincere conscience that promotes benevolence and hope, as well as bolsters humanity's joint quest for growth and advancement.

"The world today is facing major transformations, unlike anything it has ever seen before, because of the spread of coronavirus and the heavy losses it has inflicted," HRH Premier said, adding that "This requires a clear joint visualization to contain all the threats that humanity faces."

In a message to the world marking the International Day of Conscience (IDC), which is observed annually on the fifth of April, HRH Premier stressed the importance of the value of conscience as a human pivot that alerts the world to the necessity of shouldering its collective responsibilities towards everything that could bring human beings closer and fulfill the aspirations of the peoples for growth and stability.

HRH the Prime Minister expressed hope that the International Day of Conscience, which was the product of a personal initiative on his part, will be a factor that contributes to the achievement of joint aspirations for a world of peace and harmony.

HRH Premier pointed out that a vivid conscience is the hope all humanity to maintain the continuity of the stability of nations and peoples.

"Our initiative in calling for the observance of an International Day of Conscience stems from the values, principles, civilisation, and historical heritage of the Kingdom of Bahrain which combines culture, heritage, and the principles of true Islamic religion," HRH Premier said.

"Bahrain has lived and continues to live as a cohesive, developing society based on diversity and the multiplicity of civilisations and cultures,” the Prime Minister added.

HRH the Prime Minister noted that these sublime values have been enshrined by the Kingdom of Bahrain under the leadership of His Majesty King Hamad bin Isa Al Khalifa. These values were further entrenched in the National Action Charter and the Constitution that bolstered the values of freedom, equality, and justice for all.

"We have to arbitrate our conscience and the noble value it dictates in searching for solutions for the problems that are of concern to the world at present and that threaten its future," HRH Premier added.

He underlined that dealing with the crises humanity faces requires a vibrant conscience that interacts vigorously with all efforts for construction and development.

"Only a reassured and truthful conscience can uphold righteousness and inspire humanity in dealing with the crises of poverty and epidemics, as well as in attaining sustainable peace," he said.

HRH the Prime Minister stressed that we are facing a major responsibility towards the world's future and that the international community -- on the International Day of Conscience and on every single day -- must seek, under the umbrella of the United Nations, to lead and pioneer on the road of righteousness and to combat evil trends.

His Royal Highness the Prime Minister expressed hope that the will for benevolence, peace, and development, will prevail over calls for violence and hatred, and that the world will advance towards a future in which the achievements of civilisation are preserved for us and for future generations.

"God's behest to humanity since creation, through the prophets and messengers, has been cooperation, affinity, and compassion as the basis for the construction of the Earth and its wellbeing, and that conscience should be the ray of light and hope that will continue to direct us to everything that bolsters the values of goodness and peace," HRH Premier said.

He stressed the importance of the conscience everywhere converging in unity and harmony for the sake of a world based on cooperation, justice, equality, and respect for human dignity.

HRH the Prime Minister urged the intellectuals, thinkers, and social elite to undertake a pioneering role in promoting determination and harnessing the philosophy of conscience to serve humanitarian objectives and seek to develop joint international perceptions promoting security and reassurance.

HRH Premier called for eradicating hatred and rancor among peoples by entrenching the values of justice and harmony, and by promoting everything that guarantees for humanity its right to develop- and rise to the pinnacle of glory and dignity.

He emphasised the necessity to maximise all the potentials for change and the incentives for development that seek the welfare and happiness of humans. "Conscience is the strongest and loudest inner voice that guides us toward the future," he said.

"Provided that it is positive and effective, it will be the best expression of the most sublime objectives,” the Prime Minister stressed.

HRH the Prime Minister affirmed that open-eyed awareness of the mission of conscience relies on innovative interaction and that the enshrinement of conscience as a scale for self is the key that guarantees the continuing quest for all sublime values.

"Conscience will continue to be a beautiful illumination within human beings that promotes good deeds and is based on them," he said.

The Prime Minister said that the conditions in the world today, after the spread of coronavirus, have enhanced joint efforts and bolstered human unity in facing this threat which makes no distinction on the basis of race, colour, or creed.

HRH the Prime Minister said that the world needs today to draft new strategies that bolster the concept of "global health security" as an indivisible part of security in the comprehensive sense.

The Prime Minister said that the lesson gained from that crisis is that globalisation, in its traditional sense that is based on control and subservience, no longer has any place in today's world which is witnessing what might be called a shift towards "humanitarian globalisation."

He pointed out that, through the initiative of the International Day of Conscience, the Kingdom of Bahrain is very keen on conveying its message of civilisation to the world as a state of peace and compassion that has clear contributions to all international efforts for the progress of humanity and the achievement of permanent security and stable peace.

Concluding his message, HRH the Prime Minister expressed hope that this year's first observance of the International Day of Conscience would be the beginning for defining the framework and the rules for activating and reviving international conscience as a universal humanitarian value that advocates peace and compassion, and everything that promotes goodness, righteousness, justice, and equality.

His Royal Highness the Prime Minister again thanked the United Nations for its pioneering role in advancing knowledge and the culture of peace and highlighting the importance of conscience as an indispensable factor in advancement, development, and civilisation.