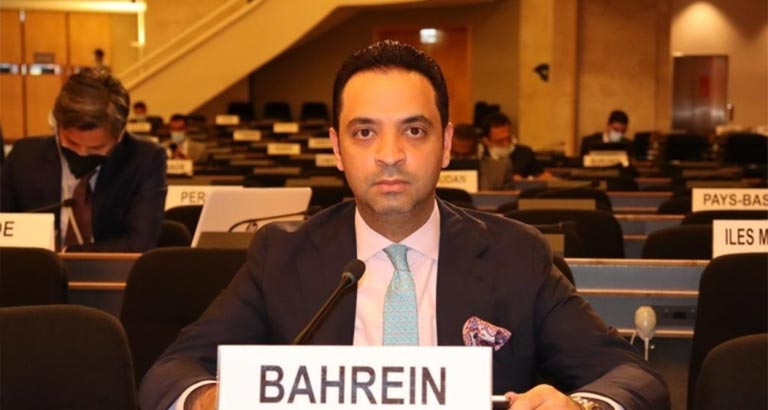 Bahrain voiced categorical rejection of the annexation of lands and forced displacement practiced by the Israeli authorities against the Palestinian people.

Deputy Permanent Representative to the UN in Geneva, Counsellor Hussein Makhlouq voiced Bahrain’s stance  during the Human Rights Council General Debate on the situation in Palestine and other Occupied Arab Territories, under agenda item 7 of the resumed 43rd session of the United Nations Human Rights Council.

Meanwhile, Bahrain welcomed the decision of the High Commissioner to create a database of the names of companies operating in Israeli settlements in the occupied Palestinian territories.

It said that this step would contribute to alleviating, albeit in a small manner, the grave and harmful violations that affect all aspects of the lives of the Palestinian people, especially those relating to the right to land, water, movement, education, family, and the enjoyment of a decent life.

Bahrain also expressed its aspiration that the High Commissioner will do everything necessary for the continuation of the annual update of this rule in implementation of Resolution 31/36 of the Human Rights Council.

It stressed the central importance of the Palestinian question and Al-Quds Al-Sharif to the Islamic nation, and its unlimited support to the Palestinian people in its pursuit of its inalienable national rights.

It called on the international community to assume its responsibilities towards other Arab lands and force the occupying authorities to implement the international legitimacy resolutions, which call for the complete withdrawal from the Golan Heights, the Shebaa Farms and the Lebanese hills of Kfarchouba.