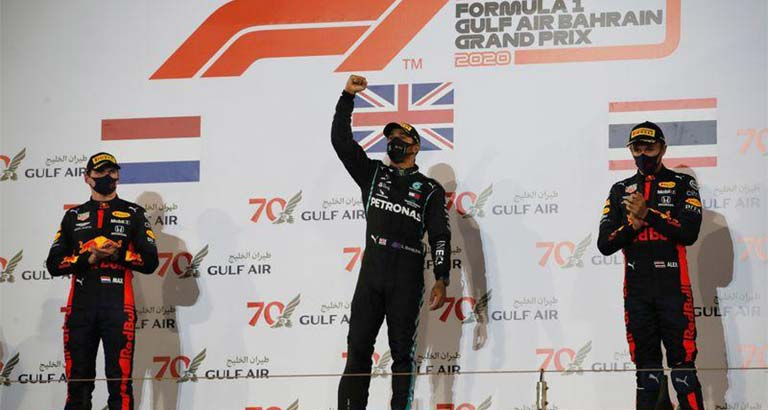 Lewis Hamilton won the Bahrain Formula One Grand Prix for Mercedes on Sunday after French driver Romain Grosjean had a miraculous escape from a fiery first-lap crash that ripped his car in two.

Grosjean’s Haas was engulfed in flames after it careered off the road at high speed and speared through the protective barriers lining the floodlit Sakhir track.

The 34-year-old managed to free himself from the wreckage and jump clear. He suffered burns to his hands and is recuperating in the Bahrain Defence Force Hospital.

s“It was terrifying to see,” said seven-times world champion Hamilton, who took his 95th career win ahead of Red Bull’s Max Verstappen, with the race ending under the safety car.

“It hits home for a driver, but I am grateful that he is safe and he was able to get out and it is a stark reminder of how dangerous this sport can be.

“It wasn’t easy to get back into the zone and into race mode but the race goes on and that is what we have to do.”

Grosjean was voted ‘Driver of the Day’ by fans.

Mercedes team boss Toto Wolff said they would have pulled out if the Frenchman’s injuries had been life-threatening.

“In this day and age a man’s health and life is much more important than a racing event or a sporting event,” said Wolff.

Grosjean’s crash brought the race to a halt seconds just after the start. It resumed an hour and 20 minutes later after repairs to the barriers.

Immediately after the restart Lance Stroll’s Racing Point was flipped upside down after contact with Daniil Kvyat. The Canadian climbed out unscathed and the safety car was deployed so his car could be removed.

The race then settled into something of a procession and Hamilton cruised unchallenged to his 11th win from 15 races this season, and fifth in a row.

Verstappen said he was unable to put any real pressure on Hamilton.

“We were just lacking a bit,” he said. “We tried to keep close but they always had an answer. It is what it is - second place is good.”

It was a Red Bull double on the podium as British-born Thai driver Alexander Albon took third from Sergio Perez after the Racing Point driver suffered a blown engine three laps from the end.

With both Racing Point cars failing to finish McLaren vaulted into third in the constructor standings, with Lando Norris and Carlos Sainz finishing fourth and fifth.

Ricciardo was seventh ahead of Mercedes’ Valtteri Bottas, who made a poor start and then suffered a puncture.

Esteban Ocon was ninth in the other Renault ahead of Charles Leclerc, whose Ferrari team mate Sebastian Vettel finished 13th.