Ferrari F8 Tributo makes its regional debut as the most powerful V8 Ferrari is unveiled in Bahrain! 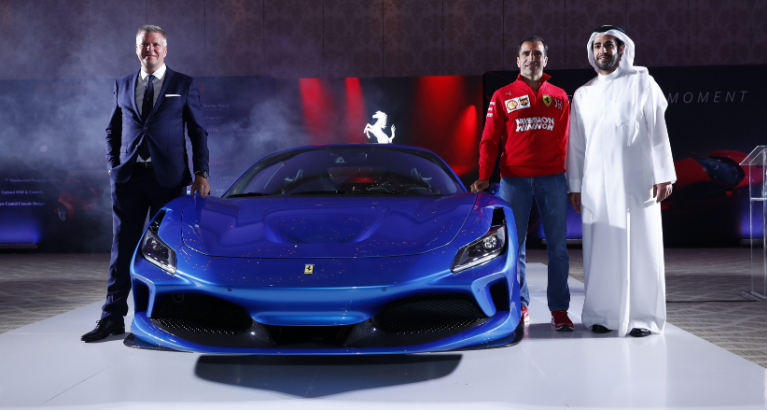 Following its recent global launch at Geneva Motor Show, the all new Ferrari F8 Tributo was unveiled yesterday by Euro Motors, the sole authorised dealer of Ferrari in Bahrain, in an exclusive event held at Hotel Sofitel Bahrain Zallaq Thalassa.

The F8 Tributo is the new mid-rear-engined sports car that represents the highest expression of the Prancing Horse’s classic two-seater berlinetta. It is a car with unique characteristics and, as its name implies, is an homage to the most powerful V8 in Ferrari history.

The F8 Tributo sets the market benchmark for performance, driving pleasure and ease of handling. It makes the exhilarating performance of the best 8-cylinder in the world accessible to all drivers, with unprecedented handling and superior ride comfort.

The F8 Tributo replaces the 488 GTB and, in the range, is the model with the highest performance matched by the greatest driver involvement. There are significant improvements across the board aimed at providing even better control on the limit along with greater on-board comfort.

In the automotive world, Ferrari’s V8 engine is seen as the very epitome of sportiness and driving pleasure. This is particularly the case when it is mid-rear-mounted in a two-seater. Ferrari has been honing the scope of abilities of this architecture, which creates an optimal weight balance, and thus delivers unparalleled thrillingly sporty driving, to perfection for over four decades.

Designed by the Ferrari Styling Centre, the F8 Tributo is essentially a bridge to a new design language that will continue to emphasise Ferrari’s key characteristics of high performance and extreme aerodynamic efficiency. In fact, the F8 Tributo is the most aerodynamically efficient series-production mid-rear-engined berlinetta ever designed.

The F8 Tributo features state-of-the-art aerodynamics, integrating innovations and expertise developed thanks to the company’s involvement in the GT and Challenge championships. The solutions have been honed to create a series-production mid-rear-engined berlinetta with the highest level of performance available.

It was only through close synergy with the Ferrari Styling Centre that the strict aerodynamic constraints could be so flawlessly interpreted and integrated into the car’s design. A good example is the S-Duct at the front and the redesigned blown spoiler system at the rear which are underscored by the car’s clean yet decisive lines.

The cockpit retains the classic, driver-oriented look typical of Ferrari’s mid-rear-engined berlinettas. Every element of the dash, door panels and tunnel has been completely redesigned specifically for the car. The F8 Tributo also boasts a new generation steering wheel and steering wheel-mounted controls as well as new styling on the standard seats.

Overall performance levels are significantly higher than those of the 488 GTB, thanks to the increase in power, weight reduction and improved aerodynamic coefficient. That performance is also now accessible to a larger number of drivers thanks to vehicle dynamics systems that make driving on the limit an easier and more confidence-inspiring experience.

The Ferrari F8 Tributo is expected to be on the roads later this year and is available only through Euro Motors, the sole authorized dealership of Ferrari in Bahrain.