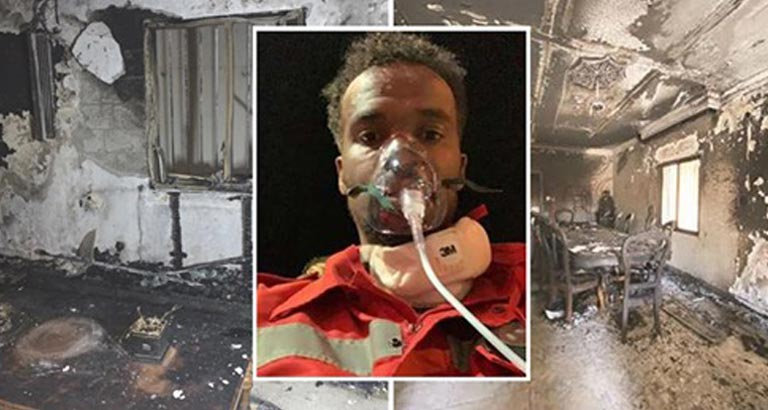 A heroic man clambered over rooftops and buildings to help rescue a neighbouring family trapped inside their burning house in Hamad Town last Thursday.

As reported by the GDN, Mohammed Salem, 33, an off-duty fireman who also works for Gulf Petrochemical Industries Company (GPIC), was washing his car outside his house, just down the road from where the blaze occurred, when he suddenly heard a loud screaming noise and saw smoke billowing in the air.

Six people were trapped upstairs as the blaze gutted the ground floor of the house, located in Block 1208.

Mohammed said: “I just ran to the house to see what I could do. The family was trapped upstairs and they couldn’t escape through the windows as they had metal safety bars installed across them.

“I have taken many courses abroad for firefighting but I had never seen a fire that large and scary. I realised that my only way in was through the roof.

“I jumped across the roofs of two homes to get to their terrace and saw the mother and her daughter pleading for help.

“I tried to break the metal bars on the window but couldn’t budge them so I jumped across two roofs once again, grabbed my ladder and hammer and went up again.

“While lowering the ladder from the roof, it fell on my face. My nose was hurting, but I knew I had a bigger job at hand and every second was precious.

“There were around 30 men outside who had tried to break into the house through the front door. They couldn’t as flames soon engulfed almost everything.

“The smoke was suffocating. I held my breath while breaking the metal bars.

“I was able to help the mother and one of her daughters out and asked them to sit on the side of the roof. I could hardly see anything as smoke had enveloped the property and neighbouring houses.

“One of the girls suffered from asthma and she was on the second floor now trying to throw herself from the window. She was hysterical but I managed to calm her down.

“Moments later the Civil Defence arrived and I heaved a huge sigh of relief. I knew everyone would be safe.”

The Civil Defence crews swiftly managed to get the fire under control.

Mohammed suffered from smoke inhalation, a broken nose and multiple bruises during the drama.

“If it wasn’t for him my mother would have never made it out alive so there are no words to expre­ss what he has done for our family,” the daughter said.

The Interior Ministry stated that six people were rescued from the fire. They suffered from the effects of smoke inhalation and were taken by ambulance for treatment.

“I’m so grateful that God has allowed me to save this family and I was taken to the BDF Hospital in the ambulance along with one of the girls,” he added.

“I was told that I inhaled a lot of smoke, my nose was broken, and I had multiple bruises on my body, but this is nothing compared to the lives that could have been lost.

“I urge people to have fire extinguishers in their homes because they can save lives.”

A 44-year-old Bahraini woman, who was inside the house when the fire broke out, said Mr Al Salem risked his own life to save her family.

“Mohammed is a true superhero – he put himself in danger to rescue our family as he jumped from roof to roof to get to my mother and sister,” she said.

“He was injured and suffered a broken nose during his efforts but that didn’t stop him. He deserves to be honoured.

“Words of gratitude will never be enough because he helped save my entire family from disaster.

“Within seconds the flames engulfed the entire living room and my mother was trapped upstairs. I managed to run outside and yelled for help.

“I could only watch helplessly as my entire family was trapped inside, but they were thankfully rescued in time and we are all extremely grateful.”

She added that the entire situation could have ended in tragedy and added that ‘no words of gratitude will ever be enough to thank those who came to our rescue’.

She said that the entire community came together and she expressed her gratitude to the National Ambulance, the Civil Defence and the Community Police who were on the scene.

The fire is believed to have been caused by an electrical fault in a downstairs air-conditioning unit.

“He put his own life at risk to save a family that was trapped in the burning home and he deserves to be honoured,” he said.

“This is the true spirit of Bahrain as the entire community always rushes forward to help those in need.”

He also said that official reports were being compiled by the Northern Municipal Council to begin the home repairs and restoration process.