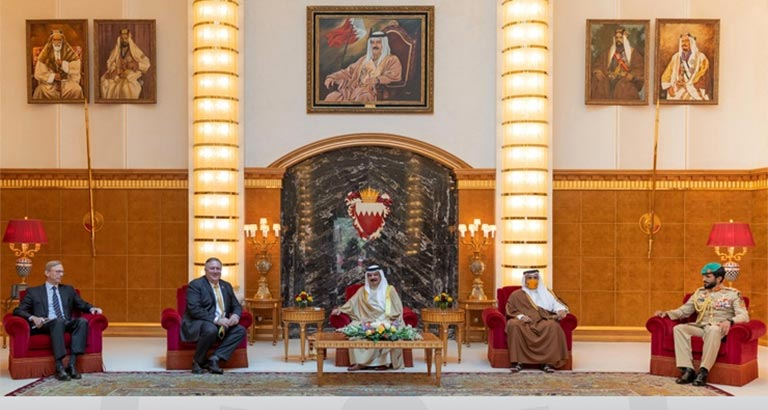 His Majesty King Hamad bin Isa Al Khalifa has affirmed Bahrain’s pride in its deep-rooted historical relations and close partnership with the United States of America that reflect a long history of mutual understanding, cooperation and coordination in a way that enhances their shared interests at all levels.

Secretary Pompeo is currently on a tour to several countries in the region.

HM King Hamad welcomed Secretary Pompeo and reviewed with him bilateral relations and the means of developing and boosting them and to enhance the frameworks for bilateral cooperation and joint action, especially in the political, economic and other fields.

HM the King stressed Bahrain's constant keenness to strengthen its strategic partnership and its aspiration to consolidate coordination and cooperation with the U.S. to achieve mutual benefits for the two friendly countries and peoples.

The meeting discussed the latest developments in the region and the initiatives and efforts to achieve stability and peace in it as well as regional and international developments. The two sides exchanged views on issues of common interest.

In this regard, His Majesty the King stressed the importance of intensifying efforts to end the Palestinian-Israeli conflict according to the two-state solution that achieves a just and comprehensive peace that leads to the establishment of an independent and sovereign Palestinian state with East Jerusalem as its capital, in accordance with the legal international resolutions and the Arab Peace Initiative.

HM King Hamad lauded the pivotal role of the US administration and its tireless efforts to advance the peace process, establish security and stability in the Middle East, confront Iranian interference in the region’s affairs, and promote international peace. HM King Hamad affirmed Bahrain’s support for these efforts and endeavors.

Secretary Pompeo expressed his gratitude to HM King Hamad for the gracious welcome and stressed the depth of the distinguished historical friendship and cooperation between the two countries.