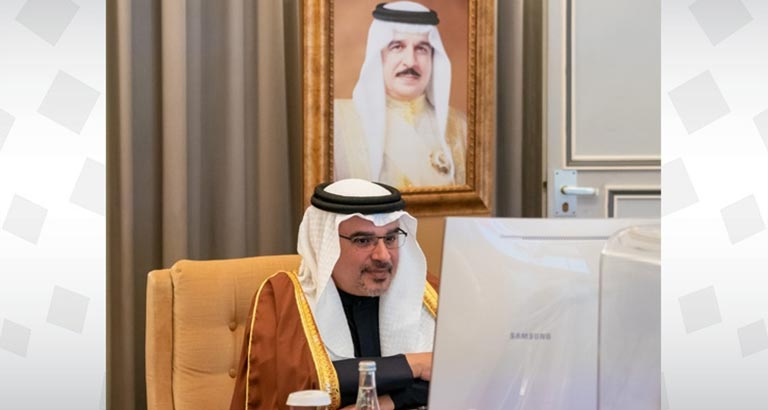 The Cabinet congratulated the Kingdom of Saudi Arabia under the leadership of the Custodian of the Two Holy Mosques, King Salman bin Abdulaziz Al Saud and His Royal Highness Prince Mohammed bin Salman bin Abdulaziz Al Saud, Crown Prince, Deputy Prime Minister and Minister of Defense of on the success of the 41st Gulf Cooperation Council summit meeting recently hosted by the Kingdom. The Cabinet commended the role played by Saudi Arabia developing joint Gulf action and promoting Gulf development, security and stability.

The Cabinet also congratulated Saudi Arabia on the launch of "The Line" project in NEOM, which embodies the rapid development steps witnessed under the leadership of the Custodian of the Two Holy Mosques and HRH Prince Mohammed bin Salman bin Abdulaziz Al Saud, the Crown Prince.

The Cabinet stressed the importance of the Bahrain International Airport expansion project in reinforcing Bahrain’s position as a primary centre for logistic services and a regional travel hub. HRH the Crown Prince and Prime Minister directed work to continue towards beginning operations on 28 January, taking time to thank all relevant authorities and personnel involved in this significant project.

On the occasion of Bahraini Diplomacy Day on 14 January, the Cabinet praised the accomplishments of the Kingdom’s diplomatic corps in enhancing Bahrain’s regional and international standings and relations through a balanced approach to foreign policy.

The Cabinet then followed up on the measures taken by the Ministry of Interior to assess damages suffered by Bahraini seafarers affected by the actions taken by the Qatari authorities, in order to compensate them. The Cabinet stressed that the security and safety of Bahraini citizens is a top priority and any violations against them are rejected. The Cabinet directed the Ministry of Interior to undertake all necessary processes towards releasing all citizens detained by the State of Qatar.

The Cabinet offered its condolences to the government and people of the Republic of Indonesia and to the families of the victims of the fatal passenger airplane crash and expressed the Kingdom’s sympathy towards all affected by this tragic accident.

A number of memorandums were discussed during the meeting. The Cabinet approved the following memorandums:

1. A memorandum from the Ministerial Committee for Legal and Legislative Affairs on a series of decisions aimed at strengthening Bahrain’s commercial environment, including regulation of online selling for foreign companies and regulation of e-commerce shops and auction sites.

2. A memorandum from the Ministerial Committee for Legal and Legislative Affairs on registration and safety conditions, and procedures to obtain a navigation license for small vessels transporting less than 150 tons of cargo.

3. A memorandum from the Ministerial Committee for Financial and Economic Affairs and Fiscal Balance regarding strengthening the governance of procedures for accepting grants by ministries and government entities.

4. A memorandum from the Ministerial Committee for Financial and Economic Affairs and Fiscal Balance regarding the transformation of the company ‘Export Bahrain’ to a closed joint stock company fully owned by the state, as part of the government's drive to increase Bahraini exports and pursue more international opportunities and export solutions for Bahraini commercial establishments.

5. A memorandum from the Ministerial Committee for Financial and Economic Affairs and Fiscal Balance regarding a Memorandum of Understanding between the Kingdom of Bahrain and the United States of America on increasing trade through several initiatives which promote Bahrain as a preference for US companies in the areas of business, distribution, and services, in addition to the expansion of facilities located in Salman Industrial City designated for bilateral trade with the United States.

7. A memorandum from His Excellency the Minister of Justice, Islamic Affairs and Endowments regarding the organization of the Sunni and Jaffari Endowment Councils.

8. A memorandum from the Ministerial Committee for Legal Affairs regarding the government’s response to two proposals submitted by the Council of Representatives.

1. A memorandum from the Ministerial Committee for Financial and Economic Affairs and Fiscal Balance regarding the committee’s work in the year 2020.

2. A memorandum from His Excellency the Minister of Interior regarding the amendment of the procedures manual for selling special registration numbers, and the amendment of two ministerial decisions related to the Traffic Law.