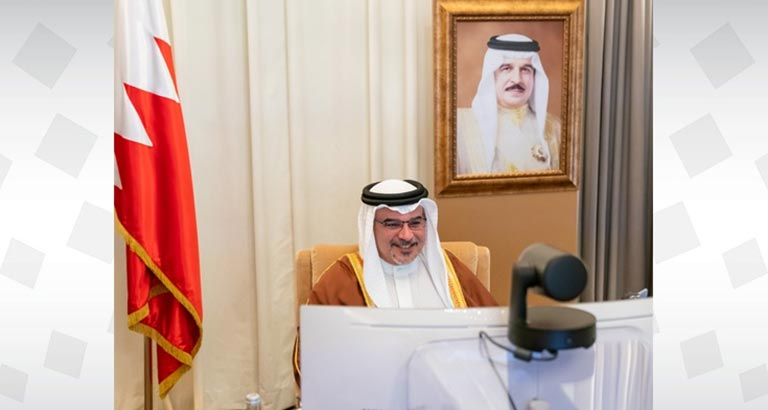 The Cabinet expressed its admiration of the speech given by HM King Hamad bin Isa Al Khalifa for Eid Al Adha, and praised HM’s support for the government’s response to COVID-19, which has successfully minimised the human and economic impact of the pandemic.

The Cabinet also praised the royal directives enacted to provide urgent relief aid to the Republic of Lebanon, expressing Bahrain’s full solidarity and support for the people of Lebanon following the explosions in Beirut.

The Cabinet extended its congratulations to the Custodian of the Two Holy Mosques, King Salman bin Abdulaziz Al Saud, and the Crown Prince, Deputy Prime Minister, and Minister of Defence of the Kingdom of Saudi Arabia, His Royal Highness Prince Mohammad bin Salman Al Saud, on the success of this year’s Hajj and for taking exemplary health measures during these unprecedented times.

The Cabinet also congratulated the President, government and people of the United Arab Emirates for the successful operation of its nuclear power reactor, the Barakah nuclear power plant.

Following the meeting, the Cabinet Secretary-General, HE Dr. Yasser bin Issa Al-Nasser, made the following remarks:

The Cabinet reviewed the biannual financial report 2020, for the period ending 30 June 2020. Total revenues collected have decreased by 29% YoY due to falling oil prices, with oil revenue decreasing by 35%. Non-oil revenue also fell by 13% YoY as a result of economic contraction driven by COVID-19 and the waiving of government service fees. The results showed discipline in total expenditures according to the budget and a decrease in recurrent expenditures compared to 2019. As a result, the BHD 798 million deficit reported in the bi-annual financial report for the first half of 2020 was an increase of 98% in comparison to 2019.

The Cabinet reviewed Bahrain’s final annual accounts report for 2019. Bahrain has recorded a favourable variance of 3.1%, with BHD 2,902.4 million in revenue collected, exceeding the budget target of BHD 2,815.7 million, while expenditure amounted to BHD 3,586.1 million, only 0.82% above the budgeted BHD 3,556.8 million.

The Cabinet reviewed a report presented by HE the Deputy Prime Minister and Chairman of the Ministerial Committee for Financial and Economic Affairs and Financial Balance on the work carried out by the committee throughout the first half of 2020. HE the Deputy Prime Minister confirmed a total of 22 meetings were held, during which 67 topics were discussed, including the 2019-2022 committee priorities, Bahrain’s BHD 4.5 billion initial and subsequent economic stimulus packages, reducing ministerial operation expenses by 30%, and the implementation of the Fiscal Balance Program.

The Cabinet approved the imposition of final anti-dumping duties on the Kingdom of Bahrain’s cardboard imports of origin from Spain and Poland, in accordance with the decision of the Industrial Cooperation Council at the Cooperation Council for the Arab States of the Gulf (GCC) regarding imposing final anti-dumping duties against the imports of GCC countries from the above-mentioned product for a period of 5 years. The Cabinet also agreed to take final preventive measures in the form of a quantitative restriction for a period of 3 years on GCC countries’ imports of chemical plasticizers, in compliance with the decision of the aforementioned committee to combat dumping against the imports of the GCC countries of the aforementioned product.

The Cabinet reviewed a draft law pertaining to external audit services, particularly in regard to keeping abreast with regulatory changes, increasing the number of qualified Bahrainis, and increasing the supply of such services to reduce prices and avoid violation delays. The Cabinet referred the draft law to the Ministerial Committee for Financial and Economic Affairs and Financial Balance for further study, following a presentation made by HE the Minister of Industry, Commerce and Tourism.

The Cabinet reviewed a report on legislative oversight achievements submitted by HE Minister of Parliamentary Affairs and praised the ongoing constructive cooperation between the government and the legislative authority during the second session of the fifth legislative term of the Shura Council and the Council of Representatives.

The Cabinet approved a memorandum submitted by the Minister of Electricity and Water Affairs on the issuance of a business license to the EHYAA Renewable Company to produce and sell electricity for the 100-megawatt solar power plant project.

The Cabinet referred to the Council of Representatives a draft law with a memorandum on the government’s opinion on a proposal of a law submitted by the Shura Council to amend some provisions of Law No (22) of 2018 regarding the Reorganisation and Bankruptcy Law.

The Cabinet recognised an old house in Isa Town as a national historical landmark and noted that Isa Town has one of the oldest housing stocks in the Gulf and is the first housing project in the Kingdom.

The Cabinet approved a proposal regarding the transition of notary offices to e-notary.

The Cabinet approved a proposal to provide an isolation ward for all incoming passengers who have visited countries with high COVID-19 infection rates and to conduct the necessary screening  alongside the efforts undertaken by the government in this regard.

In the item of Ministerial reports, the Cabinet reviewed a report submitted by HE the Minister of Education on the outcomes of the Arab League Educational, Cultural and Scientific Organization’s forum on the impact of COVID-19 on education.