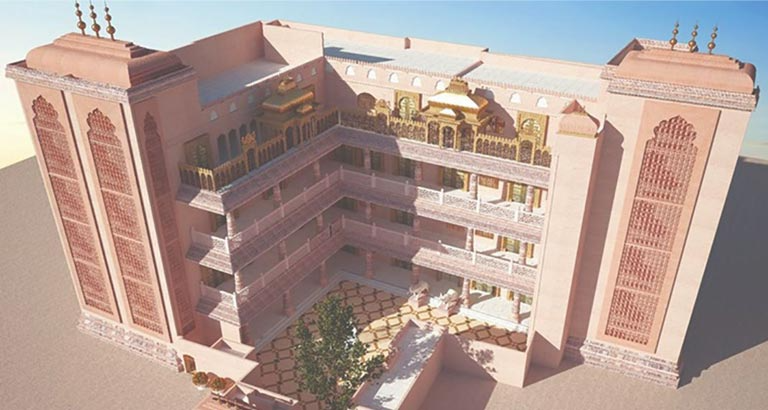 THE 200-year-old Hindu temple in Manama will soon be turned into a tourist destination, according to the GDN.

The iconic structure is set to undergo a $4 million facelift with work expected to start in the next six months, in plans presented by the Thattai Hindu Merchants Community (THMC).

The project was highlighted by THMC president Bob Thaker and vice-president Mukesh Kavalani during a meeting with the Bahrain Businesswomen’s Society (BBS) president Ahlam Janahi.

New designs to renovate the Shreenathji Temple in Manama Suq were unveiled in 2019.

“We are so happy that the temple is soon emerging as a shining icon amongst the touristic attractions in Bahrain as the THMC complex and temple,” Mr Thaker told the GDN.

“The complex will also be open for wedding functions with Bahrain being promoted for destination weddings.”

The project on the 45,000 square feet built-up area is set to be completed in the first quarter of 2024. It will include two massive state-of-the-art halls, three small meditation halls, offices, a knowledge centre and a museum in a three-storied building.

The completed structure will have 80 per cent more capacity with accommodation facilities for guests and visiting priests.

“We have appointed a reputed historian to set up the museum which is a highlight of the project,” said Mr Thaker.

“We have one in Mumbai, India, another in Karachi, Pakistan, and a research assistant in the UK, while we are soon finalising one in Bahrain as well.

“Work is nearly 30 per cent complete and the aim is to trace and document the history of the Thattai Bhatia community in Bahrain.

“We are also publishing a coffee table book reflecting the history of the community.”

In August 2019, visiting Indian Prime Minister Narendra Modi had inaugurated the renovation of the project.

“Even today, the temple is an attraction, a tourist and historical place that strongly demonstrates religious and social tolerance of Bahrain under the leadership of His Majesty King Hamad,” said Mr Kavalani.

“After being fully renovated, the beautiful structure will be added to the iconic touristic attractions in the region.”

Meanwhile, Ms Janahi said that the BBS was looking to revitalise co-operation with the THMC, highlighting its economic relations of more than 200 years with the Indian private sector in Bahrain.

“These relations can result in constructive and positive steps in order to strengthen commercial relations between businesswomen and Indian businessmen who are members of the society, and to develop the role of joint projects in serving the national economy.”

The society and THMC signed a co-operation agreement in May with the aim of achieving the common economic goals.

Ms Janahi also presented a copy of the book on the 20th anniversary of the founding of the society to Mr Thaker who lauded the efforts of BBS in leading the commercial women’s community in Bahrain, and its support to female entrepreneurs.