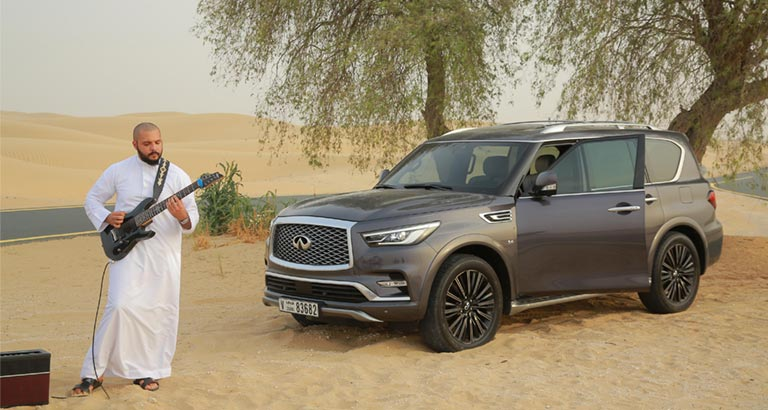 INFINITI Middle East has launched an exciting search to find aspiring musicians across the region to be the stars of its new INFINITI Academy Series.

The opportunity will give top vocalists and instrumentalists the opportunity to break through barriers by recording an exclusive studio track with prominent Emirati producer Kareem AlFadl of Arabian Panda Production.

“Professional studio time can be very expensive and present a major barrier for talented musicians when they start their journey, so we are very happy to be able to recognise – and reward – their drive to succeed.”

The competition follows on from the Journey of Life documentary series presented by INFINITI, of which the first season aired on November 27 2019 on infiniti-tv.com. Hosted by Nouraldin, the Journey of Life series shares the stories and experiences of ten inspiring individuals from the region.

Episode eight takes the viewer into the world of Kareem Al Fadl, also known as ‘Arabian Panda’ – a rock guitarist and producer who will be the host of the first INFINITI Academy. Building on Kareem’s wealth of knowledge in music and the art of musical production, he will give one lucky musician or band the opportunity to produce their own original song.

AlFadl said, “I was able to share my story through the Journey of Life series, and I now look forward to giving back to the music community through the INFINTI Academy. Musicians in the region do not always receive the support they need to continue developing their craft and the INFINITI Academy competition is a grassroots initiative that can enable the winner to take their music to the next level.”

To take part in the INFINITI Academy competition, up-and-coming musicians from are encouraged to upload a 30-to 60-second video that demonstrates their musical talent on Instagram using #INFINITIacademy and tagging both @INFINITIME and @ArabianPanda.

Musicians can take part in the competition starting tomorrow until March 20. The lucky winner will be announced on March 23.