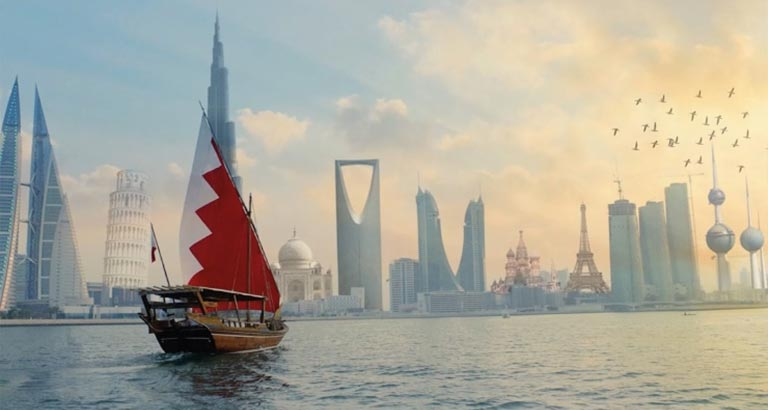 Within the framework of its promotional efforts for the Kingdom of Bahrain as leading and distinguished tourist destination and of increasing the number of visiting tourists, mainly the GCC citizens, to Bahrain soon after the elimination of Covid-19, the Bahrain Tourism and Exhibitions Authority has announced the launch of a new tourist campaign.

The new campaign, Ihnee Fee Al Bahrain, or Here in Bahrain, will coincide with #WEWILLMEET campaign, which was recently launched. The new campaign comprises three different stages over the year. The first, Inspiration, is linked to digital followers through interactive announcements and live sessions. The second, Encouragement, will focus on promoting existing activities, while the third,Transformation, will embrace direct live interaction with visitors, once events are resumed.

The Ihnee Fee Al Bahrain campaign will be a part of the second campaign, Encouragement, which is inspired by the song Ya Marhab Fddkum (which translates to ‘you are welcome’) by the Bahraini well known singer, Ahmed Al-Jumairy. The song was written by late Shaikh Isa bin Rashid Al-Khalifa on the occasion of the 1986 Gulf Football Tournament. The campaign will be launched on the Bahrain Tourism & Exhibitions Authority (BTEA) social media account while a set of artworks inspired from the song will be produced with the aim of promoting tourism in Bahrain.

The reason for selecting the song as a basis for the campaign is attributed to the song’s lyrics, which express longing for Bahrain and the beautiful description of the country’s hospitable features and people.

On this occasion, Dr. Ali Follad, Acting Director of Marketing and Tourism Promotion of the Bahrain Tourism and Exhibitions Authority, said: “We thought of launching the Ihnee Fee Al Bahrain campaign in line with BTEA's plan to post the positive media content through social media platforms and to focus on the image of the prominent tourist destinations of Bahrain, and to shed floodlight on both the artistic and cultural heritage from the point of view of the public and founder of the new media content. The campaign will comprise a series of promotional materials and initiatives, which aim at increasing interaction by the public using social media".

This initiative is part of the overall of BTEA's campaign, ‘Ours.Yours’, which focuses on promoting Bahrain’s tourist attractions over regional and global levels.  The aim is to highlight touristic elements and support the ongoing efforts that focus on enhancing the contribution of the touristic sector positively in the local product in line with Bahrain's Economic Vision 2030.