Royal Patronisation For Charter Of Gold 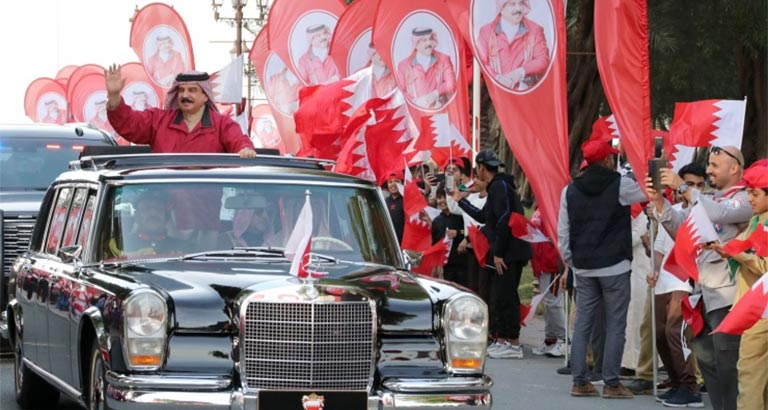 His Majesty King Hamad bin Isa Al-Khalifa has patronised a ceremony, under the theme ‘Charter of Gold’, celebrating the 19th anniversary of the National Action Charter (NAC).

He hailed the celebration, which marks a defining historic national anniversary in which the loyal people of Bahrain showed their cohesion and solidarity, ushering in a new phase for the nation. He also praised the ceremony for its celebration of authentic national values which mark the kingdom and its people.

At the conclusion of the ceremony, HH Shaikh Nasser bin Hamad Al-Khalifa presented His Majesty with a commemorative gift.

Commemorative photos were also taken to highlight the achievements of Bahraini champions who honoured the country with 390 achievements in 2019 – the Year of Gold.

The celebration included sports contests and other events, while thousands of students took part in a massive march from the University of Bahrain to the National Action Monument.

An art show titled Glorious Epic was also staged, narrating the history of the Al-Khalifa dynasty and rulers, from Nejd to Bahrain via Zubara and from the epoch of Ahmed Al-Fateh to the prosperous era of HM King Hamad.

Ro’ya Abdulmoman Al-Omari addressed the ceremony on behalf of the achievers, expressing deepest congratulations to HM the King on the 19th NAC anniversary, describing the milestone as a turning point in the history of modern Bahrain.

She paid tribute to the people of Bahrain who endorsed the charter by an historic sweeping majority of 98.4 per cent of the votes, affirming their unwavering allegiance to the leadership to ensure a bright future for the coming generations.