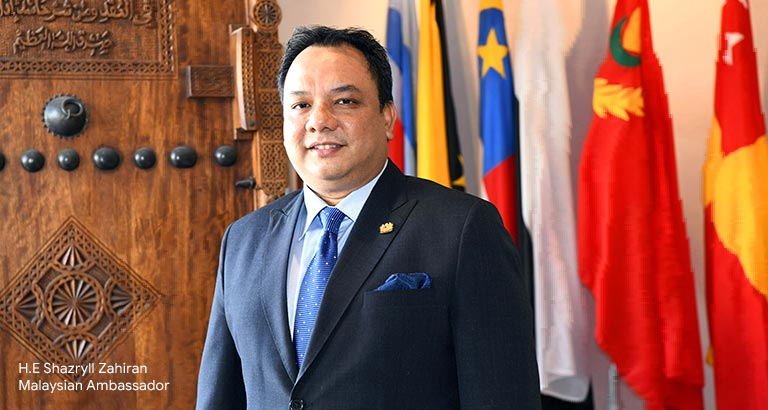 Bahrain and Malaysia have had a long-standing diplomatic partnership, with the Embassy of Malaysia established in 2003, enabling bilateral political collaboration on aspects such as commerce, trade and investment. This month, Bahrain This Month’s Kristian Harrison spoke to the Malaysian Ambassador to the Kingdom of Bahrain, Shazryll Zahiran, about his diplomatic career and his plans to bolster ties between the two nations.

Thank you for talking to us, Your Excellency. Firstly, can you tell us about your fascinating career so far?
I’ve been in service for 22 years, although the first seven of those was actually in the private sector. After studying Economics and Business Studies, I joined several multinational companies including Rothman International, Matsushita and Ernst & Young. Then I joined Malaysia’s largest automobile dealership, Produa.

I then joined the diplomatic service and worked in Bosnia for five years. I felt that I could contribute more to society in this field as opposed to business; I believe I’ve always had an inclination of giving back to people and with my history in the commercial industry I had an opportunity to do that.

I then returned to Malaysia, taking a government post centred on trade and economics, during which I was sent abroad for various postings and training, the most important of which was in the Vietnamese city of Ho Chi Minh. It was actually a real eye-opener for me because knowing how Vietnam is, it is a growing economy, a very strong, very vibrant economy and I learnt many lessons there. We tripled the trade volume between Vietnam and Malaysia which I’m hugely proud of.

A shift to security and counter-terrorism followed and then eventually I ended up in Bahrain last July, which is actually my first ambassadorship.

Do you think diplomacy and how it is conducted has changed throughout your career?
It has definitely changed and is now embracing the new environment we live in. With mass media, WhatsApp and other platforms, news travels fast in a matter of seconds. With COVID-19 this has accelerated even further and put us on our toes as we work through an experience that is unprecedented. One major positive of this and the digital revolution to the service is that the younger generation are being enticed to diplomacy as a career and we have seen much more interest from them.

What was your mandate when you took the post in Bahrain?
Obviously, it was to primarily bolster the union between our two countries which has always shared a close brotherhood between our leaders. The relationship between Malaysia and Bahrain is one both sides treasure.

Secondly, we have a marketing strategy to boost Malaysian investment and use the Bahrain market as an important gateway into the region, thanks to it being so business-friendly.

What do you think your greatest achievement has been so far during your tenure?
I think it’s too soon to talk of achievements, but I am proud of how much the economy is continuing to rebound and improve after the pandemic. I’m excited to see how it will expand and revive. Also, I think that since I’ve arrived here I’ve opened some doors in terms of Bahrain expanding into the world market rather than focusing domestically. The Bahraini leadership has been so forthcoming and encouraging, it’s been a pleasure to work with them.

How has the COVID-19 pandemic impacted your diplomatic mission in Bahrain so far?
Ultimately, you need to have that human touch, the face-to-face meetings and whatnot to show presence. However, that hasn’t always been possible so there has been a necessity for video conferences. I think at the beginning, 70 per cent of my engagements were digital, but now with Bahrain opening up again after the great work done by its leadership to combat COVID-19, I’d say that has flipped.

What can you tell us about the historic relationship between Bahrain and Malaysia and how will it develop in the future?
Our embassy first opened in Bahrain back in 2003, but our relationship began way before that and has grown over time. I am now the fifth ambassador here and we have always supported the development of Bahrain, particularly in the construction, banking and financial sectors.

We are seeing more Malaysians in the public sector; as engineers, technicians, government workers and more. It’s been fascinating to see how the working relationship has advanced in the past couple of decades.

Going forward, our relationship continues to grow as new industries and opportunities open up. We are seeing huge investment from our side into renewable energy, waste management, medicine, education and the agriculture industry.

In return, I’d like to boost Malaysia’s profile and highlight the tourism aspect of our nation, which is an incredible, diverse place to visit! The connectivity between the two countries is something I definitely believe needs to be addressed, and I am actively trying to facilitate regular direct flights between both. 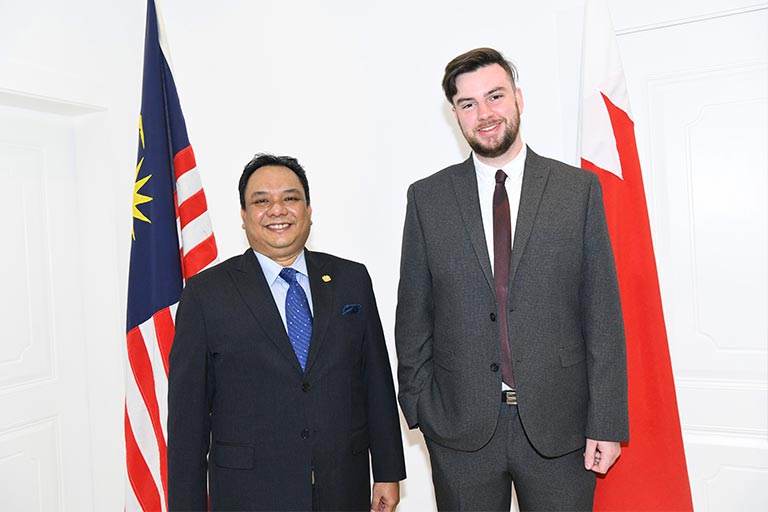 How many Malaysians live in Bahrain currently?
We have approximately 300 to 400 Malaysians here now, sadly a number that has almost halved since COVID. However, we do have Malaysians who have been here for more than 20 years, who I am delighted to represent.

Could you tell us about the role of cultural exchange between the two countries? Do you have any events planned in the near future?
Definitely. When we talk about relations between two countries, an exchange of culture and understanding is just as important as finance or politics. I do have some plans in the pipeline and it is my goal to showcase Malaysian culture considerably during the coming years of my tenure both from the community here and also to bring people in for Malaysia for special events.

Do you have a message for the people of Bahrain?
I think that one thing for sure that I want to register is my appreciation to the people and leadership of Bahrain, who have been very warm and very forthcoming in many aspects of the acceptance of my presence here. It has been a smooth transition for me. I have an open-door policy, I›m reachable to anyone and thus would like to see engagement between both countries on all levels, not just at the highest leadership level but also people-to-people.

During my time here, I hope that enthusiasm continues to be there and people are willing enough to respond positively to my ideas and to give me feedback and necessary support. I believe we can work together to make our relationship successful in a number of fields.