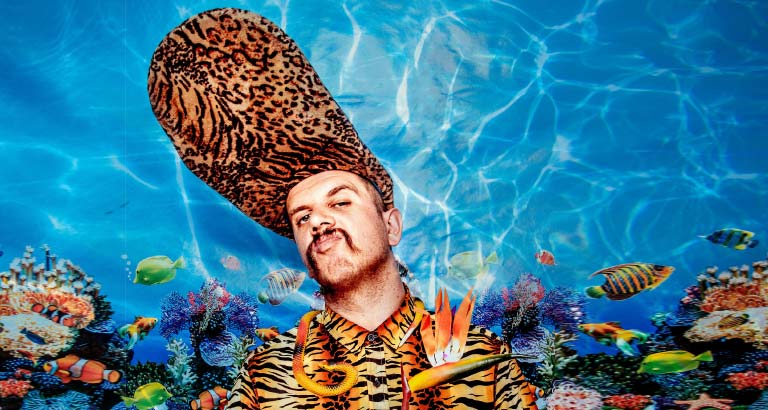 Jack Parow is coming to town, so Liz O’Reilly quizzed the South African rapper to find out what makes him tick.

Why did you take the name Jack Parow? Is there a story behind it?
I had a few different names before Jack Parow and then one night I came home from a party and Pirates of the Caribbean was on and I said “Who’s Jack Sparrow the pirate of the Caribbean, I’m Jack Parow the pirate of the caravan park.” First it was a joke and then it became my name. I was also born in a place called Parow which is a bit of a trailer park kind of place...or as we call it in South Africa, Zef.

You began rapping in English then changed to Afrikaans, what prompted the switch?
I never felt that I was really being myself when I was making music in English. Then one day I just decided, today is the day, I’m going to start writing in my own language, maybe that will help. And it did, I couldn’t stop writing and from that day on, I only wrote in Afrikaans.

For those who might not be familiar with your work, what kind of themes do you cover and will non-Afrikaans speakers be able to understand/appreciate your act?
It’s just a fun party vibe. It’s about having a good time. I am lucky enough to play all over the world and even places like Hong Kong and Russia, where a lot of people at my shows barely even speak English, they keep coming back show after show because at the end of the day its more about a vibe. If you feel the music and the energy is there, it doesn’t matter what language you speak.

Your first release, Cooler As Ekke (cooler than me), made number one – did you have any idea it was going to be so successful?
Never, I was just in this fancy club and was getting so annoyed with everyone thinking they were so cool and better than everyone just because their watch is more expensive or their shirt or their shoes or whatever. I literally walked out ticked off and wrote it in my car under a street light in front of the bar. Then I decided later to record it and it just blew up. Seems like a lot of people felt the same. Haha.

Did life change for you pretty quickly after that?
Yes, it did, I must say, I went from never even being on a plane to flying to Europe on a Friday, then the States, then Mexico et cetera. It was just such a crazy whirlwind at the start. Now, I’m a bit more used to it and also a bit pickier about touring and where I go, so I don’t burn out.

What is it about your music that people relate to?
I think it’s just because I’m honest and true, in my music, to how I feel and who I am and people feel that and I think they relate to that.

You’ve since toured all over the world. What made you decide to play such a concert in Bahrain?
Firstly, I’ve never been to Bahrain and I really want to see it, so, I’m super excited about that. And then, secondly, I love making music, I love seeing the world and I love making new friends and meeting new people, so I can’t wait to come party!

Where has been your favourite place to play, so far?
That’s a difficult question. Every place has its own vibe, so I can’t really say. I obviously love playing South Africa because it’s my home country, but then, Netherlands is also great because the crowds are crazy and London as well. I’ve played some shows in the Middle East too and those have been amazing, we partied till the sun was up...see! Once I start! Haha.