Being a Good Sport! 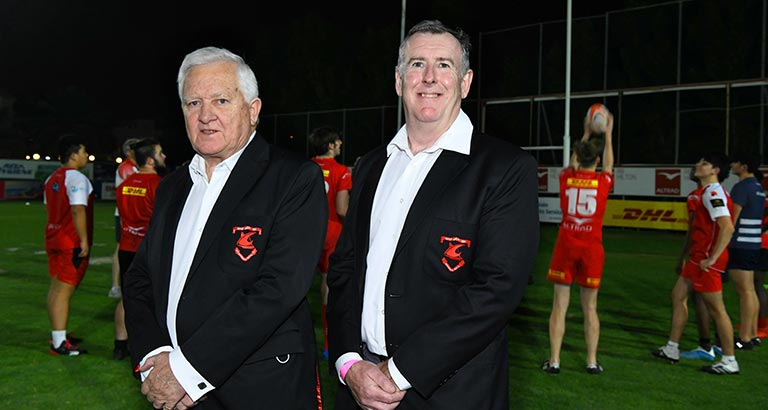 Bahrain Rugby Football Club (BRFC) has been one of the most popular expatriate clubs in the Kingdom for over 50 years. Farah Baig speaks to the BRFC Chairman, Mike Cunningham, and BRFC President, Michael Stapleton, about its success in the past and plans for its future.

The Kingdom of Bahrain has grown to be home to hundreds of thousands of expats over the years. While Bahrain has proven to be a safe haven for all, being in a new and unfamiliar country has its challenges. That’s where social clubs like Bahrain Rugby Football Club come in; the sports-centric social club has proven to be a ‘home away from home’ for members since its establishment in 1971.

Strolling through the sprawling social club in Janabiyah, it’s hard to believe that the club had its humble beginnings as a section of the British Club in 1971. “Bahrain Rugby Football Club became its own entity in 1974 when it took up a perimeter of the ground at the Bahrain International Airports Muharraq Runway,” states BRFC President, Michael Stapleton.

Sports At the Heart of It All
Over the years, the club has grown and expanded, finally settling in its current location which most people recognise. The BRFC has a number of pitches, netball courts, cricket nets, a sports hall, gymnasium and a 25m swimming pool aside from the hospitality venue, Mano’s, and children’s play area too.

“Our main operations revolve around sports; we run cricket, netball, football and badminton, with rugby being the priority, of course! We’ve also had the Bahrain National Cricket team come out here to practice on the grass pitch,” says Mr. Stapleton, adding that the club aims to nurture the presence of sports in the Kingdom through collaborations with the community.

The club has participated in and hosted several matches over the years. In fact, BRFC won the 7s Plate Championship in Hong Kong in 1978. The team then consisted of Richard Turnball, Grant Haskell, Phil Griffiths, Richard Duck, Ross Aldrige, Fred Simmons, Michael Stapleton, Jeff Evans and Dave Billington, and was managed by Bill Tyler. “It’s a team sport, you cannot play on your own so you create life-long bonds – they become your best mates. So, a number of ex-players and supporters all stay in contact with each other,” says Mr. Stapleton.

The club has roughly 100 people training for Gaelic football which has grown tremendously over the last six or seven years, with the team travelling for matches too. “We have a set of nets and on average we have about 120 players from the social clubs and select schools who train here at times. We also host schools’ sports days, camps, tournaments and more,” says BRFC Chairman, Mike Cunningham.

Building a Community
As the popularity of the club grew over the years, so did the number of members. “We currently have 4210 members, including adults and children from 63 nationalities. We also have over 65 staff members,” says Mr. Stapleton.

With regards to membership at the club, priority is given to families and those who participate in sports. “Sports is a big thing and many people came here to play sports, but what we’ve really done is focus on the families by giving them a nice safe environment to socialise in. Being at BRFC, people could relax knowing that their kids would be safe: that they would not be able to leave the area or have outsiders enter the club,” says Mr. Cunningham.

“Younger kids also have access to the children’s play area and facilities like inflatable castles while games are on so people could come watch the game,” he adds.

“HH Shaikh Nasser has a vision of Bahrain developing excellence in all the sports, as does HH Shaikh Khalid so they see places like this where the youth can come and learn a sport as vital in that growth and development,” he adds.

With sports, children are taught the values of camaraderie – working as a team all while staying fit. “I think that is the main message that HH Shaikh Nasser is sending: that it’s great to be successful as a country, but it’s also important to have a healthy population through people playing sports and participating for the benefit of their mental and physical health,” says Mr. Cunningham.

Last year, BRFC hosted First Deputy Chairman of the Supreme Council for Youth and Sports, President of the General Sports Authority and President of Bahrain Olympic Committee, HH Shaikh Khalid bin Hamad Al Khalifa for the Bahrain Gaelic festival. “We had around 40 teams coming from Ireland and the UK to participate in the event. HH Shaikh Khalid presented the trophies to the winning teams,” says Mr. Stapleton.

Rugby in Bahrain
With the inception of the Rugby Board for Bahrain, an initiative by HH Shaikh Khalid, new life will be breathed into the presence of the sport in the Kingdom. “The entity will be separate from the BRFC and intends to promote rugby in the Kingdom with an emphasis set on schools… similar to what was done in Hong Kong which now has a strong presence in rugby in Asia,” explains Mr. Cunningham.

Most students in Bahrain tend to veer towards football and basketball, but Mr. Cunningham believes introducing them to the sport while they are young will build an interest. “Once the board is established, we will give them all the input they need and help them appoint somebody to start it in the schools,” he says.

The Royal Rumble
Boxing enthusiasts are in for a treat this month as BRFC will be hosting a spectacular sporting event to raise funds for the Royal Humanitarian Fund. “The Royal Rumble Charity Boxing Dinner is being held on February 4under the patronage of Supreme Council for Youth and Sport First Deputy Chairman, General Sports Authority Chairman and Bahrain Olympic Committee President Shaikh Khalid bin Hamad Al Khalifa, in partnership with the Bahrain Boxing Federation,” states Mr. Cunningham.

During the event, boxers from Bahrain’s Royal Guard will go head-to-head with The Royal Regiment of Fusiliers. “I had initially discussed having a boxing event at BRFC with Tony Davis who is the coach at Bahrain Boxing Federation. When HH Shaikh Khalid visited the club to talk about sports, he decided to organise something special which would put Bahrain on the map,” he says.

The event will also be attended by International Boxing legends, Joe Calzaghe and Darren Barker, who will be flying in for the event. “It’s actually going to be a very exciting weekend. In fact, Joe and Darren will both be at the weigh in the night before the match which will be open to the public,” he concludes.