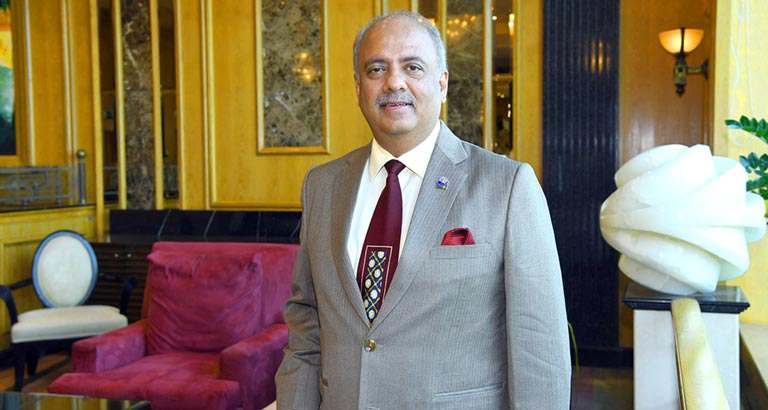 Rotary International President, Shekhar Mehta, tells Bahrain This Month about the organisation’s key achievements, his priorities as president and more.

It was almost exactly 20 years ago when the last Rotary International President, Richard King, graced Bahrain with his presence. On that occasion, it was a short stopover for Mr. King who was whisked in from the airport for a couple of hours to meet the great and the good in the Kingdom of Bahrain.

At the end of November 2021, the current Rotary International President, Shekhar Mehta made a long-anticipated visit to the Kingdom of Bahrain together with his wife, Rashi. BTM publisher George Middleton met up with him during their stay and reports below:

When and how did you first get involved with Rotary International?
Well, a friend of mine, Chandan Chowdhury, asked me to join Rotary and I said yes. So, I started attending the meetings and it was really a question of it being a baptism by fire. As soon as I joined, they asked me to do a fundraiser and of course I had no clue what to do. But I tried, and everybody contributed and the project was a great success.

Was it a desire to commit yourself to charitable works that encouraged you to take part?
Absolutely not; my prime purpose in joining Rotary was to make friends and network to be perfectly honest. I did not know that I would get so deeply involved in service.

Which of the charity projects that you have been involved with are you most proud of and why?
The literacy programme that we started from scratch holds a special place in my heart. It became one of the leading literacy programmes in India by any NGO, and in the Rotary world it is certainly the biggest educational programme bar none. In particular, I am very proud of the fact that over 3,500 out of a total of 4,000 clubs in India have participated and now the initiative is being implemented in Africa.

Since we have not had to make any major changes, it proves that we were on the right track.
Do you have any other initiatives that you are particularly proud of?
Actually, the heart surgery programme is particularly close to my heart. We have enabled over 2,500 operations so far where I have personally been involved and throughout India, we have affected almost 20,000 in total. The majority of these people are destitute and would have no means of funding such operations.

What are your top priorities as Rotary International President?
Actually, it’s twofold; one internal and the other external; basically, grow more and do more. Grow more is the internal goal and do more is the external goal. Grow more because we want our numbers to grow from 1.2 million to 1.3 million. We have 200,000 rotaractors and I want them to become 300,000; so, Rotaract and Rotary combined should become over 1.5 million.

We don’t micromanage our clubs as far as decisions on which initiatives to support and implement. We assume that they would have local knowledge on what the most pressing priorities are in this regard.

We have defined certain areas of focus; such as sanitation and hygiene, basic education literacy, developing local economies, working for health and peace etc. Of course one of our most popular programmes is the polio eradication programme which of course is an amazing success story. When we started it 40 years back, 350,000 children were being afflicted by it in 125 countries.  This year, those 125 countries have been reduced to two countries only; Afghanistan and Pakistan and those 350,000 children have now come down to only four this year. Our greatest ambition is to eliminate this disease completely and we believe that we are almost there thanks to Rotary International and its partners!
This year is all about the empowerment of women.

Rotary is generally perceived as a man’s club. In these times of supposed greater equality, what are your thoughts on the appointment of Jennifer Jones as your successor?
Woman make up half of humanity and it is only reasonable that they should have half the opportunities; the world should become a better place for all people. Of course, I am delighted! We have been paving the way this year since out of the 19 board members, nine of them are women. And one of the most able of them is with us today Katerina Kostali-Papadimitrou, an outstanding Rotarian who heads a very important committee at the board level.

After 36 years in Rotary, and reaching the ultimate position as international president, do you have any further ambitions left to fulfill?
Personally, I have no further ambitions. In the journey of service there are only milestones to achieve, no goals, because there is no end to the problems we are facing. We keep serving because these issue continue today and tomorrow. So, as far as the organisation is concerned, we do hope that it will be acknowledged as one of the most powerful instruments of service internationally. We have recently been nominated for the Nobel Peace Prize; frankly that would be a well-deserved accolade in my opinion. We hope the organisation itself will reach 1.5 million Rotarians and 300,000 as far as Rotaract is concerned.

How do Bahrain’s Rotary clubs compare to elsewhere in the region as well as internationally?
I would never compare any Rotary club with another Rotary organisation. One club can be an inspiration for another because each of them run under different circumstances. A club in Bangladesh would have far more to do from a charity perspective for instance, than a club in Bahrain when taking into account the needs for water, sanitation, education, developing local economies etc. In Germany, Japan, South America and India, the ethos is completely different amongst Rotary members as are societies challenges and requirements.
I would just like to mention that Bahrain Rotarians are extremely committed; their profile is very good. My visit may give a bit of direction as far as programme implementation is concerned and I’m also encouraging them to work in other countries. We are hoping to expand very soon in Abu Dhabi, Saudi Arabia and Oman.

Who is the world’s greatest Rotarian?
Paul Harris; the guy who started it all with his incredible vision. If you read his books, you’ll be amazed. For instance he says, “Tolerance is the cornerstone of Rotary”. This concept is so important even today, a century later.

“It means things have truly changed at Rotary,” she says although qualifying statement saying that gender doesn’t determine whether you are a leader or not. “Women have to prove their leadership credentials at Rotary International. Our leaders are chosen for their roles based on their skills and their talents whether or not they are male or female,” she stipulates.

Rotary International runs a clearly defined election process resulting in the confirmation of a senior leader, district leaders or regional leaders, according to Katerina. “We have quite a number of women as regional leaders although the majority are still men. Currently 24 percent of Rotary members are women. Men have been in Rotary 60 years while women have only been able to join in the last 34 years. It is expected that in the next 10 years, the male-female ratio in Rotary will be more balanced”.